One of the unfortunate truths about boxing is that a match-up between two great fighters does not always make a great fight.  The May 5th bout in Las Vegas between Floyd Mayweather Jr. and Miguel Cotto is a perfect example of why not.

It would be hard to deny either of these two men the “great fighter” label .  Mayweather (42-0-0, 26 KOs) of course has the undefeated record that speaks for itself.  Make no mistake either, despite what some of his more vocal detractors might insist, “Money” didn’t get where he is by picking on 42 tomato cans.  Among those victims are 16 men who have held some version of a world title and at least three sure-fire hall of famers.  Floyd has been among the elite pound-for-pound rankings for well over a decade without ever losing a fight, a feat that obviously puts him in rare company. 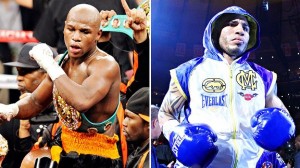 Cotto (37-2-0, 30 KOs) may not quite have the pedigree of a Floyd Mayweather, but he’s certainly a very accomplished prizefighter.  With championships in three separate weight classes and a 17-2 record in title fights, the Puerto Rican star will almost assuredly find himself in Canastota, New York giving a hall of fame acceptance speech once his career comes to an end.

Why then is this fight being met with a collective shrug of the shoulders from boxing fans and members of the media?

Well for starters, Mayweather fighting Cotto means that Mayweather isn’t fighting Manny Pacquiao.  The super-fight between boxing’s two biggest names has once again been put on the back burner due to failed negotiations, and the disappointment that goes along with that will leave boxing fans with a bitter taste in their mouths regardless of who the two rivals are matched up with instead.

Another issue is that as good as Cotto is, it is generally assumed that Mayweather is much, much better.  Like is always the case in any Mayweather fight, Floyd will be a strong favorite for good reason.  The fact that Cotto has been badly beaten twice since this fight was first discussed years ago certainly doesn’t help the perception that he doesn’t have much chance.

To play devil’s advocate though, there is some reason to think that this older version of Cotto could have as much chance to be competitive with Mayweather as he would have had in his “prime.”  Since losing twice Cotto has dedicated himself more to using his boxing skills and movement, and has avoided getting into the kind of wars that lead to him being so badly damaged in the past.

At the end of the day, though, that argument really is more about making a case that Cotto wouldn’t have had a chance in 2007 than saying he does have a chance now.  A younger Cotto likely would have been too aggressive, an open book for Mayweather’s counter punching, while the more experienced Cotto will probably try to stick and move more, leading to a slow death instead of a quick knockout.  While Mayweather likely would have dominated even an undefeated Cotto, that fight at the very least would have had more potential for action and the hype that always comes from seeing two unbeaten boxers face each other.

So why be excited about this fight?  Well there are a few decent reasons.  For starters, as mentioned above, these are two of the best fighters of this generation.  Anytime you have a chance to see two great boxers in the ring together it is a good idea to take it.  Secondly, the bout taking place at the 154 pound limit would seem to give Cotto some advantage.  He has fought at jr. middleweight three times now and looked very comfortable, while Mayweather’s only previous fight above 147 pounds was a relatively ordinary performance in a split-decision win over Oscar De La Hoya.  While it isn’t unreasonable to assume that Mayweather will be better adjusted to fighting at the higher weight on his second try, there are at least some question marks about how comfortable he will be.

Finally, the fight will be a major event.  Cotto is one of the few active fighters (outside of Mayweather and Pacquiao) that interests casual sports fans, which is certainly the main reason Floyd chose to fight him.  The fight will make a lot of money and get plenty of hype from the mainstream media, which is never a bad thing for the sport.

Considering that a month ago it looked like Floyd would be in jail this spring and not fighting at all, it is hard to get too upset about hearing he’s going to be sharing the ring with a fellow superstar in what will be a big event for the boxing world.  While it might not be wise to get expectations too high concerning the bout, it is at the very least better than nothing.