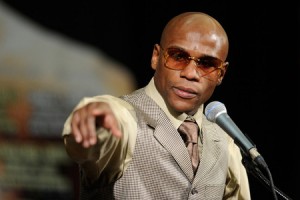 WBC welterweight champion, Floyd Mayweather Jr., has selected WBA jr. middleweight champion Miguel Cotto as his opponent for May 5 at the MGM Grand Casino in Las Vegas, Nevada. Mayweather made the announcement at his licensing hearing earlier today.

Cotto, who became a promotional free agent on December 31, had entered into negotiations with WBO welterweight titlist, Manny Pacquiao, but could not get Pacquiao to agree to a 150-pound catch-weight. Cotto was unwilling to come down to 147 to make the bout. Mayweather, who fought Oscar De La Hoya at the full jr. middleweight limit of 154 pounds in 2007, is willing to face Cotto at the 154-pound jr. middleweight limit.

Mayweather was required to appear before the Nevada State Athletic Comission to apply for his license and to explain his plea deal stemming from various charges dating back to 2010. After revealing Cotto as his May 5 opponent and giving his side of the story, the comission granted Mayweather a one-fight conditional license. He will reportedly have to re-appear on May 1.