Story and Photos by Gary Purfield

According to Billy Briscoe, who currently trains Gabriel Rosado and Victor Vasquez among other Philadelphia fighters out of the Rivera Rec Center in North Philadelphia, you don’t change a fighter’s style, you work with what you’ve got.  But along those lines you help that fighter be a smarter fighter based on their style.

So when he began training the crowd-pleasing pressure fighter Victor Vasquez last year, Briscoe didn’t try and make him something he is not.  He took the aggressive pressure fighter and began looking to make improvements that would make Victor better at doing what he likes to do.  And what Victor likes to do is put on a fight the fans will love, by attacking his opponent with relentless aggression. 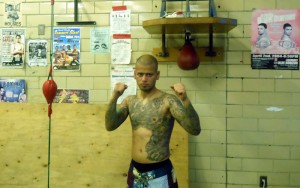 Briscoe knew that he would not have to search for Victor’s “ring identity” but simply improve what was there.

Victor Vasquez got a late start in the boxing game.  The North Philly lightweight boxed in his teens but didn’t really get serious until later when he turned pro in his mid-twenties.  Without the benefit of an amateur background it has been on-the-job-learning in the pro-ranks for Vasquez.

He lost his undefeated mark in his third pro fight.  He won his next five but then was stopped by Ryan Belasco in a matchup of young fighters.  Since then he has gone 7-3-1 always fighting in the local Philadelphia area with several bouts at the now closed famous Blue Horizon.

Along the way, through his ups and downs, Vasquez improved his skills and ring IQ.  But along the way, win or lose, one thing was consistent with Vasquez.  His fights pleased the fans in attendance.  It became a regular quote amongst local boxing writers when they were asked about Victor, “he is never in a bad fight.”

It really didn’t matter if he won or lost.  His style of aggressively coming forward to force his opponent into a back and forth fight that usually turned into a brawl would have the crowds cheering and walking away knowing they wanted to see Vasquez fight again.  Local promoters and managers began realizing if you want to sell tickets in the Philly fight scene, get Victor Vasquez on the card.

“I think people want to see people fight, not run.  So you choosing this sport to get in there and fight.  Not to pop shot and just run.  So, I guess that’s what they like.”

Once the Blue Horizon was no longer the spot for Philly Boxing, he went on at several shows at the Arena in South Philly continuing to draw a crowd.  Then local promoters Joey Eye Boxing, who Vasquez recently signed with, began having Victor headlining at the new Harrah’s casino in Chester, right outside of Philly, and he packed the fans into the ballroom.

“Ya, I love the support.  Whether you don’t like me, or you do, sooner or later you’re gonna end up liking me because you’re there.”

But after a loss to Osnel Charles three fights back, a fight which Vasquez feels he did not lose, he began working with Briscoe.  Slowly but surely he has added wrinkles, improving his offense and especially his defense while maintaining his all-action style.

Suddenly Vasquez was becoming simply more than just an exciting local pressure fighter.  He was becoming a talented and tough boxer that could effectively brawl to get the win and please the crowd.  Vasquez spoke about the improvements since joining with Billy Briscoe.

And trainer concurs with the fighter’s improvements. 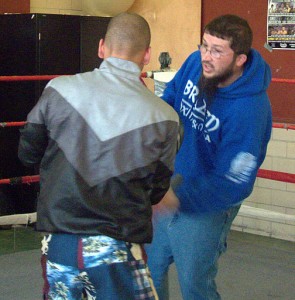 “Head movement obviously, angles.  His punch output, his conditioning, and his boxing IQ.  You know what I mean, he’s not a dumb guy.  You always gotta add because there’s a difference between training and continual education.  Most fighters just train, we continually educate.  We always gotta find something different.  Fighter is only as strong as his weakest link.  I know I use a lot of clichés but you got to train the fighters to his weakest link.  You know his jab was always good but his head would stand and he would wait for the receipt.  Now we got him jabbing, moving his head, moving his hands, stepping around, feet start moving.”

In his first fight with Briscoe, Vasquez disposed of local fighter Gustavo Dailey with a brutally effective fourth round knockout.  It was his usual entertainment, mixed with a systematic approach that broke down his opponent with body shots, that eventually worked their way upstairs for an impressive one punch knockout that had Dailey reeling all over the ring.

In his next fight he took on former highly touted prospect Angel Rios from New York who was 9-5 at the time.  Vasquez took the early rounds with Briscoe’s style of smart pressure fighting and then kept pace while weathering a late storm from the rugged Rios to take home a majority decision victory.

This weekend Vasquez finds himself taking on his toughest test yet in veteran Dorin Spivey 40-6 (29 KO).  Vasquez is used to headlining the card, as he will do again this weekend, but he will be fighting for the first time in Atlantic City at the Tropicana Hotel and Casino.  He will also be fighting in his first ten rounder and for his first minor belt, the vacant NABA lightweight title.

Vasquez is certainly looking forward to the chance to bring home his first piece of hardware.

“I’m excited; I’m more excited and anxious for this fight than nervous.  Every time you have butterflies but being in that type of position in the tough road I had, I’m excited and I can’t wait.”

Vasquez knows he is in for a tough challenge against the battle tested Spivey and will need to employ all the lessons he has learned in the ring, what he has learned under Briscoe’s watchful eye, and be ready to adapt to a fighter that can attack or counterpunch.

“Billy teaches me to adapt to any style.  You go in there and whatever the fight calls for that’s just what it is.  We adjust as we go.  I lacked the experience in amateurs and I’m learning fight by fight.

“I don’t know much [about Spivey].  I seen him last fight in November.  He’s a vet, a veteran, I respect him, but when we get in there it’s a whole different level.  Respect him outside the ring; inside the ring let the best man win.

“Ya, ya, I have to be careful, he’s a veteran.  I go in there like I’m fighting a lion every fight.  I don’t take anybody lightly.  You can’t in this game because one punch can make you or break you, change your whole life.  So I’m going in there very cautious, very careful and ready to go.”

Vasquez did things somewhat backwards.  First he built the fan following, then he really began improving his craft.  Now the aggressive style in the ring and the hard work outside the ring is truly starting to pay off in the way of an opportunity.  A win this weekend nets him the NABA belt and a top fifteen ranking with the WBA in the lightweight division. 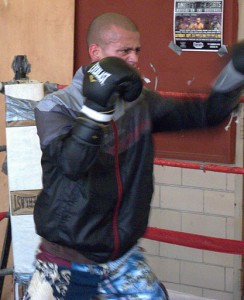 But you get the feeling that no matter how successful Vasquez is, he will not forget his roots.  He proudly resides and trains in his childhood neighborhood of North Philadelphia.  He continues to work as a barber, which is how he earned his nickname “The Brawling Barber,” cutting hair at Consider It Done in the neighborhood.  Vasquez also has three kids, a ten-year-old daughter, a five-year-old son, and a six-month-old boy.  Vasquez lights up talking about his kids and informed us that we visited on his twenty-ninth birthday which he plans on celebrating this weekend with another exciting win.

So once again he will headline what should be another intense and entertaining fight.  Once again he will enter the ring looking to put on a great show for the fans, but is also well aware of the implications of a victory and has plenty of goals for his future.

“I just can’t wait till the fourth, gonna be an exciting night.  They called me up, said get ready for the fight, that’s how I do it.

“One fight at a time of course.  My goals this year, end up with as many titles as I can.  Win the belts.  Like Billy likes to say, add to the trophy case.”