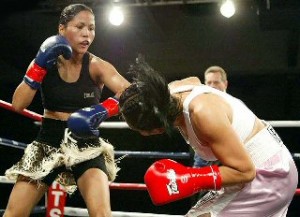 As the sun breaks the horizon in the East, “Joe and Jane Boxing Fan” reluctantly rise from their beds and shuffle around the kitchen in a subdued haze. When Joe and Jane finally leave for work in the morning, Kaliesha West might be gutting out the last few rounds of sparring for the day, only to head to her full time job as an Emergency Room Host at Loma Linda Hospital.

We tend to think of professional athletes as living in the lap of luxury, free to hone their craft at their leisure. The club fighters and hard-working journeymen that have to hold down a full-time job and train around their work schedule are afterthoughts lost in the shuffle. We only think about them when they step through the ropes and proceed to provide us with six, eight, or ten rounds of entertainment.

Kaliesha West (14-1-3, 4 KOs), aside from the obvious difference of gender, is different from the other professional boxers holding down a full-time job. Unlike many of her male counterparts who sacrifice to find time to train, she holds a world title. West has been the WBO female bantamweight champion since 2010. Unlike Nonito Donaire, who held the men’s version of the WBO bantamweight title from February until October of 2011, West isn’t headlining HBO broadcasts and enjoying the spotlight as one of the top 5 profiled fighters in the sport. She is one of the many female world champions who go unnoticed, the would-be heroes and role models to future athletes.

Trained and managed by her father, Juan West, a former professional boxer, Kaliesha West is blessed to have around-the-clock support in her corner.

“I train my daughter because I want to support her. Boxing is her chosen sport and it’s my duty to be there to train and support her along her journey along to what she’s trying to accomplish,” Juan West said.

As one can expect, lofty expectations have been placed upon Kaliesha. While injuries derailed Juan West’s professional boxing career, his passion and drive were passed along to Kaliesha, and he expects dedication to her craft.

“I’m an overachiever myself, so I have put it in her to be an overachiever. So get in the ring and give 110%. At the end of the day she can say ‘I did my best’.”

Kaliesha recognizes the challenges her father presents her with and is appreciative of his influence.

“I would say it’s been hard for the most part. Not only is it the pressure of my coach, but the pressure of my father, so there’s extra emotions involved. My dad, being someone that I look up to, his opinion matters to me,” West said during our recent conversation. “Everything he says really gets to me at the heart, which is good in the long run. I was always doing that little extra to do my best for him.”

In addition to preparing Kaliesha for battle in the ring, Juan West goes to battle for her outside of the ring. As her manager he has to work to secure fights on fight cards whenever and wherever he can. With the huge disparity in men’s fights to women’s fights on any given fight card, one can imagine this is no easy task.

“I’ve got a special product: a woman with amateur pedigree, the amateur background, the experience and the skills to showcase what the men are currently showcasing.”

As proud as one would expect a father/trainer/manager of a world champion to be, Juan West sees himself in his daughter.

“My opinion of myself as a fighter, I believed that I could have been a world champion. Unfortunately I had injuries that took me out of the game,” he exclaimed. “Then I was blessed with Kaliesha who had the same ingredients to accomplish the ultimate goal. I wasn’t able to accomplish my goals, but I was able to help my daughter accomplish her goals.”

Juan and Kaliesha set out to become a world champion, and together they achieved that goal in September of 2010, on the undercard of Shane Mosley’s fight with Sergio Mora. West grabbed the vacant WBO female bantamweight title with a commanding knockout win over Angel Gladney. When a male boxer wins a world championship, it opens doors to network deals and larger pay days. That wasn’t the case with Kaliesha West, and as she says, her journey became more difficult.

“It actually got harder because it costs money to be the champion. Just recently I signed with a promoter, so we were grateful to have my last title defense covered,” she said. “But before that I basically defended my title for free because the sanctioning fees were so expensive that the promoter couldn’t afford a purse for me.

“When I got the world title I was thinking it was going to change, and I would be breaking down walls for women, and that was one of the main reasons why I went after a title. I got to be at Staples Center on a Golden Boy card under Shane Mosley–what more can you expect?”

But things didn’t change. West, like other female boxers, can’t get on HBO, Showtime, or even ESPN. She understands the task at hand and knows success will only come through hard work and determination. With the 2012 London Olympics around the corner, Women’s Boxing is faced with just that golden opportunity. More importantly, Kaliesha West will be faced with a golden opportunity.

Women’s boxing will be contested at the 2012 Olympic Games in London. With a worldwide audience at the helm, its competitors will be on display for the world to see.

“What used to be displayed isn’t half as good as what can be displayed today because we’ve made big improvements,” West told me when asked about opportunities for television exposure for female athletes. “Back then when female boxing was on TV they weren’t even allowed to fight internationally and they were so limited. Women now have all this experience from an expanded amateur game.”

As an established world champion, widely regarded as one of the best in the sport, she has the opportunity to lead the group out of the shadows and into the light.

Change happens gradually and over time, and it is unlikely that we’ll see women on HBO, Showtime, or ESPN this year, or the next for that matter. Kaliesha West knows it is unlikely she’ll reach the celebrity status of a Laila Ali or a Christy Martin, but she is ready and willing to lead a strong group of boxers, who just happen to be female, onto the grand stage.

“I have probably another 5 years or so before I’m getting up there and start getting old. My career isn’t going to last forever, and neither is my name. So where’s the future?” she asked. “I’ll go and support a female boxer if I know her personally, if I know she’s got a big fight coming up. I’ll put up other female fighters out there. I’m not sitting here trying to blast my name.

“If I wanted to talk only about myself I could, but I’d be weak. I want to come as a group of strong females.”