Dee Lee Promotions hosted the “Super Brawl” Saturday night from the Tropicana Casino and Hotel in Atlantic City.  The title “Super Brawl” was not an overstatement, as the main event pitted all action and Philadelphia fan favorite, Victor Vasquez, against Virginia Beach’s veteran Dorin Spivey in a ten-round bout for the NABA lightweight title. 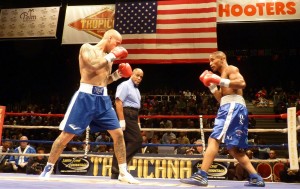 Putting these two in the ring together, with Vasquez’s aggression and Spivey’s willingness to mix it up, was as close as you get to guaranteed fan entertainment.  The nine-fight card had a large and rowdy crowd of more than four thousand looking to see the fighters deliver on the Super Brawl promise.  Overall the fans got what they came for with an exciting main event, two highlight reel knockouts, and several other action packed fights.

The main event did not disappoint as both men came to fight and provide action for the fans in attendance.  Vasquez came out strong in round one using his standard pressure attack to take the opening stanza.  In round two, Spivey began measuring his opponent to land his jab and right upstairs.  The veteran Spivey got very busy with his punches and was able to get the best out of each exchange.

The pattern continued throughout the fight.  As rounds went by, Spivey became more and more offensive.  For every punch Victor landed, Spivey landed three or four.  Vasquez attempted to push forward and establish some momentum with some solid overhand rights and a few hard left hooks, but Spivey took the shots well and was always able to quickly regain control each time with a high punch output and high connect rate.

In round three, a right hand from Spivey opened a cut over Vasquez’s left eye.  With blood flowing and Vasquez having to wipe it away, Spivey pushed harder.  Vasquez, being the warrior that has brought him such a large fan base, hardly backed down.  Round four turned into a brawl and began a furious pace that would continue for several rounds.

By round seven Spivey had a commanding lead on the cards and continued to pepper his opponent with jabs and straight rights.  Vasquez was leaning forward trying to avoid the veteran’s accurate punches but was still taking shots.  The slick Spivey would take a step forward and land on Vasquez as he backed away.  Then, abruptly in round seven, referee Lindsay Page felt Vasquez had absorbed enough shots and jumped in stopping the fight. At the time, Victor was pinned in the corner but still moving and punching.  The official ending was a TKO at twenty-five seconds of round seven. 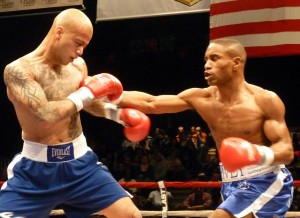 The stoppage felt premature from ringside.  Vasquez was certainly losing the fight and taking some punishment but he was still punching back and had plenty of fight left.  The crowd booed the stoppage with a passion and the only person more unhappy than those in attendance was the man who had been stopped.  Vasquez (14-6-1, 7 KOs) jumped forward and protested feeling he had been robbed of the chance for a come-from-behind win.  The fighting machine inside of Vasquez that makes him so popular was clearly unhappy; he believed he had plenty of fight left to continue and the ability to rally down the stretch.

Spivey (41-6, 30 KOs) takes home the NABA belt and a top fifteen ranking in the WBA.  It was an impressive performance as the veteran was able to use his experience to gain the upper hand on a more aggressive but younger opponent.  He talked afterwards about how tough an opponent Vasquez proved to be, stating he knows anytime you fight someone from Philadelphia they are going to be a tough out.  Spivey stated that it was his ability to get stronger as the fight goes on and his conditioning that allowed him to wear down his opponent and force the stoppage.

In the ten-round heavyweight co-feature “The Gentleman,” Chazz Witherspoon, squared off with late replacement David Saulsberry of Greenville, KY, who filled in for Evans Quinn when he dropped out this week.  Witherspoon, a Philadelphia native and graduate of Saint Joseph’s University was looking to continue building his way back up after losing to Chris Arreola in 2008 and to Tony Thompson in 2009.  Since the Thompson fight, Witherspoon has won three in a row. 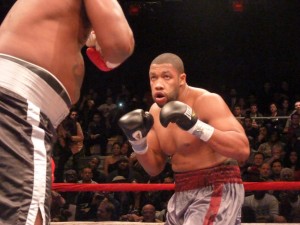 The SJU grad had plenty of fan support on hand and did not disappoint after a slow start.  In round one Saulsberry came out looking to disappoint the crowd by pulling the upset.  He pursued Witherspoon hard and landed several good shots while Chazz seemed content to move around the ring to feel out his opponent in the opening stanza.

Then Witherspoon changed things in dramatic fashion in round two.  Backing his opponent to the ropes, Witherspoon slipped under his opponent’s right hand to throw a monster overhand right of his own that landed perfectly flush on Saulsberry’s chin.  Saulsberry (7-5, 7 KOs) crumbled to the canvas and was counted out at thirty-two seconds of round two.  The count was hardly necessary as it was clear that he was not going to get up if he has been given a minute instead of ten seconds.

The large crowd on hand at the Tropicana, many of them there for Witherspoon, erupted in the moment.  Witherspoon (30-2, 22 KOs) was pleased with his performance after being patient against the bigger man in round one.

“I wanted to feel him, the guy was really strong.  He had me by sixty pounds and I don’t want to run out there and start trading blows with someone who has sixty pounds on me.  That’s what he wants me to do.  I had really good conditioning so I wanted to let that show itself.  Anybody off the street can just run out and throw punches.  I just wanted to let that first round go by, settle down.  I saw I could set him up for that shot, I was about to throw it in the first round but I figured I’d wait and throw it in the second round.  I wanted him to think I was running from him actually and he ran right into it.”

Now Witherspoon is looking to chase bigger game and get himself back to the top.

Female fighters Nydia Feliciano and Ela Nunez put on what might have been the most action-packed battle of the night in a four-round, jr. featherweight bout.  While the action was good, Feliciano who fights out of the Bronx, was the more skilled fighter and took the unanimous decision by scores of 39-37 on all three cards.  Nunez (11-12-2, 3 KOs) showed toughness hanging in and continuing the fight but was not able to keep up with movement and accuracy of her opponent.  Feliciano baffled her opponent with slick movement of her head and upper body while coming around each time to deliver hard shots to the head and body.

Undefeated prospect Dennis Hasson made a long awaited return to the ring after seventeen months out of action with management issues.  Hasson normally fights at super middleweight, but after the layoff is easing back down in weight, fighting tonight at 192 lbs against William Santiago out of Trenton, NJ by way of Puerto Rico.

Hasson, who fights out of Wilmington, DE, looked rusty in the first round as he was pursued by the naturally bigger Santiago who was able to catch Hasson with a few solid shots to take the first round.  Then, in round two, Hasson settled back in, started boxing his fight, and quickly got results.  Hasson landed a hard right to the body dropping his opponent’s gloves and then a perfect right to the head that stunned Santiago.  From that point it was all Hasson.  He landed good right hands and left hooks and it appeared the fight was close to being stopped when the bell rang.

“To be totally honest with you, I’m a super middleweight but I’ve been off for seventeen months with a lot of problems trying to get my life together.  I had to take a fight at a higher weight class.  So the first round, I’m not going to lie, I was a little nervous.  The guy was really husky.  I was a little cautious the first round but then my coach Dave Tiberi told me to settle down and use the jab.  So once I started doing that it started opening up.  Boxing broke him down.”

Hasson wasted no time going after his wounded foe in round three.  More rights and left hooks were landed to the dazed Santiago who stumbled around the ring.  Hasson pinned him to the corner and after several more shots referee Allen Huggins had seen enough, calling a halt at 1:31 of round three.  Hasson stays unbeaten at 12-0, with 4 KOs and was able to shake off the rust from his extended stay out of action, while Santiago falls to 6-8-1 with 2 KOs.

“He was going on his heels because I was double-jabbing him so that when I knew I could start opening up with the big right hands.  I didn’t want to throw nothing crazy in the first round and get caught.  And I tried it and I did, I got caught.  He started throwing big wild shots at me and I was just trying to weather the storm.  Double jab and relaxing just broke him down.”

Frankie Filipone (9-2, 2 KOs) of Norfolk, VA won a unanimous decision over Harley Kilfian (9-9, 8 KOs) of Menomonie, WI in a six-round light heavyweight bout.  Not much else to say as not much happened in this one.

Joey Tiberi, who always brings a large cheering section from his home in Newark, DE, sent his fans home happy with a unanimous decision win in a four-round lightweight bout.  Tiberi (7-1, 5 KOs) won by scores of 40-36 on all three cards to knock off Steve Cox (2-4, 1 KOs), who came down to AC from Wisconsin.  Tiberi landed some big shots in the first two rounds, including some heavy body shots.  Tiberi had Cox hurt in round two but was unable to finish the job.  Tiberi seemed winded from his efforts in the final two rounds but still did enough to sweep them on the cards.

Jon Bolden of Brooklyn, NY and Dorsett Barnwell engaged in a slow-paced heavyweight bout over four rounds.  Bolden was content to jab and move while Barnwell followed his opponent, trying to land one big right that never came.  Barnwell was awarded the unanimous decision by scores of 39-37 on all three cards.  Most on press row had it a draw 38-38 including this writer.

Isaiah Seldon, son of former Heavyweight Champion Bruce Seldon, scored a devastating second-round knockout at 1:41 of round two over Kenneth Moody Jr. (2-3, 1 KOs).  The Atlantic City middleweight, Seldon, won the first round and then landed a bomb of a right hand knocking his opponent to the canvas.  The fight was waived off by referee Allen Huggins without a count as Moody was clearly out and done.  Seldon (6-0, 3 KOs) was joined by his father, the former champ, who was in attendance.

In the opening bout of the evening Keenan “Killer Keenan” Smith of Philadelphia remained undefeated with a majority decision win over Chris Finley of Detroit, MI.   Lightweights Smith (5-0, 1 KOs) and Finley (3-4, 3 KOs) put on an action-packed start to the night, but Smith’s skills were simply too much as the southpaw repeatedly landed the straight left to stagger his opponent.  Smith also showed an ability to fight through adversity when he was cut badly underneath the right eye in the fourth and final round.  It was ruled from a punch but appeared to be from a head-butt.  Smith won by scores of 39-37, 38-38, 39-37.

For more pictures from the action in AC visit the following link.