Gods bless Joe DeGuardia. In a boxing world where fights are canceled on a moment’s notice, where you can’t count on a boxing match actually happening until the bell rings to start Round One, ESPN2 is putting a show on this week. Demetrius Andrade is fighting…someone. With all the changes that have happened this week I’m past the point where I’m even going to commit to naming his opponent. First it was Derek Ennis, then it was Terrance Cauthen, now it’s Angel Hernandez, tomorrow when the TV broadcast starts it could be the promoter setting a scale up at the front gate and first guy to step on it weighing three pounds either side of 154 gets to step into the ring. All of this happened in sight of solely the sorts of people who regularly follow and/or write boxing news. Joe Sixpack will turn on his TV, his wife will bring him a beer, punches will be exchanged (between the fighters on TV, not Joe and Mrs. Sixpack), and if the fight’s any good he’ll get his entertainment for the night.

Meanwhile, Andrade himself has been waiting to find out who the lucky guy is who will be trying to decapitate him on 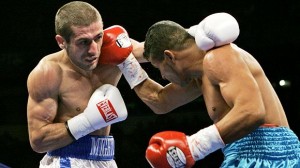 Friday night. He’s been training to fight Derek Ennis, who is a certain type of fighter. Anything he picked up in sparring, assuming he had a good sparring partner who mimicked Ennis’ style, goes out the window. His corner people get a couple of days max to figure out a strategy so they can effectively guide their charge between rounds (and the days of Demetrius having his father in there to tell him he’s the best are long in the past). Yet, for all that, Demetrius Andrade is still heavily favored to win a fight in his backyard purely by virtue of the fact that he knew when he was fighting and had a full and proper training camp while his opponent got a call, grabbed the nearest pair of gloves and his lunch pail, and got to work.

It’s inspiring stuff, really. Every time a fighter takes a fight on short notice, we forget that he’s a guy who, instead of having the gilded path of fame that a select few boxers reach in life–the kind of fame that allows them to move even the criminal justice system to their whim (or their promoter’s whim) in order to grab a big payday before paying a debt to society, is just trying to make a small semblance of a living risking his long-term health by having someone try to hit him so hard that he ends up thinking he’s Batman as the referee shouts some strange alien language over him as his brain tries to adjust to where the hell it actually is with a ten-second deadline to do so.

In the space of an entire lifetime, nine years is not a world-spanning time frame. But for Angel Hernandez, nine years may as well be an eternity. He stood on the cusp of summiting the sport’s biggest obstacle; he was in against Winky Wright for the IBF’s version of the exalted title “junior middleweight champion of the world.” Wright beat him easily. In what was supposed to be a right-the-ship fight that would propel Hernandez to another title shot, Raymond Joval got him on a technical decision, Hernandez’s face cut like a slasher-film victim from an accidental headbutt. Hernandez’s career as a serious title contender was over.

Yet here he is, in 2012, with three consecutive losses, disqualified in his last fight and knocked out by journeyman Peter Manfredo Jr. three fights ago, his arm not raised in triumph since beating a completely washed-up Antwun Echols in 2009 (Echols’ sad, pathetic story, 1-12-3 in his last 16 fights dating back to 2005 and a knockout victim in “why does this guy even have a license?” fashion in his last three, is another story for another time). We can hope that Hernandez has something left, and if he doesn’t, that Andrade beats him convincingly enough to prevail upon him the need to retire. But the guy’s a regular Joe who happens to have some talent in his fists, and all praise be to him for getting his money.

Speaking of palookas, who want dearly to recapture old glories, Mighty Mike Arnaoutis is on the off-air undercard, in a six-rounder against a guy bringing an 11-16-3 record into the fight. For Arnaoutis, it is his first fight since Danny Garcia (18-0 at the time) presumably ended his career with a complete smackdown in four rounds back in October of 2010, and Arnaoutis has five losses in his last six fights, the sole victory coming over Doel Carrasquillo. The first fight of that six-fight string was a two-round, one-sided slaughter at the hands of Victor Ortiz in 2009, which makes one wonder at whether that was an “and he was never the same” moment in true textbook fashion.

Yet here the Greek is, fighting again, his passion for sporting competition under bright lights perhaps greater than his common sense and sense of self-preservation. Off-air, under the eyes of the kinds of people who could get him back on television, fighting for a few hundred, maybe a couple thousand dollars max, Mike Arnaoutis decided he will not go gently into that long dark night but rather rage against the dying of the light. Once upon a time he fought for a world title (losing to Ricardo Torres for the WBO junior welterweight strap in what was Arnaoutis’ first loss as a pro in 2006). Now he fights a nobody with only a smattering of a live audience and nobody on television to see him.

Julio Cesar Chavez Jr. can keep his piss in his bladder and out of the drug testing cups all he likes. Manny Pacquiao can duck Floyd Mayweather and Bob Arum can lie to us every day and twice on Sunday. Nonito Donaire can run scared from Guillermo Rigondeaux while thumping his own chest about how great he is. Andre Ward can duck Lucian Bute and boxing scribes can gnash their teeth about how the sport is dying because nobody is making great fights. The rest of us who know better will continue to watch inspiring stories about tough guys and continue to say “get two evenly matched dudes in there, hold the fight in a parking lot in the middle of nowhere, and we’ll find a way to watch.”

Shine on, palookas and journeymen and wandering souls; you are the true greatness of the most pure, visceral sporting competition on the gods’ green Earth.

Fox Doucette covers Friday Night Fights for The Boxing Tribune. His weekly column, The Southpaw, appears on Thursdays. He’ll take the ESPN guys over the PPV guys every week. Fan mail, hate mail, and your favorite stories of journeyman fighters can be sent to beatcap@gmail.com.