Lightweight Mike Dallas Jr. (17-2-1, 7 KOs) puts his very livelihood as a fighter on the line on ESPN2’s Friday Night Fights this week as he takes on rising prospect Miguel Gonzalez (20-2, 15 KOs) in the main event. In the co-feature, brain-bashing super middleweight Shawn Estrada (13-0, 12 KOs) gets fed another Christian to his lion in the gladiatorial arena, this time in the person of Terrance Woods (9-3, 6 KOs). 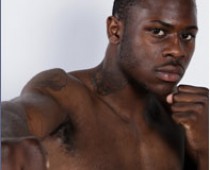 wrong when he steps up. Other times, a fighter looks like he’s on the bullet train to Palookaville before he inexplicably gets it together and starts winning fights as he moves along in his career. These two paths collide in a fight that may very well be a train wreck for Mike Dallas, who has stepped up the level of competition in each of his last two fights and fallen in defeat both times. Miguel Gonzalez, after a very pedestrian 6-2 start to his career, has won 14 in a row, the level of difficulty increasing each time out.

Mike Dallas Jr.’s trials and tribulations in an unfortunate 2011 are well known to fans of ESPN’s weekly series; both losses came on FNF. The Bakersfield, California native took an unbeaten record into battle against Josesito Lopez in January of last year and got smacked around like a mouse fighting a cat en route to a seventh-round KO loss. Five months later, his would-be comeback fight against Mauricio Herrera went about as well for Dallas as any other decision goes for one of Herrera’s opponents (Ruslan Provodnikov comes to mind), as a truly preposterous set of scorecards gave the decision win to the Mexican and a distraught look to the face of Dallas. After the fight, when interviewed, Mike Dallas Jr. was fighting back tears as he said “this just isn’t fun anymore,” and Teddy Atlas backed him up on the broadcast while simultaneously excoriating the judges in that fight.

A loss like that can have a real effect psychologically. Will Dallas come out looking for the kill, and if so, will Gonzalez be able to add another notch to the hilt of his sword, another name to his Book of the Dead of fallen foes? Miguel Gonzalez has exactly three wins in his career over fighters with better than .600 records: Jon Swain (3-0 at the time of the fight) in 2009 in what was Gonzalez’s fifth pro fight, and in his last two against Tyrone Harris (24-7 and knocked out in three of his last four before going the distance with Gonzalez) and journeyman Humberto Toledo (who took a 39-6 mark into that fight).

Level of opposition favors Dallas; natural talent favors Dallas. But Mike Dallas Jr. may very well be a shadow of himself psychologically after being physically broken and emotionally broken in consecutive fights last year. A fighter desperately fighting for continued relevance and a fighter trying to show the world that he is a legitimate prospect should make for a spirited, at-times brutal contest.

Meanwhile, fans are advised not to get up for a beer during the co-feature lest they miss a knockout. Shawn Estrada hits like a car, and against the weak competition he has been in with to date, he has shown signs that his power is indeed legitimate; he is either a young Lucian Bute or a young David Lemieux, a question that will not be answered this week. The only fighter to go the distance with Estrada, Tony Hirsch, was dropped in the first round of their six-round contest and spent the rest of the fight doing more to survive than to try and win. Estrada has ten first-round knockouts among his twelve victims, all of whom inhabit the same plane of mediocrity in which the opponent he is in with this week dwells. One need not be Karnak the Magnificent to see how this will go.

For his part, Terrance Woods has only been stopped once, but there is a big difference between surviving a four- or six-rounder and going the distance with a big-time knockout puncher for eight rounds. Woods has fought two undefeated prospects with similar records to Estrada (both guys were 14-0 to Estrada’s 13-0). The first guy, Sergey Kovalev, stopped Woods in three rounds for what was at the time Kovalev’s 13th knockout in 15 pro fights. The second guy, Alexander Brand, saw Woods become only the second man to take him the distance as Woods’ attempts at survival led to a six-round unanimous decision for Brand by wide margins on all three judges’ cards. Alexander Brand is more of a late-round knockout type; Estrada is more like Kovalev, the type to end fights quickly against sacrificial lambs.

Friday Night Fights airs on ESPN2 and ESPN3.com at 9 PM Eastern/6 PM Pacific on Friday, February 17th, from College Park Center in Arlington, Texas under the watchful eye of the Texas commission (read our Fearless Leader’s Monday rant here on the Tribune, if you haven’t already, for a scathing indictment of the Lone Star State). The Boxing Tribune will have a full recap of the night’s televised action, including any (very likely) swing fights, shortly after the conclusion of the program.

Fox Doucette covers Friday Night Fights for The Boxing Tribune. His weekly column, The Southpaw, appears on Thursdays. Fan mail, hate mail, and speculation as to whether Shawn Estrada is David Lemieux or Lucian Bute can be sent to beatcap@gmail.com.