Having the hometown crowd behind him wasn’t quite enough for Texan Eric Molina (18-2, 14 KOs) as Chris Arreola blasted him out in the first round of their heavyweight contest in Corpus Christi, Texas.  The fight was televised live on 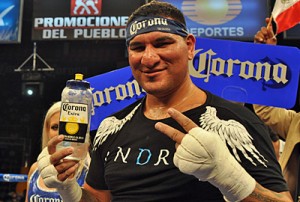 Molina came out ready and willing to engage Arreola, even going so far as to daze the former title contender early in the first.

“I said before the fight, if I had him hurt I’d try to come in a finish and I did,” said Molina in his corner after the fight.  “He was holding on for dear life, and he caught me.”

Arreola used a sharp left hook to stun him on the ropes and then a devastating right cross to finish him off.  Molina was counted out by the referee at 2:30 of round number one.

With the win, Arreola improved to 34-2.  He has won seven fights in a row since his close MD loss to Tomasz Adamek in 2010.  More importantly, he has consistently stayed in shape, weighing no more than 245 lbs in his last five bouts while staying extremely active, albeit against limited opposition.

The focused has paid off for Arreola, who expressed hope to do bigger and better things soon.

“I’m willing to do whatever it takes to become the first Mexican heavyweight world champion.”