There may not be any label in sports that stings quite like “waste of talent.”  Young athletes that don’t live up to massive expectations are generally among the most loathed and derided by sports fans.  It’s almost as if we take their failures personally; their lack of success treated like a betrayal of those who believed in them.

NBA fans love to hate the guys that found themselves littered along the side of the road in the “next Jordan” era.  Jerry Stackhouse and Vince Carter may have ended up pretty good basketball players, but they weren’t as good as we wanted 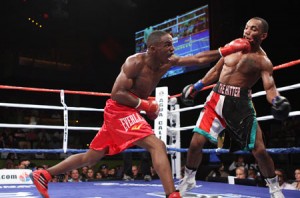 them to be, and for that we cannot forgive them.

St Louis’ Devon Alexander, despite being by all accounts a good young fighter, is walking this sort of line with boxing fans.  A couple years back, given the stamp of approval by the Mayweather family as the next big thing in the sport, Alexander seemed on the fast track to super stardom.  His talent and the kind of hard luck upbringing story, that boxing writers love, combined to create a massive groundswell of hype around his early career.

Now, after three mediocre performances in a row (a loss and two close decision victories) Alexander (22-1-0, 13 KOs) is scrambling in the middle of the pack with about a dozen other contenders in or around the welterweight division.  Already written off by many as a disappointment, it’s hard to guess what to expect when he takes on hard-punching Marcos Maidana this Saturday on HBO.

Before one tries to sort out what to make of this match-up though, maybe it’s best to consider who Alexander is in and of himself.  First off, he is not the once in a generation talent some of us thought he was years ago.  He’s very likely not ever going to be a top pound-for-pound type fighter.  Instead of directing criticism his way though, maybe we just need to accept that a lot of us put expectations on him that quite simply weren’t realistic.  Perhaps with our ever pressing desire to find the next big thing, we simply tried to turn Alexander to something he wasn’t.

What Alexander is however, is still not too bad.  He’s certainly a pretty good boxer.  He is willing to challenge himself against tough opposition, which is something that a lot of fight fans will tell you is sorely lacking in many young so-called stars.  Also when given the proper opponent, he can make a pretty good fight.

Maidana (31-2-0, 28 KOs) would seem to be that kind of opponent.  The rugged Argentinian is a no-holds-barred type brawler who creates an interesting style match up with the quicker Alexander.  Expect a pretty close fight on Saturday with plenty of fireworks.  If Alexander can keep giving us those, win or lose, he’s still a guy worth keeping an eye on.