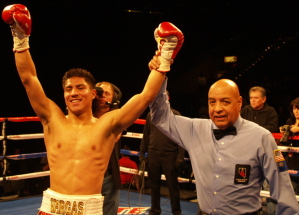 The ten-round contest played out exactly as most would imagine with Vargas piling up points round after round against the tough, but ultimately over-matched 36-year-old Tyner.

The only drama served up in this bout was a back and forth exchange of low blows that went on over several rounds and almost resulted in a point deduction for both fighters.

The Boxing Tribune also scored the bout 99-91 for Vargas.

After cruising through eight relatively one-sided rounds, the southpaw, Latimore was buzzed by an overhand right from the heavy-handed Nuñez. A few punches later Latimore would go down following referee Joe Cortez’s decision to break the fighters.

In the tenth, with Latimore in full retreat mode, a headbutt from a hard-charging Nuñez would send Latimore to the canvas again where Cortez would score it a knockdown and cost the Las Vegas resident another point.

The Boxing Tribune scored the bout 95-93 for Latimore.