What is it about this sport that everything is wrong or at its best, ass backwards?  No, I am not talking about too many weight classes, too many belts, greedy promoters, corrupt sanctioning bodies, or the myriad of other issues about the sport of boxing.  While many an article can be devoted to all of the aforementioned topics, that is not the focus of this frustration.  Today the focus is on the life and oddities of the modern boxing journalist. 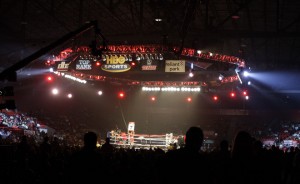 If he or she can even be called a journalist.  With so many random writers and bloggers speaking from their couch, is it even journalism?  Or is it a corrupt sport being covered from couches and armchairs of those watching HBO, Showtime, ESPN 2, and PPV?  Well, again, this is a topic for another day.

So as I ramble in the likes of other late-night, half-crazed writers of the past, I get to the point, eventually, of why I opened the laptop at a little before midnight with the wife half asleep giving me confused looks as to what prompted a sudden late night writing session.  Fact is, the urge to write has been gone for two weeks now, so a topic came, a moment of inspiration struck, and you take what you can get in dry times.

Today’s boxing writer.  In the past, the “glory days of the sport,” the boxing beat man was in high regards amongst, or even above, those covering the other major sports.  But today a different life awaits those who cover the sweet science.  Other than a very select few boxing journalists who do this full time, this is a side project for the majority of us (and I will continue to use the word journalism despite the fact that I believe many of those who cover boxing could not find the meaning of real journalism in the dictionary or even on dictionary.com because the word means something to me and fortunately is something that is practiced on the independent site you are reading).

The majority of us who cover the sport do so on our spare time.  We work full time jobs in any profession available.  Then, after a day’s work, instead of settling in at home, we charge to the computer to write our thoughts on a sport many have long since forgotten.  We  continue to care and believe that if this fight is made, or this promoter starts acting in a certain way, or this network starts broadcasting the sport, that everything will return to the days of boxing on prime time TV and the front of newspapers.  Oh, wait, nobody reads newspapers anymore.  Again, different rant for a different day.

Back to the topic.  We often use our valuable vacation or comp time to get off work so we can interview a fighter or catch a sparring session at the local gym.  We take our lunch break at odd hours to jump on a conference call for the next big fight that weekend.  We spend our weekends on press row at fights when we should be either spending time with family, friends, or just recharging for the coming week at our real job, the one that pays the bills.  We travel long distances on Saturday, cover a fight, and write all hours of the night to produce an article for the next morning.  Our reward: get a few hours a sleep, a few errands completed, and back to the grind Monday morning.  Oh, the other reward, angry looks, words, and stares from significant others, family, and friends who could never understand the feeling of duty that drives us to miss family events and other obligations to cover anything from a PPV to a club fight.

This is still not even speaking of the fun of actually covering the fight.  Catch the action as best you can and pump out some words as fast as you can.  Do I write a standard recap and get to bed, or do I go for broke and write a true rousing story that really describes the action witnessed a few hours before.  Because that is why we do this.  Despite all the reasons to walk way and focus on our real lives, we love this sport and the crazy fighters who do so much.

And for my part, I go for broke.  I believe the boxing fan deserves a quality, detailed, well thought out recap of a live card that can make the reader feel as if they were at the event and is long enough to be read through the morning coffee.  The time of including quotes from interviews and detailed explanations of the night is worth the time.  One fabulous perk of this thankless job is a free ringside seat.  In return I have an obligation to give the fan and reader more than a two to four paragraph recap of the obvious they saw on TV.

Yes, gone are the days of boxing writers employed full time for a big city paper.  They are lost along with the days when it was fashionable to wear a suit, top hat, and smoke a cigar while covering the fights.  Days I wish I belonged to at times.  But days I can’t have.  So I take what is left and enjoy it just the same.  Monday or Tuesday do an interview or visit a gym.  Wednesday write a draft.  Thursday fight writers block because your story needs to be in and run by Friday.

But while a poor picture is painted above, it is anything but sad.  I love what I do.  The enjoyment of speaking with a great fighter, or a prospect, or my personal favorite–one who is neither great or soon to be, but simply just a tough SOB that earns a living fighting his heart out for a paycheck, to thrill the fans, and maybe, just maybe, his shot at sniff of greatness.  That fighter that in many ways is like the writer.  Working a full time job while running in the AM, training in the PM, and fighting on the weekend.  Doing it not because it makes a living, because club fighting and internet writing a full time income does not generate, but because something inside him (or her, the ladies can fight as well) drives them to do so just as something is driving me to write this craziness after midnight.

For the joy of putting your thoughts and that fighter’s story on paper when you know you have a winner of an article.   Knowing that the words you are producing mean something to someone.  Telling a story that needs to be told.  Whether ten people or ten thousand read it, it had to be said.  And for one reason or another you were the one to say it.  Whether you are the one that drives the rant that aims to expose the corrupt in a corrupt sport, or the one to cover a glory division north of 200 lbs that may never be what it once was, or the guy who appreciates the beauty of an evenly matched fight on Friday night over a showcase on Saturday night, all boxing journalists have their passion and their reason for writing.

So we march on through our day jobs.  We call or take a day off when an opportunity for a story arises.  We suffer sleepless Friday and/or Saturday nights to cover live fights and write a story that would have made the suit wearing, top hat sporting, cigar smoking journalists of old proud while they read it with their morning paper and cup of coffee.