Last July, in Hamburg, Germany, Wladimir Klitschko (56-3, 49 KOs) was set to take on his biggest challenge.  It was the biggest fight the division had seen in the new millennium.  Former cruiserweight champion David Haye had goaded Klitschko into what was sure to be the most important fight in the younger brother’s career.  It would be his defining moment against what was sure to be his most formidable and dangerous opponent. 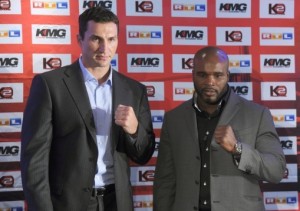 A rarity in modern times, the fight was being televised on HBO.  Really!  There was a certain kind of crispness in the air, something akin to electricity.  The fervor hearkened back to that found in the division circa the 1970s or the 1990s – heavyweight boxing’s glory days.

Fight fans had a skip in their step that day.  They were ready to witness the heavyweight event they had long missed since Tyson, Holyfield and Lewis ruled the division oh so long ago.  Older fight fans were hoping to relive the days of Ali, Frazier and Foreman.

It was time for something special – except that it wasn’t.

It’s become a familiar story over the last six years of Klitschko’s reign.  Brash talking challenger proves to be more bark than bite as he realizes in short order the puzzle the 6’6” Klitschko with the 81” reach presents.  Stay outside and Klitschko wins a jabbing contest.  Try to work in close enough to land punches and be left open to his exceptional power shots.

Most fighters prefer the former over the latter.  After all, it’s much easier to save face losing a decision rather than being left sprawled on the canvas unconscious.

Haye proved to be no different.  He kept so far out of the pocket that night the contest was reduced to a jabbing contest he was sure to lose.

By the end of the fight, Klitschko had earned a wide decision win over Haye but, as expected, the fight itself lacked all it promised.  Haye did not fight in a way that would lead anyone to believe he wanted to actually win the contest, and Wladimir Klitschko once again proved he requires a willing partner in order to be the entertaining champion heavyweight fight fans crave.

Sure, he’ll win the fight (he’s won 14 bouts in a row now), but fight fans want more than just that from the heavyweight champion of the world.  They want Riddick Bowe vs. Evander Holyfied.  They want Joe Frazier vs. Muhammad Ali.  They want center-of-the-ring fisticuffs and high drama.

Wladimir Klitschko hasn’t fought since then, but he’s scheduled to fight this Saturday against another former cruiserweight champion.  This time, it will be Jean-Marc Mormeck (36-4, 22 KOs) who, frankly, may have his best days long behind him.  This will be Mormeck’s first contest in over two years.  His last fight was a split decision win over heavyweight Timur Ibragimov.  Before that, he won his only other two bouts at the weight against fringe contender Fres Oquendo and journeyman Vinny Maddalone.  The Maddalone fight was his return to boxing after a two-year hiatus from a career-long run at light heavyweight and cruiser.

Make no mistake, though.  Unlike many fighters today, it’s not that Klitschko is avoiding the very best of his division.  Rather, it’s that he’s running out of legitimate opponents.  Other than his brother, a cursory glance at The Boxing Tribune’s heavyweight rankings will reveal a host of opponents that either have already been beaten or aren’t yet ready to take the plunge.

Mormeck isn’t David Haye.  In fact, he was actually kayoed by David Haye when the two fought in 2007 for Haye’s cruiserweight titles.  It most assuredly was not a jabbing contest that night.  Haye was down in the 4th but rallied to win by TKO in round 7 in exciting fashion.

But Mormeck came to fight that night.  He just didn’t win.

Maybe not being David Haye is a good thing.  Maybe Mormeck comes to fight Saturday night, too.   Wladimir Klitschko isn’t unbeatable, but he’s practically indestructible if you try to out-jab him, which is what most fighters end up doing once they realize the price one must pay to get past Klitschko’s long one-two combination.  In order to beat Wladimir, someone is going to have to brave the treacherous waters in close and force him to trade power shots.  Someone is going to have to get to his chin, and in the process, leave theirs exposed.

Will it be Mormeck?  Probably not, but that’s not necessarily what fight fans want or need at this point.  They need fireworks and drama.  And if not, they just need someone to try.

Prediction: Mormeck avoids pressing the action early but tries to in the middle rounds only to be knocked out in round number 8 for Wladimir Klitschko’s 57th career victory.   Fight fans don’t get vintage heavyweight boxing in all its glory, but don’t really feel cheated either.