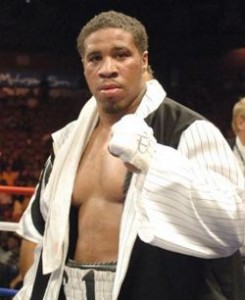 Estrada was a three-time U.S. Amateur Super Heavyweight Champion for the years of 2001, 2002 and 2003.  He was also a U.S. super heavyweight representative for the 2004 Olympic Games in Athens.  Since 2009, Estrada has gone 2-3 in his last five bouts.  In April of ’09, he recorded the second loss of his career with a UD 10 loss to Alexander Povetkin.  In February 2010, he fought Tomasz Adamek and scored another unanimous decision loss, this time in twelve rounds.  A year later, he fought Franklin Lawrence and lost by TKO in the tenth and final round.    Estrada is coming off unanimous decision win over Joseph Rabotte who was 11-18-1 at the time.

Although Alexander will be fighting in his opponent’s hometown, he’s two years younger (at age 29) and is three inches taller (at 6’4”).  While Estrada has fought five times since 2009, Alexander has been much more active, fighting twelve times.  In these twelve bouts, Alexander has gone 5-7 with all losses coming by TKO.  Notable opponents include Shannon Briggs (L TKO 1), Cedric Boswell (L TKO 2) and Deontay Wilder (L TKO 2).  Alexander is coming off a TKO 1 win over Clinton Boldridge who was 9-17-1 at the time.

Featured on the undercard will be Rich Gingras (10-2, 6 KOs), a star of season 4 of The Contender reality series, against veteran Adam Harris (10-4, 7 KOs) in a cruiserweight match-up.