Sergio Martinez has had anything but the typical path to the top of the boxing world, where he currently resides as the consensus middleweight champion of the world despite not possessing a single sanctioning body belt.  But now, at the age of thirty-eight, Martinez is trying to make the most of his time in the limelight of the sport before the inevitable effects of age force him to hang up his gloves.

Starting boxing at the age of twenty and turning pro at twenty-two, Martinez learned his craft on the job.  Beginning in Argentina and then going to Spain, Martinez got by on incredible physical talent while he learned the finer points of boxing.  Even now, when Martinez fights it is clear he is not a classical boxer.  The lightning fast southpaw who spent his early years cycling and playing soccer, often has his hands at his side, circles to his own left instead of the preferred going right for a southpaw, and jumps in and out hitting opponents without getting hit due to the pure physical advantages he has over virtually anyone at 160 lb. 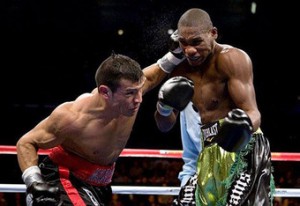 Despite a lack of experience, Martinez started out his career 16-0-1, facing lesser competition in his homeland of Argentina.  Then on February 19, 2000, he got his first opportunity for a big fight taking on the future welterweight champ Antonio Margarito, who was 20-3 at the time, in Las Vegas.  Margarito had far more experience against better competition and wore Martinez down to a seventh round stoppage handing him his first loss.

Martinez regrouped and won his next eight fights back home in Argentina.  But for Martinez, something was missing.  He had the belief that he could be a champion, and to build his skills and his name he chose to leave his homeland traveling to Spain in search of better opportunities.  It was there that he linked up with Gabriel Sarmiento, who still trains Martinez today and has received a great deal of credit for Sergio’s success.  Martinez would win his first four fights in Spain against poor opposition and then enter into a fight with Richard Williams on eight days’ notice in England, where he was considered an underdog.  Martinez beat Williams by decision and later, in a rematch, stopped him in seven rounds.

After several more fights against lesser opposition and a move from welterweight to junior middleweight, Martinez got his first big opportunity since the Margarito fight.  At the time of the Margarito fight, Martinez was not ready for that level of competition, but this time he was prepared for the challenge.  Martinez faced Alex Bunema in October of 2008 for the interim WBC 154 lb title in an HBO televised fight.  Martinez dominated Bunema in impressive fashion for an eighth round stoppage to announce himself onto the national scene.  His next fight, also on HBO, was against Kermit Cintron who was 30-2 at the time.  He seemed to have knocked Cintron out in the seventh round, but the referee ruled it a headbutt after counting Cintron out.  Then the fight was ruled a draw, despite most believing Martinez had clearly won a decision.

Win or draw, Martinez had begun making a name for himself.  When Kelly Pavlik dropped out of his fight with Paul Williams scheduled for December 5, 2009, it was Martinez who got the call to fill in against the man known as “The Punisher” on short notice.  Williams and Martinez provided what many would call “the fight of the year” in an incredible slugfest in the ballroom at the Boardwalk Hall in Atlantic City.  Each fighter scored knockdowns in round one to set the tone for what would become a vicious back and forth war that was fought at a high skill level with neither man willing to give in.  When all was said and done, Martinez was on the wrong end of a majority decision in a fight that could have gone either way, but went to Williams by respectable scores of 114-114, 115-113, and a ridiculous 119-110 from Pierre Benoist.

But once again, despite not winning on the cards, Martinez’s performance brought opportunity knocking.  Middleweight champion Kelly Pavlik was looking to rebound from his first loss to the ageless Bernard Hopkins.  Pavlik had gone north ten pounds to fight Hopkins and now was returning to continue his reign at 160 lb and lined up Martinez for April 17, 2010 at Boardwalk Hall.  This time Martinez would not be denied.

He started fast, dominating the first several rounds, befuddling the champion with his awkward style, speed, and movement.  Pavlik got into a groove in round five, scored a knockdown in round seven, and took the middle rounds.  But Martinez’s superior stamina and conditioning picked up late.  Martinez utterly dominated Pavlik rounds nine through twelve, opening cuts over both the champ’s eyes, landing at will, and even showboating with windmills that produced heavy straight left hand connects making his point that on this night he was the superior boxer.  Martinez walked away the consensus champ at 160 with the WBC, WBO, and Ring belts.

After the Pavlik fight, it was time to settle unfinished business with Paul Williams.  The rematch on November 20, 2010 was supposed to be another long war.  Instead Martinez, who by this point had physically grown into being a middleweight, landed a monster left hand in round two knocking Williams out cold and received knockout of the year.  Martinez had solidified his claim on the division, hit the number three spot on most P4P lists, and seemed to be an emerging star.

And certainly he had the qualifications to be a star.  Good looks, an exciting style that was producing more and more knockouts, and someone who acted as an upstanding gentleman outside the ring.  Martinez was gaining more and more notoriety for his work in the community including being a champion of rights for battered women and children who are victims of being bullied.  But his performances inside the ring may have been too good.  Martinez was far too dangerous and not popular enough to bring the top money fighters such as Mayweather or Pacquiao into the ring.

So he settled for what was left.  Martinez put on a clinic destroying Sergei Dzinziruk for an eighth round TKO.  In his last fight, Martinez looked somewhat human for the first time in a while but eventually did what he was supposed to do in stopping Darren Barker in eleven rounds.

But even with wins in the ring, Martinez lost his WBC and WBO titles to boxing politics.  The well-publicized move of the WBC taking his title and gifting it to Julio Cesar Chavez Jr. has been a sore spot for Martinez, who campaigned to get Chavez Jr. into the ring and eventually verbally blasted WBC President Jose Sulaiman for the Chavez fiasco and several other topics.

When Martinez, 48-2-2 (27 KOs), steps into the ring this Saturday for a St. Patty’s Day showdown in NYC with Ireland’s Mathew Macklin, he will do so with no official belts (although he has retained the Ring 160 lb title) but as the clear “Middleweight Champ.”  He is expected to beat Macklin but the tough Irishman should provide a stern test.  Macklin, 28-3 (19 KOs), is a full-size middleweight and will certainly come to fight.  But unless Martinez has lost a step to age, it is widely expected his speed and skill will be too much for the challenger and a largely Irish crowd will need more than the luck of the Irish to avoid going home empty handed.

The question for Martinez, assuming he beats Macklin, is where to go from there.  Martinez has all the intangibles to become a money-making star in the sport but is missing several outside factors to make this a reality.  A lack of depth in the current middleweight division has left Martinez without an opponent that brings the ability to test him and the name recognition to draw the interest of casual fans.

A showdown with Chavez Jr. would bring attention and crowds but not a true physical test as Martinez would likely dominate the young WBC belt holder.  Not to mention the obvious, that Chavez’s promoter seems perfectly fine with not bringing the money-making machine, Chavez Jr., anywhere near Martinez.  Fights with young guns like Dmitry Pirog, Gennady Golovkin, or Daniel Geale very well might bring a true physical test for Martinez but they don’t have the name recognition to excite anyone other than the hardcore fan.

With the clock ticking for Martinez in his late thirties, he has precious time to get the fights and exposure to cement himself in the history books.  If father time is good and he shares similar genes with Bernard Hopkins (because Martinez is known as being a 365-day-a-year gym rat and conditioning workhorse like Hopkins) he may have several more years to get fights that will allow him to make his mark on the fight game and go down as one of the great middleweights.

But if father time costs the athletic fighter just a bit of his natural gifts, it could spell a sudden end to his reign.  While Martinez shares Hopkins work ethic, he wins in a different fashion.  Hopkins, even in his prime relied more on boxing IQ than athletic ability, allowing him to fight into his forties despite losing a step athletically.  Martinez is a smart boxer but largely relies on freakish athletic talent.  If he loses a step it may spell his end, but for as long as he keeps his skills and talent he has all the makings of a fighter who can reign over the storied middleweight division and grow into one of boxing brighter stars.