With St. Patrick’s Day right around the corner, Irish boxing fans are out in support of Matthew Macklin, who will go into The Theater at Madison Square Garden to challenge lineal middleweight champion Sergio Martinez. New York has been called the Mecca of boxing, but with its rich history of Irish fights, it can also be called a Mecca, of sorts, for Irish boxing. 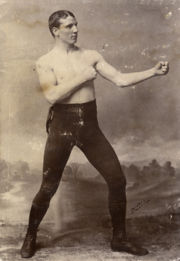 Now is a great time to take a look back at ten great Irish-born boxers throughout history, as ranked by your humble narrator. The following list contains fighters ranging from the days before video-recording to the modern era of YouTube, cable television, and the internet, and American-born Irish boxers were begrudgingly excluded from the list.

Several hours were spent researching the archives and records of some of the most respected historians of the sport, as well as more modern mediums such as YouTube, Boxrec, and in the case of a few, memory.  So without further ado…

Known as “The Napoleon of the Ring,” McAuliffe began his career in 1885 and quickly captured the American lightweight title in only his sixth fight. He captured his first world lightweight title in 1887 in his fourteenth fight, knocking out Harry Gilmore in 28 rounds of a fight that reportedly lasted one hour and fifty-one minutes. He defended or fought for the lightweight title six more times throughout an unbeaten career that lasted until 1897. Boxing historian Nat Fleischer ranked McAuliffe as the #5 greatest lightweight of all time, and he was inducted into the International Boxing Hall of Fame in 1995.

A Bronze Medalist at the 1956 Olympic Games, Caldwell turned pro in 1958. He won the BBBofC British flyweight title with a third round knockout of Frankie Jones in his eighteenth fight. He won his first world bantamweight title against Alphonse Halimi, the man who won the title from fellow Irishman Freddie Gilroy, in 1960. Caldwell defended the title against Halimi in a rematch before dropping it to Eder Jofre in 1962. Later that year, Caldwell lost a regional title bid against Olympic teammate and fellow Belfast native, Freddie Gilroy. Caldwell retired in 1965 after a points loss to Monty Laud.

Gilroy won a Gold Medal at the 1956 Olympic Games. He turned to the professional ranks in 1957, and over a short six-year career he would win the BBBofC, EBU, and Commonwealth bantamweight titles. Gilroy fell short in his only world title challenge – a fifteen round decision loss to Alphonse Halimi in 1960. Gilroy stopped Johnny Caldwell in his final fight to regain the BBBofC British and Commonwealth bantamweight titles.

McCullough was a two-time Olympian, competing for Ireland in the 1988 Olympic Games in Seoul, Korea, and in the 1992 Olympic Games in Barcelona, Spain. McCullough won a Silver Medal in 1992, losing in the finals to Cuban standout Joel Casamayor. McCullough added his Silver Medal to a Bronze Medal won at the 1990 World Cup in Bombay, India and a Gold Medal won at the 1990 Commonwealth Games. McCullough moved to Las Vegas to train with the legendary Eddie Futch and turned pro in 1993. The crowning achievement in McCullough’s career was his 1995 win over Yasuei Yakushiji in Japan; a win that earned him the WBC bantamweight title. McCullough made three successful defenses before losing to Daniel Zaragoza. McCullough made five more bids for world titles, but came up short against the likes of Prince Naseem Hamed, Erik Morales, Scott Harrison, and twice against Oscar Larios. McCullough is currently retired and working as a PR Rep for the UFC, but he maintains a comeback is still an option.

Video of McCullough vs. Erik Morales, part 1 of 6: YouTube playlist

Monaghan never fought outside of the United Kingdom in his 15-year career. He captured his first regional title – the BBBofC Northern Ireland flyweight title – in 1945, with a fourth round knockout over Bunty Doran. Monaghan captured the NBA flyweight title in 1947, with a decision victory over Dado Marino. With the sanctioning of the Commonwealth and BBBofC commissions, Monaghan capturedthe true world flyweight title with a seventh round knockout over Jackie Patterson in 1948. Monaghan  made one successful defense against Charlie Squire before going to London and losing his title to Terry Allen. Monaghan notched two wins to set up a rematch with Allen, but their fight ended in a draw. Monaghan retired shortly thereafter. Monaghan is up for induction into the International Boxing Hall of Fame in the 2011 voting class.

McGuigan represented Ireland in the 1980 Olympic Games in Moscow, and turned pro in 1981. His career got off to a rocky start when he lost his third fight to the brother of Chris Eubank, Peter Eubank. McGuigan avenged that loss three fights later and would go on to win the BBBofC British featherweight title in 1983 with a TKO2 win over Vernon Penprase.  He would knock out Valerio Nati to win the EBU featherweight title later that year. His 1985 win over Juan Laporte helped set up his first and only world title shot against Eusebio Pedroza, the WBA featherweight champion at the time. McGuigan made two successful title defenses against Bernard Taylor and Danilo Cabrera before losing his title to Steve Cruz in 1986. McGuigan fought four more times before retiring in 1989, and he was inducted into the International Boxing Hall of Fame in 2005.

Video of McGuigan vs. Pedroza, part 1 of 7: http://www.youtube.com/watch?v=p0ivo1kp3jQ

The short, stalky heavyweight bruiser from Dundalk ran away from the Emerald Isle as a teen, landing in New York in 1892. He joined the U.S. Navy and was eventually deployed to Hawaii. Sharkey’s (recorded) career began in Hawaii in 1893, and after three years he notched the first big win of his professional career – an eight-round points win over Joe Choynski in San Francisco. Sharkey would go on to record wins over “Gentleman” Jim Corbett, Kid McCoy, and a heavyweight title-winning disqualification win over Bob Fitzsimmons. Sharkey was elected into the International Boxing Hall of Fame in 2003.

A veteran of 65 recorded bouts and several unrecorded bare-knuckle boxing matches, the original Jack Dempsey was born John Edward Kelly (some sources report his birth name to have been Charlie Kelly). In his time he was equally skilled with either hand and moved with a surprising quickness. His talent earned him the nickname “The Nonpareil,” or without equal. Dempsey began his career as a lightweight in 1883. He beat Bill Dacey in 1884 to become the lightweight champion of New York, and in 1886 he knocked out George LaBlanche to win the American middleweight title. Dempsey won the world middleweight title in 1890 with a twenty-eighth-round TKO victory over Billy McCarthy. He lost the title to eventual heavyweight champion Bob Fitzsimmons on 1891. Dempsey’s career, and life, were cut short due to tuberculosis. His final professional fight came in 1895, when he was knocked out in three rounds by future Hall of Famer, Tommy Ryan.

Collins began his career in the United States in 1986, but spent the latter part of his career fighting in the U.K. After winning the WBO middleweight title in 1994, Collins moved up to the super middleweight division and ended Chris Eubank’s 4-year reign as WBO champion. Collins would beat Eubank in a rematch six months later and go on to add two wins over former multi-division champion, Nigel Benn, in 1996. Collins retired after injuries forced his withdrawal from a fight with Joe Calzaghe in 1997, and walked away from boxing for good when a health scare forced the cancellation of a comeback fight with Calzaghe in 1999.

Video of Collins vs. Eubank 1, part 1 of 5: http://www.youtube.com/watch?v=QpGRAa2tOHM

McLarnin began his career as a flyweight in 1923. He defeated the legendary Pancho Villa in 1925, but enjoyed little success until he rose to the lightweight ranks, earning his first world title bid to Sammy Mandel in 1928. McLarnin would go on to beat Mandell in two non-title bouts in 1928 and 1929. McLarnin had a huge following in New York. For his 1929 fight with Joe Glick, a reported 19,000 fans were in attendance. McLarnin won his first world title in 1933, knocking out Young Corbett III in only one round. McLarnin then played a back-and-forth game of tug of war with Barney Ross, dropping two of three against Ross. McLarnin, who hung up the gloves in 1936, was inducted into the International Boxing Hall of Fame in 1991.

**Records were sourced at Boxrec.com. Some biographical information was sourced at Irishboxers.ie and the International Boxing Hall of Fame**

You can email Tim and tell him his bias towards modern boxing and admiration of Nigel Benn has Steve Collins ranked far too high, at timharrison65@gmail.com, or follow him on Twitter at www.twitter.com/thetimharrison.