First, before I go any further, I have to acknowledge the fact that I “ripped off” the title of this week’s Rant from Fyodor Dostoevsky, the 19th Century Russian writer.

You see, whenever I use “Notes from the Underground,” some fake mean blogger who obsessively watches my every move goes into a tizzy and gets his man-tits all sore. Now, he can breathe easy and keep shoveling Cheetos into his walrus mouth while applying for membership into secret societies of crime fighting boxing scribes.

OK, now on to things that actually matter…

There’s nobody that brings out the cattiness in grown men like the undisputed, uncrowned middleweight champion of the world. 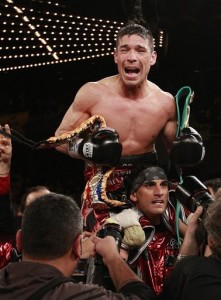 Some precede each Sergio Martinez fight with a complete depantsing of his upcoming opponent and then follow the fight with a detailed explanation of why what Martinez did was not impressive.

The other side obsesses on the man like a fawning teenage girl, already drawing cool crowns and manly images of battle on Photoshop mockups of his plaque for Canastota.

The truth of the matter is that Martinez is the best middleweight in the world, period. Unfortunately, that designation has definitely lost much of its prestige in this modern class of 160 lb fighters.

It’s not that a good, solid tournament couldn’t be squeezed out of Martinez, Felix Sturm, Julio Cesar Chavez Jr., and Dmitry Pirog. It’s just that nobody is in any hurry to fight one another. And with the top four middleweights spread out all over the globe, nobody is feeling any pressure to get in the ring.

So, Martinez, who has shown a willingness to fight some of the division’s best, is stuck fighting the best of the rest. Considering that most of the interesting competition in the division is already holding a belt and content on making bogus defenses against questionable characters, Martinez’s recent resume of Macklin, Barker, and Dzinziruk is not bad at all.

But, at this point, it’s a lot like the Andre Berto Syndrome. If you’re a critic, anything he does will be held under scrutiny, even if there’s nowhere else to go. Berto was crucified in the media for not fighting anyone of note, yet these same critics never chose to acknowledge the fact that there was nobody of note to fight.

It’s bad because it’s bad. That’s the depth of some of the stuff that passes for analysis.

Marvin Hagler, Where Art Thou?

Those who like to bring up the dearth of American talent in the heavyweight division should take a gander four divisions to the south.

Of The Boxing Tribune’s Top 20 middleweights in the world, only one was born in the United States (Peter Manfredo Jr.) and he’s already announced his retirement. The Boxrec list, which can be downright bizarre at times, only has three Americans in their Top 20–Peter Quillin, Paul Williams, and Sergio Mora (three fighters who have competed almost exclusively in divisions other than middleweight). Even the highfalutin Ring Magazine has no American middleweights in their Top 10.

Sure, some of the top 160-pounders fight exclusively (or semi-exclusively) out of the U.S., but to have such a lack of American talent in one of the sport’s glamor divisions speaks volumes about boxing’s diminishing role in the hearts and minds of Americans.

No, the current favorite phrase of the boxing intelligentsia is not true–the best boxers aren’t playing other sports. Boxing is simply not doing enough to reach out and capture the interest of the fans. And with the sport constantly marginalizing itself with politics, controversies, and poor business decisions, things will not be getting any better for the American scene.

More and more, the final segment of HBO Boxing, where the 81-year-old Larry Merchant “puts it all into perspective,” is sounding like the rambling talk of a half-senile elderly uncle at Thanksgiving dinner.

Merchant’s Mike McTigue-Battling Siki story prior to Saturday’s Martinez-Macklin main event was especially cringe-worthy as, at the end, he seemed to have a moment of clarity and realization that he had wandered out the front door in his pajamas and was now at the 7-11 eight blocks down the street.

I’ve always felt that Merchant was a guy who carried his own personal biases into his work and I have a real problem with an analyst who does that, but I think this is beyond a personal distaste for his on-air style. I don’t think Merchant can handle the gig anymore.

You can email Paul at paulmagno@theboxingtribune.com or catch him as he investigates the modern phenomenon of Twitter Balls and its role in the Universo Pugilistico. Paul is a full member of the Burger King Kids’ Club, a born iconoclast, and an ordained minister in the Universal Life Church.