The Houston boxing scene is one of the best in the sport, and twin brothers Jermell and Jermall Charlo are hoping they can add their names to the long list of successful Houston area fighters topped by legendary heavyweight champion George Foreman. 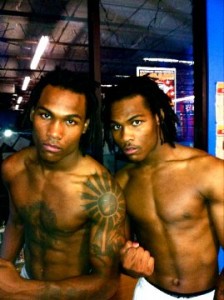 Undefeated as professionals and campaigning at junior middleweight, Jermell, 16-0 (7 KOs) has twice as much professional experience as his brother, while Jermall, 8-0 (4 KOs) holds the one minute age advantage.

I caught up with the brothers ahead of their scheduled bouts on the untelevised portion of the undercard of the Erik Morales vs. Danny Swift and James Kirkland vs. Carlos Molina HBO doubleheader.  The show will take place March 24th at Reliant Arena in Houston, Texas.

Both prospects began fighting at a young age, seeking to follow in their father’s footsteps as a boxer.

“My father was a fighter so we just basically carried it on,” Jermell said.  “He didn’t fight professionally, but he did fight as an amateur for a long time, training with many professionals.”

The brothers employ similar strategies inside the ring. Both fighters believe a good jab is paramount to their success.

“I’m best at my jab and counter movement,” said Jermall.  “It’s taken me to where I’m now. I’m in love with my jab.  I use it to get started then use different punches from my arsenal to finish.”

Jermell shared similar sentiments though he considers his jab more of a primary weapon rather than something to use in order set his opponents up.

“My jab is a punch that I don’t just use to set up; I use it to hurt.  When fighters see me, they see a strong jab.”

Don’t expect to see the brothers inside the ring against each other any time soon, though, unless it’s to cheer each other on.  Like boxing’s most famous set of brothers, the Klitschkos, the Charlo brothers don’t plan to fight each other.

“Jermell and I made a similar agreement to each other that we will take to whatever division we grow into and hold titles there,” said Jermall. “Last time we did spar, it was too intense so [trainer] Ronnie Shields won’t allow it anymore.  We are each other’s motivation not competition!”

No matter what happens in the ring when they spar, the brothers maintain a good perspective on life outside of the ring.  Jermall describes himself as “a horseman and a family guy.”  He owns three quarter horses and said he focuses on being a strong role model to his younger family members.

Jermell agreed that being a role model was important, and he also expressed a desire to just relax when he’s not training or fighting.

“I just kick back and try to make moves for myself—hang out and try to enjoy life,” he said.

While Jermell is getting prepared for his scheduled opponent, Chris Chattman, his brother’s opponent has yet to be named.  When asked how one is to prepare for the dreaded TBA, Jermall had as good an answer as any.

“The way I prepare myself for a TBA is by staying in shape,” he said.  “I’m in Big Bear, California [training] alongside ‘Sugar’ Shane Mosley who is my advisor.”

While Jermall has the benefit of working with former world champion Mosley, Jermell is the one currently signed to a promotional contact under Golden Boy Promotions.  Jermall is hoping for a similar arrangement soon.

“I’m still waiting for the right promoter’s call,” he said.

Regardless, both Charlos hope to represent their hometown of Houston, Texas proud in their careers.   Each expressed hope of getting the hometown fans behind them, which because of the state’s burgeoning boxing schedule over the last couple of years, can only help to make Team Charlo’s future that much brighter.