ESPN2 offers up a battle on the fringes of the welterweight division on its weekly Friday Night Fights series, as Roberto Garcia (30-3, 21 KOs) takes on Antwone Smith (21-3-1, 12 KOs) in the main event. In the co-feature, hard-punching journeyman and Philadelphia native, Tyrone Brunson (21-1, 20 KOs), seeks to prove that he’s more than just another non-prospect with a padded record as he steps up in class to face James De La Rosa (20-1, 12 KOs). 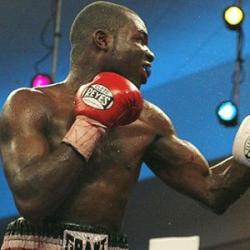 Roberto Garcia at one point looked to be making a name for himself on the outer perimeter at 147, fighting Freddy Hernandez in 2007 for a minor title. That fight ended after three rounds in a no-contest as Hernandez was cut from an accidental clash of heads and unable to continue. It was Garcia’s third twelve-round fight of his career, and it is telling that he has not fought at that scheduled distance since. A ten-rounder against Antonio Margarito for a belt in the WBC hierarchy in 2010 had the chance to catapult Garcia to bigger and better things, but Margarito handily defeated Garcia by a lopsided unanimous decision as a tune-up for his fight with Manny Pacquiao.

Across the ring from Garcia, stands a guy best known for his Monica Seles-like grunting on FNF last August in a losing effort against Kermit Cintron. Antwone Smith has neither major stopping power in his fists (all 12 of his knockout victories have come against the kind of opposition that any half-decent fighter knocks out) nor particularly solid technique (as Cintron showed last year). What he does have is enough ability to make him competitive, and exactly how competitive will be shown on Friday night.

This is an intriguing matchup on its own merits, but the loser may be better off than the winner in terms of getting money fights as a stepping stone down the road. The winner will be slightly feared but not respected, which is a recipe for having trouble getting opponents in the future. Then again, if either fighter wins by a decisive, show-stopping, SportsCenter highlight KO, that might bode well for his marketability.

The co-feature has no such Pyrrhic implications. Tyrone Brunson wants to prove that he is better than his SEC homecoming-quality strength of schedule thus far. In addition, he is coming out of retirement after three years away from the sport; in his last bout, he was savagely exposed as a pretender by Carson Jones, who was 23-7-1 at the time of the fight. Brunson is perhaps best known for his attempt to set the “most consecutive 1st-round knockouts” record, knocking out 19 guys who were barely better than the string of hobos Homer Simpson fought in “The Homer They Fall.” Mark Vester of Boxing Scene compared Brunson to Edwin Valero saying, “Valero stopped his first 18 opponents in the first round, and as bad as some of them were, they don’t even compare to the stiffs that grace the resume of Brunson.”

Trying to make lightning strike twice, is James De La Rosa, who is a massive step up in class for Brunson. De La Rosa owns a win over Tim Coleman back when Coleman still had heart (in contrast to the Coleman we saw roll over like an obedient puppy against Kendall Holt last week), but also lost to Allen Conyers in his last fight, a year ago, in what would be the last of Conyers’ 12 wins as a pro thus far (Conyers is currently 12-6, 1-4 in his last five including the De La Rosa fight, and still active, but does not look capable of ever winning a fight against even a B-level opponent again). Most importantly, De La Rosa has a heart if not a chin; he went the distance in that lone loss despite getting dropped three times.

So, what fans are left with is a hell of a question–is Tyrone Brunson a joke or does he have any real ability as a boxer? If he can knock out James De La Rosa in the first round the way he did those nineteen tomato cans to start his career, he will have proven that he can beat someone who is not a hobo. If De La Rosa blasts Brunson out the way Carson Jones did, it will be everyone-point-and-laugh time for the Philly-based junior middleweight. Either way, it should be a hell of a contest for as long as it lasts, whether that’s one round or the full eight.

Friday Night Fights airs on ESPN2 and online at ESPN3.com on Friday, March 23rd at 9 PM Eastern/6 PM Pacific, live from the Convention Center in Pharr, Texas. The Boxing Tribune will have a full recap of the night’s action, including any swing fights that make air, shortly after the conclusion of the telecast.