The boxing career of junior middleweight contender James Kirkland (30-1-0, 27 KOs) has been anything but smooth sailing.  After a standout amateur career the Austin, Texas native turned pro in 2001 and quickly became one of the sport’s hottest prospects.  As 2003 came to a close, he was 11-0 with 9 knockouts, seemingly destined to become a champion.  Then he didn’t fight for 2 years, at least not in a prize ring.  The inactivity wasn’t by design, however, as James spent ’04 and ’05 in prison for armed robbery.  Upon his release Kirkland appeared to have picked up right where he left off, knocking out 14 opponents during a post-incarceration streak of 15 consecutive wins.  Then, unfortunately, trouble found him again.  Kirkland would spend another year in prison after being convicted of a firearms charge in 2009. 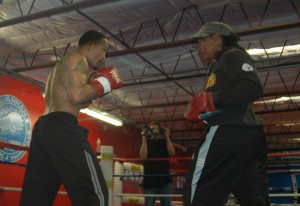 After being released and rebooting his career for a second time, Kirkland parted ways with trainer Ann Wolfe.  Renowned for being a female trainer in the decidedly macho world of professional boxing, not to mention her extreme (some might say brutal) training methods, Wolfe groomed Kirkland into the violent frenzy he had become.  She often talks of fighters as if she’s training pit bulls, encouraging her charges to think of themselves as wild beasts that, once uncaged and set in the ring, wreak havoc on any man in their path.

Without Wolfe, Kirkland suffered a career setback perhaps even more damaging than his two prison terms.  Last March he was shockingly knocked out in the first round by unheralded Japanese fighter Nobuhiro Ishida.  A boxer’s first loss generally isn’t the end of the world, but to be stopped in the opening frame by a virtual journeyman is certainly a pretty big step backwards.

After the loss, Kirkland reunited with Wolfe, and the results were staggering.  Just seven months after the loss to Ishida, the fighter/trainer team would face a monumental task.  Kirkland found himself in the ring with Alfredo Angulo, the man who had taken Kirkland’s place as the most feared knockout artist in the 154-pound division.  The fight would also be staged on Angulo’s home turf in Mexico.  Many in the boxing world thought it was career suicide to place a man who had been stopped by the light-punching Ishida in with a banger like Angulo, and their concerns seemed to be well founded when Angulo put Kirkland down early in the fight.

While the fight began the same way as the prior loss, it ended much differently.  This time Kirkland got up, weathered the storm, and proceeded to gradually turn the tables.  By the sixth round he had savagely battered Angulo to the point where the fight was stopped.  Kirkland, with the help of Wolfe, was back.

While Wolfe’s extreme techniques may not work for every fighter, her chemistry with a brawler like Kirkland seems to be perfect.  He is the type of guy that is at his best when he says to hell with precise technique and just goes in trying to cause pain.  Wolfe gives him the perfect kind of encouragement to do just that.

In order to keep his momentum going, Kirkland will need to get past a solid opponent this Saturday on HBO.  Carlos Molina (19-4-2, 6 KOs) is another tough Mexican fighter on a hot streak, it’s been over five years since he’s lost a bout.  Molina is also a high effort type of combatant, and he will have no plans of giving Kirkland an easy night.

Wolfe likes this type of fight for Kirkland, though.  She has at times compared James to a lion, saying that he needs live prey to hunt in order to be at his most savage.  Expect the duo to be well prepared to handle Molina, and expect the momentum they have established the last few fights to continue to build towards a world title fight in the near future.  That would allow for a bit of boxing history, as Wolfe would be the first woman to ever train a world champion.  At their current pace, it seems like an accomplishment she’s likely to achieve.