Rees made light of the fact that he was fighting in his opponent’s hometown and went about making the scorecards redundant when he opened a cut high on Mezaache’s forehead late in the second round. 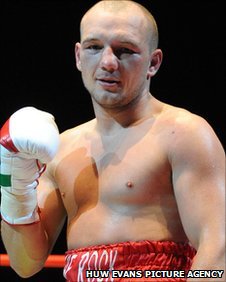 In the middle of the third, the referee asked the doctor to take a look at the cut as blood cascaded down the challenger’s face, and then he was allowed to continue. Mezaache threw everything he had at Rees, but the cool Welshman made good use of a sound defence and quality head movement to negate the Frenchman’s work, and he landed heavy combinations of his own.

By the seventh, Mezaache’s face was a mask again and he was shipping heavy punishment from the slick Rees, but battled on bravely. He took an eight-count early in the eighth, and was then battered against the ropes by Rees and the referee wisely stepped in.

Over the Channel at the Civic Hall, Wolverhampton, fellow Welshman Enzo Maccarinelli won the British cruiserweight crown from Shane McPhilbin in a bizarre encounter in which both men visited the canvas, and Macarinelli was dropped twice.

Enzo appeared to have retired back in 2010 after a devastating knockout loss to Alexander Frankel appeared to confirm that his punch resistance had finally deserted him. The Frankel loss was the fourth time Maccarinelli had been badly knocked out in two years, and each beating had appeared worse than the last.

Undeterred, the former WBO cruiserweight champion re-launched his career as a light-heavyweight, winning a couple of tune-ups while trying to manoeuvre a fight with countryman Nathan Cleverly, but took the fight with McPhilbin, who sported a record of 8-2, 5 KO’s and who won his title less than two months ago, believing that a win would put more pressure on Cleverly to take the fight.

In fact, and despite winning, Maccarinelli has put any thought of a Cleverly fight to bed. McPhilbin must be one of the least skilled fighters to have won a British belt, and yet he had the Welshman down heavily in both the first and third rounds. Indeed, the first knockdown, at 2:03 of round one should have concluded the fight – Macarinelli went down from a McPhilbin right, got up quickly but clearly couldn’t keep his legs, so went down on his haunches. When he rose at 9, he appeared to believe the round was over and moved towards his corner. McPhilbin hesitated, confused, and eventually referee Ian Lewis jumped between them and signalled the end of the round – except that there remained 45 seconds, during which had he been given the opportunity, McPhilbin would surely have knocked Maccarinelli out.

Instead the fight continued, Maccarinelli stumbled through the second round courtesy of McPhilbin’s lack of ability, but then got himself dropped heavily again in the third. Again, McPhilbin lacked the skills to press home his advantage, and steadily the Welshman clawed his way back into the contest. By the championship rounds he’d resumed control with a jab and straight right, and as McPhilbin tired Maccarinelli simply landed cleaner punches through to the fights conclusion.

“That’s the worst I’ve ever boxed. He caught me cold in the first couple of rounds. I was fine when I got up and I felt weak in there. Shane got his tactics just right.”

On this showing Maccarinelli should seriously consider hanging them up. McPhilbin was barely more than a novice, and it is shatteringly obvious that Enzo can no longer hold a shot. If he fights again I’d have serious concerns for his health.