Houston, TX — James Kirkland came to fight.  Carlos Molina came to win.  Neither got what they wanted Saturday night in Texas.

Kirkland opened the bout by focusing on his opponent’s body, but Molina caught him with cleaner, harder shots after pushing James to the ropes, and before taking a slight step back to throw the thunder.  Kirkland seemed unable to react, at least early, to this strategy which continued to play itself out over the rest of the fight. 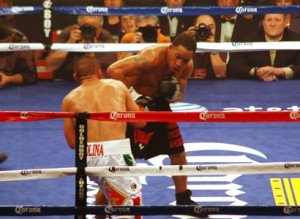 It was more of the same in rounds two and three with Molina using distance and fancy footwork to keep Kirkland missing while connecting himself.  He also was able to keep Kirkland tied up when the latter would try and bull rush his way in behind a lead straight right.

Absent from the fight for Kirkland was any sort of jab to work his way in behind, which left numerous opportunities for his opponent to catch him with clean, hard shots.  After the fight, Kirkland explained he was suffering from an injury to his right arm.

Despite the injured arm, Kirkland started to connect more in round four.  His lead right, missing mostly in the first three rounds, was getting through as were some good uppercuts.  Molina hurt Kirkland at the end of the round, though, so the round was close.

The pattern of Molina bullying his way in to hold and tie Kirkland up before stepping back to create space for his punches was a frequent strategy employed by Monlina in the fight.  It was effective, but as the rounds wore on, it was less effective strategy and more just egregious holding.  Referee John Schorle did nothing to deter it, though.

Both fighters had their moments, until round nine when it appeared the tide had turned for Kirkland.  Where before Kirkland was not able to land cleanly and effectively, he was doing so now.  Molina appeared hurt in round nine, and was again stunned in round ten where he did everything in his power to hold onto dear life up until the very last second of the round.

Kirkland sent Molina to the canvas with just a tick left on the clock in the round, and the referee began his count.  Molina made it to his feet, but the count was not over when Molina’s corner began entering the ring.

Time seemed to stand still when Schorle went over to confer with the Texas Commission, but then speed up again when he waved the fight off, declaring Kirkland the winner by disqualification because of Molina’s corner entering the ring.

No one was happy with the result.  Kirkland lamented not having rounds eleven and twelve to test Molina’s mettle.

“I wanted to take him to deep waters,” he said after the fight.

Molina, who has been on the wrong end of some close decisions one too many times, thought he was too far ahead in the fight for it to end the way it did.

Even Schorle was upset.

“That was the first time that I had to do that,” he said.

To his credit, Kirkland appeared anxious to give Molina a rematch, as did promoter Oscar De La Hoya.

“We can absolutely do a rematch,” said De La Hoya at the post-fight press conference.