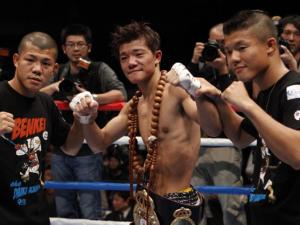 Kameda turned pro in 2006 and made his first world title challenge less than two years later, losing a unanimous decision to fellow Japan native Daisuke Naito. Kameda would go on to grab his first world title in 2010. After losing a close majority decision to Denkaosan Kaovichit, Kameda would win the return bout by way of unanimous decision.  Kameda made two successful defenses of his flyweight title – one coming against Takefumi Sakata – before moving up to the super flyweight division. He last fought in December, losing to Tepparith Singwancha in a bid for the WBA super flyweight title.