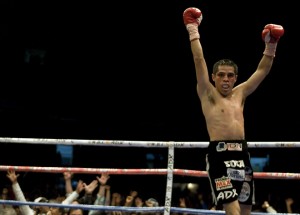 Sosa would suffer a first round knockdown and find himself generally out-hustled by Uicab over the first five rounds of the bout. A point deduction against Uicab for a Chad Dawson-like toss of Sosa to the canvas would keep the veteran within reach, but Uicab was clearly ahead.

In the sixth, however, Sosa’s straighter punches and better timing began to take over. A flash knockdown of Uicab would officially announce the changing of tide.

From that moment, Sosa was in full control against a tough and dedicated Uicab, who found himself simply being outclassed by a better, more experienced fighter.

At the end of the twelve scheduled rounds, all three judges had Sosa taking the contest by the same score: 114-111. The Boxing Tribune scored the bout 115-110, also for Sosa.

In the co-feature, fought at the junior welterweight limit, Humberto Soto (58-7-1, 34 KOs) played it safe, went through the motions, and scored an easy ten round unanimous decision over Brazilian former MMA pro, Claudinei Lacerda (14-3, 10 KOs). The former two-division world titlist would make a couple of token gestures to press the action, but eventually settle into an even pace against his over-matched opponent. The official scorecard was not announced on TV, but it’s hard to imagine that it differed from The Boxing Tribune’s unofficial mark of 100-90. Soto now moves on to face Argentina’s Lucas Matthysse on the June 23 undercard to Victor Ortiz-Andre Berto II.