Future hall of famer Juan Manuel Marquez (53-6-1, 39 KOs) will square off against WBO European jr. welterweight titlist, Serhiy Fedchenko (30-1, 13 KOs) on Saturday, April 14 at the Mandalay Bay Resort and Casino, and will headline a night of fights on HBO Pay-Per-View that is more fit for a Top Rank “Latin Fury” Pay-Per-View broadcast. This 12-round bout for a vacant WBO jr. welterweight “title” will receive its lead-in from another mismatch featuring Brandon Rios taking on little-known Cuban lightweight, Richard Abril. 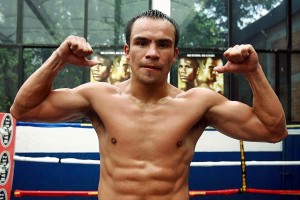 Marquez, who is fighting for a possible future shot at Rios, and eventually Manny Pacquiao, comes into the fight in the twilight of his career, but possessing the skill and experience that should allow him to easily dispatch of Fedchenko. This marks the third straight fight north of 140 pounds for Marquez, who knocked out Likar Ramos in one round last July, and lost a heartbreaking split decision to Manny Pacquiao last November in a fight many thought he won.

Fedchenko has fought all but one of his fights in his native Ukraine, and aside from his 2010 win over a shop-worn DeMarcus Corley, he has only one other notable name on his resume – a 2009 majority decision loss to Kaizer Mabuza. Fedchenko made one defense of his European title last November, and took a stay busy fight against Laszlo Fazekas in February.