Garrett Wilson showed the tremendous improvement he has made in the last six bouts as he dominated and finished Andres Taylor in a rematch of their fight in September of 2010.  The twelve round cruiserweight bout was held at Bally’s Atlantic City by Peltz Promotions.  Wilson was putting his USBA title on the line and the vacant NABF title was up for grabs as well. 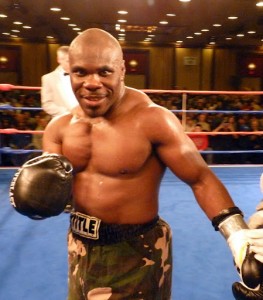 In their first meeting, Wilson took the fight on one days’ notice and fought to a draw in Taylor’s hometown of Johnstown, PA.  This time around Wilson, who comes from Philadelphia, had a neutral site in Atlantic City and was looking to use this bout towards positioning himself for a title shot down the line.

Wilson wasted no time announcing his intentions in round one as he put Taylor on the canvas with a left hook and right hand.  Wilson was able to land the powerful left hook with ease all night.  The shorter but faster Wilson would slide inside to land that left hook to the head and body.  Wilson was also successful dancing around the ring on his toes and fighting on his terms.  Taylor was forced to follow Wilson around the ring only to walk into Garrett’s traps.

Wilson calls himself the “Ultimate Warrior” and talks of striving to be the complete fighter.  He took another step forward tonight with his performance.  Wilson controlled nearly the entire bout.  Taylor had a brief moment in round five, hurting Wilson with a right hand but he quickly recovered and had little issue from that point on.  Wilson dropped Taylor again in round eleven with yet another hard left hook.  Taylor bounced off the canvas and barely made it to his feet.  Despite wobbling around the fight continued and Taylor was briefly saved as the bell rang.

Wilson seemed to come out cautious for the final round knowing he had a huge lead on the cards (the Boxing Tribune had Wilson ahead 108-99 going into the twelfth) but midway through, he started heating up again.  Late in the final round, Wilson connected with one last crushing left hook that put Taylor on his back and out cold where he would remain for several minutes.  Taylor did eventually rise on his own accord and was able to leave the ring on his own.  Wilson erased any doubts from the first fight with Taylor getting the knockout at 2:50 of round twelve.

Wilson knew he would get a hard fight from the experienced and talented Taylor.  He had plenty of help preparing for the rematch and opportunity to enter the IBF top five and he credited his gym mates for the assistance.

“He’s a tough guy, really tough guy.  I didn’t expect anything less than a tough fight from him.  But I knew by who I was training with.  I been working with a lot of good guys.  Yusaf Mack, Dhafir Smith, Eddie Chambers, Steve Cunningham himself.  I been working hard.  Trying to get me the IBF next.”

With the win, Wilson retains his USBA belt, picks ups the NABF strap, and will enter the top five of the IBF.  More importantly, Wilson continues to improve his craft with each fight.  Since the draw with Taylor in 2011, Wilson has won five in a row with four of those wins being knockouts.  He has done this against top competition as the records of those five opponents is 93-18-5.  Wilson has improved his boxing ability and learned to use his power far more effectively with each outing.  Someone who only had three knockouts in his first fourteen fights is now knocking opponents down and out more often than not.

He may be a few fights from a title shot but Wilson would like to see things happen sooner.

Christopher Finley of Detroit, MI and Osnel Charles of Atlantic City went to war in a six round lightweight bout.  Both fighters had little use for defense as they traded bombs early and often.  Finley built a lead early, getting the better of the action and dropping Charles in rounds one and three.  Both times Charles went down he was hurt but managed to survive.  Charles came on landing hard right hands in rounds four and five but it was too little too late.  Finley 5-4 (4 KO) took a unanimous decision by scores of 59-53 and 58-54 twice.  Charles drops to 9-3 (1 KO).

Philadelphia junior welterweight prospect Naim Nelson 6-0 (1 KO) got his first stoppage win finishing Dontre King 6-10-2 (2 KO) of Cambridge, MD in the fourth of a scheduled six.  Nelson was having his way through the first three rounds and landed a big left hook in the fourth.  King wobbled around the ring and the fight was stopped when Nelson went after King who was not returning fire.  The stoppage seemed a little fast but King was lying on the ropes not answering punches.  The official end came by TKO at 1:53 of round four.

Joshua Reyes 2-0 had an easy time dominating debuting Elvis Rodriguez 0-1 to a unanimous decision win in a four round featherweight bout by scores of 39-37 and 40-36 twice.  Rodriguez of Millville, NJ had no answer for the constant pressure of Reyes from Manchester, PA who repeatedly put his man on the ropes where he could do damage on the inside.

Julio Dejesus 5-3-2 (3 KO) of Millville, NJ and Korey Sloane 2-3-1 (0 KO) of Philadelphia, PA fought to a draw in a four round junior welterweight bout.  The short Dejesus who is a solid ball of muscle was able to pressure and push Sloane around the ring for most of the fight but apparently the judges did not see the same thing.  Scores were 39-37 for Sloane, 39-37 for Dejesus, and 38-38.  Dejesus wobbled Sloane several times in the third round with wild overhand rights but was unable to finish the job.  It cost Dejesus the win as he let it go to the judges.

In the opening bout Gabriel Pham 5-0 (2 KO) won a unanimous decision over debuting Michael Mitchell 0-1 in a four round super middleweight bout.  Pham fought through multiple cuts from head-butts as the orthodox Mitchell often bulled in headfirst against the southpaw Pham.  Pham had his best moments using his long reach to set up the jab-cross combination.  Pham won by scores of 40-36 on all three cards in a fight that felt closer than the final scores.

In the walk-out bout Todd Unthankmay 3-0 (2 KO) scored a fast knockout of Ronnie Lawrence 0-2 at 27 seconds round one.  The light heavyweight bout was scheduled for four and was a rematch of a fight last year that Unthankmay won by decision.