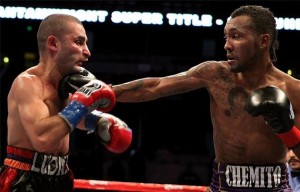 Moreno is making the twelfth defense of the title he took from Volodymyr Sydorenko in 2008. The crafty, defensive-minded southpaw’s title defenses include another win over Sydorenko, two close split decision wins over Nehomar Cermeno, a TKO win over Lorenzo Parra, and a virtuoso display of his diverse talents in last December’s win over Vic Darchinyan. Despite being the best bantamweight in the world and only 26 years of age, Moreno garners little-to-no interest in the American market, and is making his second straight start in support of Abner Mares on Showtime since signing with Golden Boy Promotions in 2011.