Plenty of unblemished records will be on the line on ESPN2’s Friday Night Fights this week as matchmakers trade the risk of a loss against the reward of a national television date. Rapidly rising Ukrainian light heavyweight contender Ismayl Sillakh (17-0, 14 KOs) looks to maintain his upward career trajectory against Denis Grachev (11-0-1, 7 KOs) in the main event, while in the co-feature, junior lightweight Yuandale Evans (16-0, 12 KOs) makes his second appearance on ESPN2 as he takes on the decorated-in-the-amateurs Javier Fortuna (18-0, 13 KOs) in a ten-round true co-main-event. 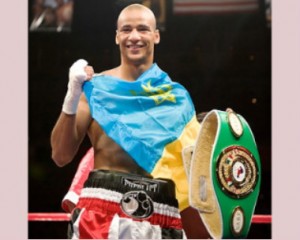 Not for nothing was Ismayl Sillakh named as one of the Fighters To Watch In 2012 in The Boxing Tribune’s year-end spectacular last December. After Sillakh totally exposed Yordanis Despaigne on FNF last March and pointedly proved Teddy Atlas’ point about Despaigne that “he may look like Hercules but he doesn’t fight like Hercules”, knockouts of Hamza Wandera (whose name sounds like a Harry Potter spell) and Ali Ismailov (the sole entertaining fight on the otherwise lackluster Lebedev-Toney card last November) have the Klitschko brothers’ countryman looking closer than ever before to a world title shot. Sillakh also owns a win over Rayco Saunders, last seen on FNF last week acting as a human heavy bag in Montreal.

Standing in Sillakh’s way on the road to a title is Denis Grachev. Hailing from Chaykovsky, Russia (not to be confused with the Russian composer Tchaikovsky) and fighting out of San Diego, California, Grachev has a major experience deficit compared to his FNF foe this week. He does, however, have two wins to his credit against unbeaten prospects, one an eight-round majority decision over then 9-0 Azea Augustama and then, rather more notably, a fourth-round TKO of Vladine Biosse at Foxwoods in Connecticut last May.

Grachev has a ton of talent, some decent power, and the beginnings of a genuine record in the pros, but moving from Azea Augustama and Vladine Biosse to Ismayl Sillakh is rather like playing touch football in the backyard and then being expected to suit up against the New England Patriots in the Super Bowl. Will Denis Grachev be Eli Manning? Or will he end up like the guy in that old Snickers commercial who, after being slammed to the turf, proclaimed “I’m Batman”? Ismayl Sillakh is a world-class fighter. This would be a hell of an upset were Grachev to add Sillakh’s scalp to his budding collection.

Meanwhile, Yuandale Evans, who has flown under the radar as a Cleveland-based prospect these past few years, gets a chance to build on a very solid performance on FNF last year in which he pasted Emmanuel Lucero in six rounds in the co-feature behind the disgraceful Francisco Sierra (who weighed 175 for a super middleweight fight against Jesus Gonzales) last July. Aside from that fight, Evans has otherwise fought weak to middling competition; his last fight, easily a step down in class, came in November, a third-round TKO of 16-18-1 Andres Ledesma, who took his ninth knockout loss in that fight. Most of Evans’ opponents have been either as green as an unripe banana or else well steeped in mediocrity; his opponent in this co-feature is the first undefeated fighter to grace his resumé if you don’t count the one guy (Fred Bowen, in 2009) who was making his pro debut.

Facing Evans will be Javier Fortuna, who as mentioned above had a very good amateur career, winning a silver medal in the 2005 Pan Am Games as a 15-year-old. Four months ago, Fortuna went the ten-round distance for the second time in his career (Evans has never been past eight), handing the veteran Miguel Roman (who had won nine of his last ten, eight by knockout) a defeat by unanimous decision and depositing Roman upon his duff at one point during that contest. Fortuna, in his lone fight against a fellow unbeaten prospect in December of 2010, destroyed Victor Valenzuela, requiring only seventy seconds to complete the job, the end coming on a left hand so vicious that even notorious referee Arthur Mercante Jr. saw fit to stop the bout without a count. The Boxrec description of the fight is telling: “Valenzuela went stiff and fell to the canvas face first.” If Fortuna can bring a similar big shot to bear upon the chin of Evans, this could be, depending on your tolerance for the nastier elements of the sport, either great fun…or terribly scary. Either way, Javier Fortuna has big power in his fists, and whatever may be said of Yuandale Evans’ level of opposition, he has delivered the goods on television before. Make sure you’ve got a full beer and a full plate of nachos, because you won’t want to get up lest you miss something potentially awesome.

Friday Night Fights airs on ESPN2 and ESPN3.com at 9 PM Eastern/6 PM Pacific on Friday, April 27th. The Boxing Tribune will have a full recap of the night’s action, including any swing fights that make air, following the conclusion of the broadcast. Stay tuned—we’re the worldwide leader in covering the Worldwide Leader.

Fox Doucette covers Friday Night Fights for The Boxing Tribune. His weekly column, The Southpaw, appears on Thursdays. Fan mail, hate mail, and the head of Bobby Valentine can be sent to beatcap@gmail.com.