Yusaf Mack has been to the big dance.  He has fought in multiple eliminators and fought for a world title.  He is well known and well respected in his home city of Philadelphia, a city known for producing great fighters.  What Mack has not done is get over that hump to reach the top.  He is yet to win that big fight that brings him a world title. 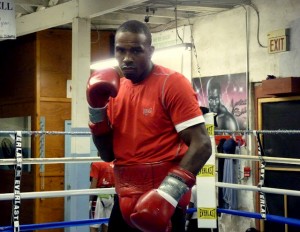 Now at thirty-three years of age and a veteran of twelve years as a pro, Mack is well aware that he needs to act now if he is going to achieve his goal of becoming a world champion.  Friday night he takes on veteran war horse Omar Sheika at Resorts Casino in Atlantic City.  A win gets him the USBA Light Heavyweight strap, but, more importantly. gets him into the top five IBF rankings.  With his name and the ranking he would have a good chance of getting a second shot at that world title.

Mack had that opportunity in his last fight against Tavoris Cloud in June of last year.  It was a fight where he was doing well early.  Mack was boxing and moving well against the aggressive champion.  When he moved and used his jab he was successful.  He had Cloud bleeding from the nose and was ahead on two scorecards entering the eighth round.

But too often he got off his game plan by standing and trading with Cloud.  When I caught up with Mack at Shuler’s Gym in West Philadelphia he stated what he should have done differently against Cloud.

Mack talked about seeing the fight between Gabriel Campillo and Cloud.  Cloud won the decision, but most observers believed that Campillo should have been given the decision after out-boxing Cloud the majority of the fight.  Mack believes if he had stuck to his game plan he would have done the same thing.

“Definitely, this last fight the way Campillo just beat him; I could have done the same thing.”

It’s something that has cost Mack more than once.  A loss of focus when doing well in a big fight cost him against Cloud and previously against Librado Andrade.  Mack dropped Andrade in round one and lost focus after that.

“I was hitting him (Cloud), I was hitting him with shots I could see, dude ain’t nothing, and got caught with a shot I didn’t see.  Like I did Andrade.  I knocked him down in the first round and I got excited and lost my whole game plan.”

This Friday Mack returns to the ring for the first time since the Cloud loss.  His opponent, Omar Sheika, is in a similar position.  Sheika has had opportunities at a title without succeeding and is looking to get another shot.  Mack was given the option of selecting anyone in the IBF top fifteen to be his opponent for the USBA title bout.  He thought Sheika made the most sense.

“He’s crafty; he’s a hard name to get on my record so I figured I would pick the old vet.”

Mack’s trainer Percy “Buster” Custus is familiar with Sheika and knows he can’t be taken lightly.  Custus, who runs the famous Shulers Gym talked in high praise about Sheika, comparing him to one of Philly’s most loved fighters.

“Omar is nobody to play around with or take lightly.  We could have had a tune up but we didn’t.  Yusaf’s gotta step up to the plate.  You got an old work horse, a guy you got to almost knock out to beat him.  He reminds me of Benny Briscoe and I used to spar Benny all the time so I know what we up against.  That’s one aspect we have going for us.  I know what Omar’s about, I respect him, I like him.  It’s a crossroads fight for both of them.”

In Sheika, Mack will face his own personal demons. Sheika is the exact model of the other fighters such as Cloud, Andrade, and Glen Johnson that have beaten Mack.  Sheika comes forward with relentless pursuit.  He sees a boxer as someone that simply needs to be chased down over twelve rounds, cornered, and broken apart.  Mack will have to follow his own mantra, stick to the game plan, and be in shape to do it over the full twelve rounds.

Mack believes he is ready to do just that.  He also believes at thirty-three, at this point in his career, it is now or never to get to the top.

“I’m gonna make him pay off his mistakes.  I’m going to give him a sight that won’t be there when he gets there.  Move, move, move, and run him into stuff.  Hopefully I cut him up but if I don’t and get the win I’m happy.”

“I feel as though I lose to Sheika, I’m nothing.  To myself if I lose to this dude, I’m done.  He just had losses to, not saying nobodies, but dudes that are not even on my level.  Basically I’m testing myself.”

Custus weighed in on the importance of this fight for both Mack and Sheika.

“Definitely, both of them, you know Omar needs it too.  You know, it’s like I told him this is a make you or break you fight.”

For Yusaf Mack the question has never been if he has the skill to be on top.  When on his game he is the definition of a beautiful pure boxer.  Mack talked of finding the mentality he once had back when he was a young undefeated fighter.  He knows he has skills and wants to get back to believing in his abilities and believing that he can beat anyone in front of him.  Mack believes if sticks to the game plan he can defeat anyone.  It is simply a matter of mind over matter.

Mack finished up the interview by stating he is in a place now to make all that happen.  He believes he still has the skill and now has the wisdom and stamina to do what he needs to do to defeat Sheika and anyone after that. He would like another shot at Cloud or anyone else at the top of the division.  But first he has to get past Sheika.

“Hopefully I can fight Cloud again.  I would love to fight Cloud, Bernard, the winner of Chad and Bernard, whatever.

“I’m ready.  Omar Sheika, watch out because I’m coming.  This ain’t gonna be the same Mack attack you see fading out in the eighth round.  Eighth round comes, I might blow him a kiss and say let’s go.”