It’s the poor man’s welterweight title that’s up for grabs in the Ukraine on Sunday when Vyacheslav Senchenko defends his WBA strap against perennial contender and all round motormouth Paulie Malignaggi. 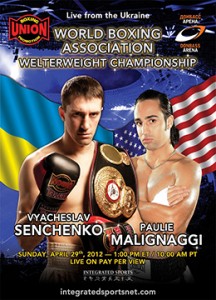 Senchenko’s on home soil at the Donbass Arena in Donetsk, and he entertains the American self-styled “Magic Man” in a fifth defence of a title he won back in 2009 with a points verdict over fellow Ukrainian Yuriy Nuzhnenko.

In fact, Senchenko’s 32-0, 21 KO slate looks decidedly homespun (you can count the number of times he’s boxed outside his home town on the fingers of one hand). Missing too, are very many “name” fighters on his record whose reputations have spread further than the Soviet Bloc. At 35 years of age the champion is at the top of the tree, but in climbing it he’s taken a pretty trouble-free route.

That can’t be said of Malignaggi, who’s very easy to dislike, but has a world title to his name (at light-welter) and a resume that shows he’s not one to shirk a challenge. In compiling 30 wins and 4 losses over a 10 year career, he’s shared the ring with the likes of Amir Khan, Ricky Hatton, and Miguel Cotto (granted, he was stopped by all three) and showed guts and resilience in each encounter. He’s on a three fight winning streak and it’s tempting to suggest that each of those beaten opponents were of a higher calibre than anyone Senchenko has swapped punches with.

Ever the showman, Paulie is excited to be boxing overseas, with the fight being beamed back to his adoring public: “I think it’s great because American fans don’t always get an opportunity like this to see fights held overseas” he said, “This is a high-level fight and not expensive pay-per-view. My fans will be able to watch.”

Senchenko has been training under the watchful eye of Freddie Roach at the Wild Card, lending the contest a touch of legitimacy it might have otherwise lacked. The welterweight division is currently talent-laden and it’s hard to see either Senchenko or Malignaggi troubling the Bradley’s, Mayeather’s or Pacquiao’s of this world. In times past, before the proliferation of a myriad of “world” champions, this is a fight that would have played out between two guys outside the world’s top ten in a Russian backwater half way down a provincial bill, winner takes home the pig.

Still, Senchenko sees himself as a legitimate power-broker in the division, and isn’t phased by the American’s verbal jousts: “Malignaggi is nothing special,” He said: “I know how to fight him. I plan to expose his weaknesses during the fight. I’m going to make sure that Malignaggi remembers my name for a long time. What he says does not bother me at all. I smile when I hear most of the stuff he says.”

Roach has it that Senchenko will have too much technique for Malignaggi, and the Magic Man’s feather-ish punching power seldom spells out an easy night for him up at the elite level – the question is whether or not Senchenko can bridge the gap between essentially domestic and world-class opposition. Expect Malignaggi to run the Ukranian close over twelve rounds, and one suspects the New Yorker might work out a points win that, away from home, he won’t get.