Yusaf Mack put on a dominant performance defeating Omar Sheika by convincing unanimous decision Friday night.  The light heavyweight showdown for the USBA title headlined at Resorts Casino in Atlantic City and was promoted by Nedals Promotions and KEA Boxing. 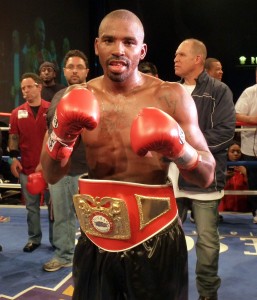 Yusaf Mack had a history of having difficulty against pressure fighters, especially late in fights.  Most recently he was stopped by Tavoris Cloud last year in a bid for the IBF title.  Mack had started strong, but faded late in the fight when he engaged Cloud instead of sticking to his boxing game plan and was eventually knocked out.

Tonight it was a different Yusaf Mack.  He didn’t waiver from his game plan and got stronger late in the fight.  Early on, it was clear Mack 30-4-2 (17 KO) was the superior boxer and could have his way with the veteran warhorse.  Sheika 32-12 (21 KO) came forward with his usual aggression, but Mack was a step ahead each time.  Mack began opening up in round two and found he could hit his opponent with ease.  He moved in and out repeatedly snapping Sheika’s head with the jab and a strong right hand over the top.

In round three, Mack started to slip a bit, allowing Sheika to press him to the ropes.  Correcting his mistakes of the past, Mack quickly got back to his game plan the next round staying in the center of the ring.  He landed with accuracy and was gone before Sheika could retaliate.  By round five he was mixing in uppercuts from both hands and seemed he could not miss with his accurate punches.

At the halfway point it seemed both men were beginning to tire.   The constant movement for Mack seemed to be wearing him down.  Sheika was still pursuing, but had lost steam and his punches were coming from wider angles due to fatigue.

Mack had stated leading up to the fight this would not be the same Mack Attack that faded at the eighth round.  He made good on his statements as he found a second wind late and again began taking the fight to his opponent.  He attributed hard work, discipline, and “running my ass off” to his new found endurance.

Mack closed the championship rounds with the same fire he had early.  Despite Sheika’s never quit attitude and pursuit this was going to be Yusaf Mack’s night.  In front of a vocal crowd supporting the two local fighters (Sheika from Patterson, NJ and Mack out of Philadelphia) Mack controlled the tenth and eleventh rounds.  Then in round twelve the accumulation took its toll as Mack dropped the iron chinned Sheika with a left hook.  Sheika made it up and managed to survive the round. 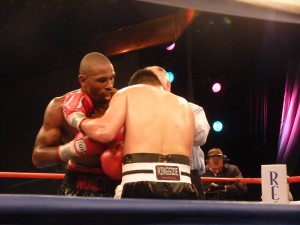 The scorecards were a formality as it was clear who the man was tonight.  Mack won by scores 119-107 and 118-109 twice.  The Boxing Tribune had it 119-108.  Mack stuck to his game plan as he said he had to do leading up to the fight.  The few times he fell into Sheika’s fight mixing it up in close he employed a solid defense to avoid getting hurt and quickly moved the fight back to a long range boxing match to gain the edge.  The Boxing Tribune spoke with Mack and trainer Buster Custus afterwards about the keys to winning and correcting past mistakes.  Mainly being in shape to have stamina and following the plan.

“What I say, eighth round I’m gonna turn it up.  I feel good.  I didn’t feel tired.  I wasn’t breathing hard.

“I stuck to the game plan.  He stunned me with a couple of overhands.  I think if I wasn’t in shape he probably would have knocked me out.  When he buzzed me I shook it off, get my Mayweather on a little bit and do what I got to do.”

Custus summed up Sheika’s toughness and Yusaf’s performance that allowed him to overcome his opponent’s aggression.

“I knew Omar was going to dig down deep and give us his last great fight; I knew that, I told him that.  It’s a crossroads fight for him.  Everyone’s thinking he can’t make it past eight rounds and all that shit.  Basically he trained at home for this fight.  So he went home at night like he’s supposed to and did some of the things he’s suppose to.  He took shots another guy might have gone out on.  It was one of his best fights”

Mack stated he wants to get another title shot after his performance tonight.

I’m going to do a little tune up on Percy’s (trainer Buster Custus) card July 7.  Then hopefully get back in there with Cloud or hopefully fight the winner of Bernard and Chad.”

In the co-feature, super middleweight prospect Derrick Webster survived a late scare to remain unbeaten winning a unanimous decision over Sabou Ballogou who came from Paris, France for the fight.  Through the first four rounds of a scheduled eight the Glassboro, NJ native was content to circle the ring and box from the outside using his long jab to control the fight.  In round five he picked up the action but then settled back into a cautious fight again in round six.

Just when it seemed Webster would cruise to an easy, but uneventful decision, Ballogou landed a right hook that sent Webster crashing to the canvas.  After barely making it to his feet he was dropped again shortly after for a second knockdown, again from a right hook.  Again he got up and instead of holding Webster chose to fight fire with fire, making for a lively conclusion to the round.  The eighth and final round featured more back and forth action and Ballogou could not get the knockout he was going for to turn the tables.

Webster earned the unanimous decision by scores of 77-72 on all cards and got a valuable learning lesson about allowing a lesser opponent to stick around longer than you should let them.  If he had stepped on the gas earlier in the fight he likely could have stopped his opponent but allowing him to hang around nearly cost him.  Webster moves to 13-0 (7 KO) while Ballogou falls to 8-5 (3 KO).

Juan Rodriguez delivered a one punch left hook knockout of David Crabtree at 1:59 of round two.  Rodriguez controlled the first round and then landed the bomb that put his opponent on his back.  Referee Alan Huggins called an end without counting and medical personnel attended to Crabtree who was up and walking within a few minutes.  Rodriguez out of Union City, NJ goes to 9-0 (3 KO) while Crabtree who came in from Hillard, OH falls to 3-5 (3 KO).

Thomas Lamanna 8-0 (5 KO) took a unanimous decision over Sean Wilson 5-10 (1 KO) by scores of 60-54 on all three cards in a six round middleweight bout.  The popular local product out of Millville, NJ Lamanna used his height and reach to control the fight.  Omaha, NE product Wilson, who is also an MMA fighter had some success with over hand rights, but generated little else and was not able to get a single round.

Wilkins Santiago defeated Alando Swain in a six round middleweight bout by unanimous decision by scores of 58-55 twice and 57-56.  Santiago, out of Lorian, OH goes to 5-0 (1 KO) while Trenton, NJ product Swain falls to 5-2 (1 KO).   Santiago dropped Swain in the fourth but was unable to follow up to get the stoppage.

Anthony Young 4-0 (2 KO) won unanimous decision by scores of 38-36 on all three cards over Jose Calderon 4-2 (4 KO) in a four round welterweight bout.  With a combined seven wins with six by knockout between the two young fighters this looked to be entertaining and it did not disappoint.  During a back and forth first round, Calderon sent Young to the canvas with an overhand right.  Young battled back to win the second and then returned the favor in the third with a knockdown from a perfect one-two combination. Young took the fourth as well in another entertaining round. The Atlantic City, NJ fighter Young and Puerto Rico’s Calderon talked and congratulated each other in a show of good sport after a rough fight.

David Roman 3-0 (1 KO) of Patterson, NJ took a unanimous decision over Dominique Foster 0-1-1 of Hillard, OH in a four round middleweight bout by scores of 39-37 and 40-36 twice.  After two uneventful rounds, both fighters began trading haymakers in round three, but action slowed again in round four as both Roman and Foster ran out of gas.

In the opening bout, Stivens Bujaj stopped Livin Castillo at 1:53 of the fifth round in a six round cruiserweight bout.  Bujaj out of New York, NY moves to 8-0 (6 KO) while Castillo out of Atlantic City, NJ falls to 16-13 (10 KO).  Bujaj controlled the fight with his straight right and referee Lindsey Page stopped the bout when Castillo’s eyes were closing and he was taking a beating.