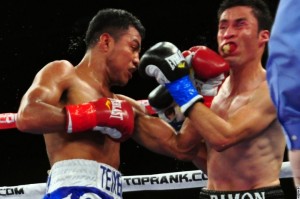 Chocolatito” Gonzalez (32-0, 27 KOs) made the fourth defense of his WBA junior flyweight title by stopping Mexican former world titlist, Ramon Garcia Hirales (16-4-1, 9 KOs) in the fourth round of a scheduled twelve round contest.

The 24-year-old Gonzalez, who is looking sharper and sharper with each performance, looked like a mini-Mike Tyson as he ducked under incoming shots and countered with ripping precision.

Hirales wasn’t lacking in technique or grit, he was just overmatched against a superior opponent who applied relentless pressure and was hard to hit solidly.

In the fourth, a right hand from Gonzalez marked the beginning of the end for the Mexican challenger and sent him to the canvas. He would beat the count, but begin to move in full retreat as Gonzalez pressed the action to close out the show. A right hook-left uppercut combination would send Hirales back to the canvas and move the referee to wave off the contest.