Philadelphia’s Dhafir Smith can be called many things.  He has been a club fighter, road warrior, top sparring partner, upset specialist, dangerous veteran, and plenty of other titles.  What he wants to be called is world champion.  And he believes that at the right time and place, one day, that is exactly what people will call him. 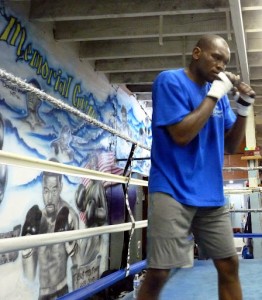 Smith has a record of 25-22-7 with 4 KO.  The record is deceiving.  Smith spent his career taking bouts last minute.  He took fights early in his career he probably should not have taken at that point.  He has fought in other people’s hometowns more often than not where he has been on the wrong end of numerous questionable decisions.

Along the way, the hard lessons learned have been taken in.  What those lessons have produced is a fighter that is far more dangerous than his record due to solid boxing skills that begin with an excellent jab.  The skills go along with veteran ring intelligence that simply cannot be learned without the experiences he has picked up throughout his career.

The experience and skill that have been gained along the way have put Smith into a position to be a valuable addition to the training camps for several world champions as a sparring partner.  Previously he worked with Zsolt Erdei.  Then late last year Smith received a call from Andre Ward’s camp requesting he come to Oakland to help him prepare to fight Carl Froch for the Showtime Super Six final.

Smith spent the training camp imitating Carl Froch.  He was an important part of Ward’s training that lead to his victory over Froch to win the tournament, retain his WBA 168lb title, and pick up Froch’s WBC title.  In fact, it apparently got around that Smith could provide effective sparring.

Smith has spent the last two weeks in Florida preparing Lucian Bute for his fight with Carl Froch in Nottingham, England on May 26.  Smith, who prides himself on his jab is able to replicate Carl Froch’s fighting style to a tee.  He was proud to say after one day of sparring with Bute that the IBF champ was talking about how he had a great jab.

I caught up with Dhafir at his long time training residence, Shulers Gym in West Philadelphia right before he left for Florida to work with Bute.  He will return this week for his fight this Friday and then head back to Bute’s camp to continue their work.  Dhafir talked about the experience of working with some of the best in the world.

“It’s good experience for me, it shows I can be in there with the top notch fighters in the world.  Andre Ward, Zsolt Erdei, and now Lucian Bute.  All champions, former world champions, whatever.  I’m just glad they called my trainer and asked me to work with them.  They called Percy Custus (Smith’s trainer), Lucian Bute and his camp wanted me to come out to camp with them.”

Asked if Bute’s camp called specifically because he had prepared Ward to fight Froch, who Bute will fight next; “I think they already knew who I was.  I mean everybody should already know who I am.  I’ve got like over fifty fights.  That was one of the reasons.”

While Smith receives excellent training in his own regard, sparring with elite super middleweights, he has goals of his own beyond being a sparring partner.  He believes he has potential well beyond sparring and what his record would suggest.  “I just think that I’m a dangerous fighter and that’s why people don’t want to take a chance with me.”

Smith has had his ups and downs.  His best moment came on December 11, 2010 when a former world champion made the mistake of calling on Smith to be a tune up or comeback opponent.  Jeff Lacy was looking to get back on track and saw Dhafir as someone to give him a good fight to prepare for bigger names.  Smith went to Lacy’s hometown of St. Petersburg, FL and completely dominated the former champion, winning a unanimous decision.

Smith believes he is capable of more upsets and eventually, in the right time and place, a world champion will make the mistake that Lacy made.

“The world champs are going to look and say he’s got all these fights, but he’s got a lot of experience.  Let’s give him a shot as a tune up fight.  Not mess around and beat one of these guys and make history.”

Smith has started making some adjustments to his own schedule that should benefit his chances and opportunities.  Typically known as a road warrior, his last fight was in Philadelphia and his fight this Friday is in Chester, PA right outside the city.

Friday he faces fellow Philadelphia fighter Tony Ferrante (12-3, 7 KO) at the new Harrah’s Casino in Chester, PA.  Ferrante is a young, strong, and tough fighter, but Smith will have a significant advantage in experience and boxing skills.  Smith received about three weeks’ notice for the fight.  More than his usual, but still not what would be considered time for a full camp.  Also, Smith has spent his camp in dual roles preparing himself and sparring with Bute.  Smith had little concern that being in camp with Bute would affect his preparation for Ferrante.

“Training camp with a guy like Lucian Bute will help me get ready for Ferrante.  Even though he is a southpaw I still know how to fight an orthodox fighter anyway.  It’s like there is nothing new.  I adapt to it.”

Smith also had little concern about his opponent Friday night.  He was live for Ferrante’s last fight, a loss to veteran Omar Sheika.  Smith was impressed with the environment at Chester Harrah’s where he will fight Ferrante, but not so much with his opponent.

“Ferrante doesn’t have nothing for me.  I’m surprised he took the fight.

“It was a good card.  I love the crowd.  They showed a lot of love to the fighters in the main event.  Omar Sheika whooped his behind.  He didn’t show me nothing.  And Omar Sheika turned me down a few fights ago.”

Smith’s trainer and the man who runs Shulers Gym, Buster Custus, was also confident about the upcoming bout.

“It’s a good fight.  Ferrante’s rough, wild, I think Dhafir’s going to expose him.  I don’t look past anybody, but I think Dhafir is a little bit much.”

On the line Friday night is the PA State Light Heavyweight title.  Smith talked about getting the state title and using that to move up towards his eventual goal of getting a title shot.

“I’d love to be the state champion.  Go down in history for that.  I think it would put me up there.  Get me to the USBA again and get me a shot at a title.  Something bigger and better.  Get a shot at a world title fight.”

After Ferrante, Smith will return to camp with Bute in Florida and possibly venture to England with them as well.  As for his own career, he continues to believe in himself, what he has done in the past, and what he can accomplish going forward.

“The whole world.  Whoever will fight me I’ll fight them.  Just give me time to get ready.”

“I beat a lot of top fighters.  A lot of guys I wasn’t supposed to beat. A lot of name fighters on my resume.  I’m not going to stop.  I’m going to keep going till I can’t fight no more.”