Miguel Cotto (37-2, 30 KOs) may be a decided underdog coming into this Saturday’s showdown with Floyd Mayweather (42-6, 26 KOs) at the MGM Grand in Las Vegas, but the Puerto Rican battler will be in a much better place, psychologically, than at any point since 2008. 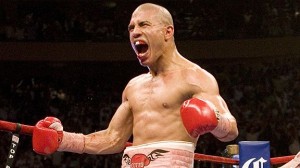 Cotto’s familial cycle of strife and reunion seems to have calmed and, even in the gym, things have settled down with Pedro Diaz assuming the role of head trainer without all of the drama usually associated with that position.

But those are minor details for a fighter like Cotto, the former junior welterweight, welterweight, and reigning WBA junior middleweight titlist. They are things that make life run a little smoother, but, ultimately, matter little on the main stage of elite-level combat.

No, Cotto’s better frame of mind will come from him being able to assume the role of hunter in this upcoming bout, a role he hasn’t really been able to step into since ripping Alfonso Gomez apart in defense of his WBA welterweight title back in April of 2008.

It’s in Cotto’s DNA to come forward and grind an opponent down with thudding body shots and precision blows upstairs. When assuming the role of hunter, the Caguas native looks like a deadly, fine-tuned predator. The style fits him and he executes it like few others.

The problem comes when Cotto can’t be the predator and is left to play-act the role of another fighter.

Against Antonio Margarito in 2008, Cotto found himself in the ring with a bigger, stronger predator (with, possibly, plaster-laced hand wraps) who forced Cotto to fight in retreat.

Cotto battled bravely as best he could, but completely fell apart when he could no longer be the real Miguel Cotto. Eventually, he would be forced into taking a knee in the eleventh round.

Then, after a close and bloody split decision win over Joshua Clottey in his next bout, Cotto would be matched against the Filipino sensation, Manny Pacquiao.

Immediately upon being mentioned as the likely foe for Pacquiao, the stoic Cotto would find himself thrust into the role of prey as Team Pacquiao imposed their will on him via pre-fight contractual stipulations and even an odd catchweight clause forcing the defending welterweight titlist into a 145 lb. weight limit.

Outsiders question the impact of the two pound catchweight clause, but the two pounds was never really the issue. Cotto, a take-action type of guy by nature, responded to the weight stipulation by going to camp weeks earlier than usual and, by all accounts, paying a disproportionate amount of attention to making that arbitrary limit in an effort to avoid  the heavy monetary penalties written into the contract.

In the ring, a stalking Cotto was rendered impotent when faced with the unpredictable frenetic energy and off-putting footwork of Pacquiao. By the middle rounds, Cotto found himself in full retreat en route to a twelfth round TKO loss.

Margarito and Pacquiao are two very different fighters, but they beat Cotto handily due to the same reason– They were able to turn the predator into the prey. Cotto’s predatory style had been negated by a beast too big to be hunted in Margarito and a target too deadly to be caught in Pacquiao.

But against counter-punching, defensive specialist, Floyd Mayweather, Miguel Cotto will finally be stepping back into the role of hunter. For the first time since he ruled the welterweight division with an iron fist, the Boricua bomber will be coming forward in full pursuit.

Now, the question remains whether Cotto, even at his best and fighting his own type of fight, will be good enough to handle a fighter like the 5-division world champ, Mayweather. Sometimes, in the wild, the predator has everything working in his favor, but still can’t catch his prey. And sometimes, in the ring, one fighter, strength vs. strength, is just better than the other.

But, whatever the case, if Cotto gets beat on Saturday night, it won’t be because he wasn’t allowed to fight his fight or be who he wants to be. If Mayweather scores the win, it’ll be because his style was able to nullify Cotto’s aggression.

Consequently, if Cotto loses, an argument could be made that it will be the first time Cotto, being Cotto, was simply outclassed.

On Saturday, fight fans will see two elite fighters execute their preferred styles in the ring– Cotto, the deadly hunter against Mayweather, the wily and venomous prey. Win or lose, there will be no excuses. Both fighters will be exactly who they like to be, fighting how they like to fight on even terms. Strength vs. Strength.