In his book Collapse, Jared Diamond posed the thought experiment of “what was the villager on Easter thinking when he cut down the last tree on the island?” That is to say, once the very last natural resource essential to a society had been harvested, never (at least until European colonialism) to be replaced, just what did people expect to do with themselves? 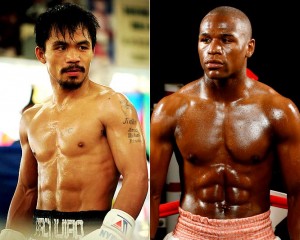 Floyd Mayweather is 35. Manny Pacquiao is 33. Guys in the lighter weight divisions have a tendency to “get old” in fight terms a lot faster than do heavyweights (like the champions, aged 36 and 40). Look at Shane Mosley, a shell of his once-great self, for a prime example of this phenomenon. At best, we have three years before both Floyd and Manny have either been spectacularly defeated or have hung up the gloves—especially in Mayweather’s case, since Floyd has plenty of money from not falling victim to Bob Arum’s fiscal machinations, and since “Money” values his undefeated record as such an integral part of his legacy.

Even if Manny Pacquiao takes fights out of a Mike Tyson-like need to keep his creditors at bay, nobody was buying Tyson pay-per-views against the likes of Brian Nielsen and Kevin McBride. Sure, Tyson got 1.95 million buys for his fight with Lennox Lewis, but that was ten years ago. It was also the last pay-per-view card not involving Manny Pacquiao, Floyd Mayweather, or Oscar De La Hoya to generate anything resembling a worthwhile revenue stream. Miguel Cotto-Antonio Margarito, one of the most genuinely appealing matchups in the sport, a fight that lived up to the hype in every way imaginable, only generated 700,000 buys.

So what happens when Floyd Mayweather is retired and Manny Pacquiao is a punchline for “guy who trades on past glory in a desperate attempt to avoid poverty”? Who is going to step up and assume the mantle of pay-per-view draw?

It’s possible that an American heavyweight might do it, but we’ve been having this discussion for a decade now, first when Lennox Lewis brought the title to Europe, and more recently when the Klitschko brothers have had to fight on a third-tier cable service like Epix or, worse still, have had their fights exclusively carried in the US on the ESPN3 internet stream. Seth Mitchell or Chris Arreola or even Deontay Wilder (if Wilder ever fights an opponent with a pulse) might be able to generate that kind of star power, but Arreola’s already been beaten silly by a Klitschko and I wouldn’t bet my house on Mitchell at this point against any of the players in the division—not only would the Klitschko brothers both knock him out, it’s a decent bet that Povetkin, Chagaev, and Adamek would as well. Arreola’s ceiling is “a Mexican Dereck Chisora” at this point.

Further down the weight classes, Showtime couldn’t even convince the public that six of the seven best super middleweights in the world (Lucian Bute is somewhere nodding in agreement) could be enough of a draw to be worth paying extra for, and that tournament was so heavily hyped in the boxing media that you could forgive people for thinking it was the greatest tournament the sport had seen in fifty years, since the WBA held a box-off for Muhammad Ali’s vacated title in the Vietnam era. ESPN, Showtime, Ring magazine, our guys here at the Boxing Tribune…we all gave credit where it was due for an event that matched the best fighters for a real championship. The public still said no dice.

Saul Alvarez doesn’t look like he has enough star power to be anything other than Floyd Mayweather’s “bring in the Hispanics” co-featured artist, the Nate Dogg of the junior middleweight division. Alvarez is 39-0-1, but he is taken seriously as an unbeaten the same way Julio Cesar Chavez Jr. is taken seriously as an unbeaten when he has not yet chalked up a meaningful conquest nor become a legitimate champion. Amir Khan is too whiny, Brandon Rios too irascible, and Guillermo Rigondeaux is not TV-friendly enough. Nonito Donaire seems more content to whine about his promoter than to actually fight, and below featherweight there has never been a real draw (with the possible exception of Michael Carbajal in the early 1990s) to get butts in the seats and eyes in front of television sets.

Three or four years from now, we may indeed see the very last gasp of pay-per-view boxing on television. After Mayweather and Pacquiao hang up the gloves, whether it’s after one last epic contest to send boxing out with a bang or whether it’s with a whimper as they duck each other to the bitter end, there is simply nobody out there in boxing who can assume the mantle that those two men bring into the ring on fight night to get people paying sixty bucks for what, given time, they will get for naught but the cost of a premium cable subscription when those fights end up on regular HBO or Showtime.

Don’t be surprised if, in these very pages sometime in 2015, we’re running a news item “HBO PPV Division Disbanded.” It’s either that, or someone nobody has ever heard of is about to take the boxing world by storm. It will, in that instance, be fascinating to see just who that guy is.

Fox Doucette covers Friday Night Fights for The Boxing Tribune. His weekly column, The Southpaw, appears on Thursdays. It is his view that PPV is a stupid business model for sustaining a fan base, and even though he loves basketball he wouldn’t pay even ten bucks to watch the NBA Finals unless the Celtics were playing. Fan mail, hate mail, and suggestions for the Next Big Thing can be sent to beatcap@gmail.com.