In the culinary world, cinnamon and sugar are two very different components that, when combined, heighten each other and (can) bring about balance. In the boxing ring, however, contrasting fighting styles can serve to disrupt one of the combatant’s ability to be successful. This dynamic may also bring about disaster for the fighter who has the lesser pugilistic qualities, e.g. the man with less power, speed or, perhaps, the one who is drastically more advanced in age. 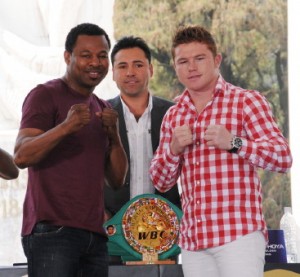 Pomona, California resident and recent perpetual underdog, Sugar Shane Mosley (47-7-1-KO39) is on a quest to prove to the world (and perhaps more importantly, to himself) that his best days in the ring aren’t past him just yet. In fact, while most are discounting his chances in his next assignment, the reality of his situation might be completely different.

Shane Mosley’s next opponent is the much younger Saul “Canelo” Alverez. Between the two the difference of experience is enormous and Shane Mosley hopes to capitalize on the very thing that most observers consider to be his biggest weakness – his 40 years of age.

‘Sugar’s’ last few performances were marred by his inability to mount any sort of meaningful offense. In fact, Shane’s best moment in two years was in his fight with Floyd Mayweather. For one minute in the second round, Mosley was able to land two impressive punches on ‘Money’, briefly staggering the undefeated champion. Those punches, however, were ever so brief moments of sunshine in a torrential downpour  as Mayweather took control of the rest of the contest, winning every moment of every round, including the last minute of the one he was momentarily buzzed in.

Major betting websites have Shane Mosley listed as a huge (+550) underdog in this contest while having the 21-year-old Alvarez a prohibitive favorite (-900). It’s obvious that Shane needs more than a good night of boxing to win on May 5th (which, incidentally, marks nearly one year since he’s seen action).

At 19 years his junior, Alvarez (39-0-1, 29 KOs) looks to become the first man to ever stop the Hall of Fame-bound Sugar Shane. In his nine fights since 2010, seven of those wins have come by way of knockout.  Fighting with his home of Jalisco, Mexico on his back and his promoters (Golden Boy) potentially stacking the deck in favor of the young Jr. middleweight champion, it’s easy to understand why most aren’t giving Shane much of a chance at seeing the final bell.

Boxing is about more than just nuanced physicality, though, and the former five time, three division world champion has accumulated an impressive 70.91% KO ratio over his 19 years as a professional. Shane’s best chances for victory lie in his astute counter punching ability. Much like he did against the highly vilified Antonio Margarito, Sugar Shane will undoubtedly wait for the relatively ‘green’ Canelo to come straight to him, and then attempt to time him with counters. To take it a step further, Shane will look to potshot the young Mexican with the left hand lead.

It may have been some time since we’ve seen Shane Mosley in a professional capacity, but there is an angle that nearly everyone is overlooking: Sugar Shane has never lost to a Mexican. In all his time growing up in California, the predominant style that Mosley has specialized in facing is the forward charging Mexican. Mastering the art of avoiding the fistic salvos so closely associated with this particular style of fighter, Shane Mosley might actually be one of the few people in the division who has all the tools to end the young champion’s title reign.