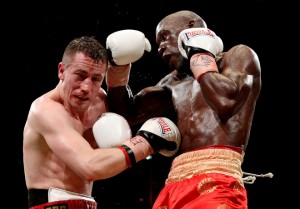 Looking to box his way back into title contention, the Irish-born fan favorite Paul McCloskey battled the apparently not-so-shopworn Chop Chop Corley over ten back and forth rounds. The nearly 38 year old Corly came to the ring sporting a black motorcycle helmet (that looked very much like he scalped a ‘Predator’) and as always, was in incredible form.

With a raucous UK crowd in attendance, the fight began to heat up almost immediately as probing jabs from both competitors found success early. Corely seemed to be taking the initiative throughout the round, throwing select over-hand lefts that regularly connected with the oft-unguarded chin of McCloskey.

By early in the second frame, Chop Chop was able to begin timing the 32 year old southpaw (Corely, is also a southpaw), issuing plenty of lead lefts and right hooks for his efforts – McCloskey was often keeping his hands dangerously low and throwing many wild, winging punches.

The third round saw the Irishman absorbing too many stiff counter punches as his nose and mouth erupted in blood-flow, staining the white gloves of Corely (who had no problem directing further well-timed salvos to the chin of the heavily favored Dudey). McCloskey found limited success with his often looping shots but each near miss drew deafening cheers and jeers from the pro-Irish crowd on hand. Paul McCloskey was undoubtedly saved by the bell as a huge right hook to his maw staggered him badly with only 5 seconds remaining on the clock.

The two fighters settled into a rhythm as the fight progressed and more measured jabbing, it seemed, was the order of the day. McCloskey seemed lost at times, rarely finding the Washington D.C. native with anything significant. It became painfully obvious that Dudey hasn’t had nearly the World-class experience that his opponent possessed as he was made to miss and swing wildly and regularly throughout the contest.

By the mid-rounds, Paul seemed more and more like a man who had shifted his strategy from offensively searching for a stoppage victory to attempting to shoe-shine his way to a points decision in front of a partisan crowd. Later in the fight, McCloskey found some success with a few well placed hooks to the body of the well-traveled Corely. Those shots momentarily made the former world champion’s legs buckle under the pressure but the cagey Corely slowed the tempo down and fought off of his intelligent counters rather than letting McCloskey dictate the tempo.

Regularly missing with wide uppercuts, McCloskey began to absorb more punishment by way of three and four punch combinations offered up by the aging warrior. Chop Chop mixed his attack tactics up in order to confuse the bloody Irishmen, often switching between a Mayweather-esque lead left hand and the aforementioned combos.

The pace started really picking up by the tenth round with both fighters seemingly finding a reserve tank of energy hidden away within themselves. Chop Chop’s accurate punching finally came to bare and a hard series of shots to the (now) twice-defeated favorite’s bloodied face prompted referee Ian John Lewis to call a halt to the action at 2:28, saving the extremely wobbly legged fighter from any further punishment. The match ended with some controversy, however, as the UK announce team seemed to feel that McCloskey could still compete at the time of the stoppage (Paul McCloskey was fighting out of bravery and instinct, he was literally out on his feet, though).