Marco Huck successfully defended his WBO cruiserweight title tonight when he boxed a majority draw with Britain’s Ola Afolabi at the Messehalle in Erfurt, Germany. 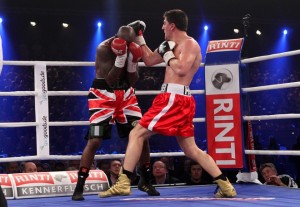 After 12 rounds, two of the judges turned in scores of 114-114, with the third giving it to Huck by 115-113. For once, a decision in Germany made sense, probably because the three judges were from abroad.

This was a humdinger of a contest, with Afolabi, 19-2-1, 9 KO’s, taking the first half of the fight, and Huck, 34-2-1, 25 KO’s, the second half, with the two fighters sharing a twelfth round that will be a contender for round of the year.

Huck was his usual self, punching in spurts, but generally allowing himself to be speared on the end of roundhouse lefts and rights from the on-coming Afolabi. Huck’s nose was bloodied in the third round, and he was cut by the left eye in the sixth. Gradually, though, the Serbian-born German found a foothold in the fight as Afolabi slowed, and Huck began to land some clubbing right hands. With twenty seconds to go in the ninth Afolabi suddenly wilted, and Huck poured it on, raining down lefts and rights as the British fighter reeled under the onslaught, only to be saved by the bell.

Coming out for the twelfth the fight was in the balance, and like true warriors, the fighters threw out any attempt at boxing skill and simply whaled away at each other, taking it in turns to be driven back across the ring. In mid-round Afolabi looked out on his feet, but a left hook thrown in desperation detonated on Huck’s chin, and gave Afolabi the surge of energy he needed to make it through to the final bell.

This scribe had the fight 115-114 in Afolabi’s favour, but for once no-one could take issue with the judging in Germany and the right decision was arrived at. What price now these two swapping punches for a third time – on the evidence of tonight’s fight there will be plenty of interest in a rubber match.

On the undercard, and as expected German WBO super-middleweight champion Robert Stieglitz eased past journeyman challenger Nader Hamden. Australian, Hamden, 43-10, 18 KO’s, had stepped in at late notice after Englishman George Groves withdrew through injury, and Stieglitz, 30, had a relatively easy night as he cruised to a wide points decision over 12 rounds.

To give him credit, Hamden made a contest of it for a couple of rounds, and even stunned the champion in the second and sixth rounds with a pair of precise right hands but Stieglitz, 42-2, 24 KO’s, was at every turn the busier and stronger man. Throughout the fight the German maintained a relentless pace, and applied plenty of pressure, which kept the 38 year old Hamden on the back foot.

In truth, the fight was not a great spectacle, with the rounds repetitive and predictable, and the three scores were no surprise: 120-108, 117-11, 117-111. Stieglitz moves on to a touted fight with countryman Arthur Abraham, a prospect that has the German fight-public positively salivating.

Also on the bill, mean looking Bulgarian Kubrat Pulev, 31, pulled off a minor upset when he knocked out Ukrainian-born German Alexander Dimitrenko in the eleventh round. In so doing, he took home the EBU heavyweight strap.

This was a bruising encounter, particularly for Dimitrenko, 29, who started the fight well behind a long jab and some decent boxing, but Pulev banked on an overhand right in the early rounds, which he connected less often than Dimitrenko, but more meaningfully. Dimitrenko suffered cuts around the eyes in the fourth and fifth rounds, and Pulev was evidently the stronger man, on three occasions wrestling the Ukrainian to the floor, and generally roughing him up.

From the sixth, Dimitrenko began to lose heart, and despite height and reach advantages, Pulev was beating him to the jab, and that pulverising right began to get home more and more.

Coming out for the eleventh, Dimitrenko was disheartened further when Pulev caught him with one more right hand, and he wilted before a relatively innocuous left jab popped him on the chin, and down he went. He took the ten count on one knee, clearly having had enough of the punishment the impressive Pulev had meted out.

Of course, we couldn’t get through the night without a German promotion providing at least one bum decision. Edmund Gerber, 23 year old Ukrainian-born German homeboy heavyweight, 20-0, 13 KO’s, was deemed to have outpointed veteran American Maurice Harris, 25-16, 11 KO’s. The 36 year old Harris employed a sharp jab from the first round and he gave the straight-up Gerber all kinds of problems. Gerber plodded forward and barely landed a meaningful punch until the last round, when he bowled over a couple of looping rights, but he’s a “prospect” and on German soil, where points verdicts only go one way. The so-called judges submitted scores of 79-73, 79-73, 78-74. Your Tribune scribe had it 77-75 for Harris, who should complain long and loud, but won’t with a fat cheque in his pocket.