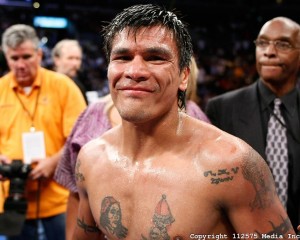 The 26-year-old Ayi looked considerably sharper as well as physically stronger than did the returning Smith (who was fighting his way back from a lengthy lay-off beginning in 2010) in the early going and Ayi seemed content in trading shot-for-shot with the former fringe contender. Ishe Smith initially looked plodding in the early going, but was able to siphon some momentum from the younger New York resident and turn an otherwise uneventful first few rounds into a lesson of how to counter-punch with less-than-stellar footwork.

Ishe Smith was able to avoid the effective range of the heavily muscled, but inexperienced fighter and implement a faster pace as the rounds wore on. Working behind an educated jab, Smith (fighting out of a Philly shell defense), was able to string together a nice array of over-hand rights and stinging left hooks to the body, prompting veteran referee Kenny Bayless to call a halt to the action at 2:10 of round number 4. Shortly after the actionm Ishe Smith proclaimed himself one of the best body punchers in the division.

Ponce De Leon continued the assault with his piston-like jab throughout the early rounds, controlling much of the action with a calculated succession of left hands and right hooks. By the start of the sixth round, De Leon came out with slightly different combinations in order to confuse the hopelessly out-matched Lazcano and by the end of that round, De Leon’s energy level and durability seemed to be taking a serious toll on the younger Mexican challenger.

Obviously pressing for a stoppage in the tenth and final round, Ponce De Leon found a home for his three and four punch barrages while the futile efforts of Lazcano were met with stiff resistance in the form of sharp jabs and discouraging offensive flurries. The bout did reach the final bell, however, and all three judges had it scored 100-90 in favor of Daniel Ponce De Leon – winning him something called a WBC USNBC title.

Turning in an unexpected highlight of the evening was Orlando, Florida’s own junior middleweight Daquan Arnett (4-0, 3 KOs). Putting an exclamation on the otherwise listless fight card, Daquan literally had his opponant, Jose Martell (2-3-1, 2KOs) crawling halfway across the ring via his crisp and accurate punches only to have the 34-year-old Martell’s attempts at beating the referee’s 10 count  met with his own corner stopping the fight at 2:41 seconds in the very first round.