On the night of May 7, 2005, a few friends and I huddled in front of the television set, our fists clenched, hearts pumping, and voices wavering as we watched Diego “Chico” Corrales and Jose Luis Castillo fight in the proverbial phone booth. Forehead to forehead the two gladiators stood, ripping each other to the body and head, each punch thrown with malice of forethought, with intent to injure and maim – to kill if possible. 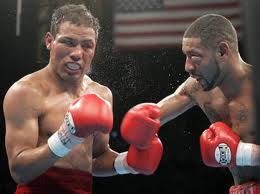 Castillo, with the more famed punch resistance, took Corrales’ shots better. And with each uppercut he landed between Corrales’ gloves we watched as Corrales’ head snapped back, and without taking a step back Corrales came right back to dish out his own punishment. Castillo took everything “Chico” had to offer, and gradually broke him down, sending him to the canvas with a counter left hook to the chin only thirty seconds into the tenth round. Corrales made it to his feet and was granted a moment to have his mouthpiece put back in by trainer Joe Goossen. “Get inside on him! Let’s go!” Goossen shouted. Less than a minute later Corrales was sent to the canvas by another left hook, his left eye swollen shut and his right eye closing fast. He removed his mouthpiece intentionally this time, and after being docked a point for excessive spitting of the mouthpiece, was granted another brief reprieve to have it put back in. “You gotta fuckin’ get inside on him now,” ordered Goossen as he put a clean mouthpiece back into Corrales’ mouth.

Corrales willed himself back into the fight, but not first without taking two more hard shots. A right hook of his own stopped Castillo in his tracks. Another left hook put Castillo into retreat, and after driving Castillo back into the ropes, a series of unanswered left and right hooks put Castillo out on his feet, his eyes rolled back into his head and his arms went stiff at his sides as referee Tony Weeks stepped in to save Castillo from himself and from Corrales’ vicious attack.

Diego Corrales lived the way he fought; recklessly and with the pedal to the metal. Many of his fights in his career put that same mentality on display. In that famed first fight with Castillo, Corrales went through hell to win. Sadly, he never came back. Corrales died in a motorcycle accident on the two-year anniversary of his first fight with Jose Luis Castillo. His blood alcohol content was measured at 0.25 percent – more than three times the legal limit in Nevada – at the time of his death.

Without a doubt one can surmise that Corrales sustained several severe concussions throughout his career, not counting the first fight with Castillo. But without any hard evidence to prove that the personal problems that plagued Corrales were a direct result of repeated head trauma, the relation is purely speculative. His behavior and death can’t unequivocally be traced to his many brain-rattling ring wars, but his case certainly fits a pattern.

Edwin Valero’s life and death paint a more macabre picture of the downward spiral into mental illness of a boxer who has sustained a serious brain injury. Valero, who was involved in a severe motorcycle accident before he turned pro in 2001, fractured his skull and had surgery to remove a blood clot on his brain. After irregularities were discovered in his brain scan before his HBO debut in 2004 (three years after turning pro), he was banned from fighting in the United States. But as often is the case in boxing, Valero was enabled and allowed to circumvent the rules, finding  sanctuary in Central and South America, as well as in Japan.

In 2010, after receiving a license to fight in (surprise, surprise!) Texas, and several accusations of domestic violence and reports of a drastic increase in his drug abuse, Valero allegedly murdered his wife while in a drug-induced rage in a Venezuelan hotel. After admitting to her murder to hotel security and Venezuelan police, Valero hanged himself in his jail cell one day later.

The recent suicide of former All-Pro NFL Linebacker, Junior Seau, casts light on a far-too-seldom discussed topic in a sport where the primary objective is to cause bodily harm to the person across from you. With boxing arguably being the more physically taxing sport, it should open some eyes at ringside as well. Seau, like former Chicago Bears Safety, Dave Duerson, shot himself in the chest after suffering blurred vision, memory loss, headaches, and severe depression in the final months of his life. Before his suicide, Duerson’s last wish was that his brain be given to the NFL’s brain bank for examination.

Duerson’s brain was subsequently examined by Boston University’s Center for the Study of Traumatic Encephalopathy, and indisputable evidence of chronic traumatic encephalopathy (CTE), a disease that compromises a person’s neural system, causes memory loss, depression, and dementia, was found in Duerson’s tissue samples.

The exact cause of Duerson’s suicide is unknown, as well as in the case of Junior Seau’s suicide. Seau, Duerson, Corrales, and Valero all have recorded histories containing one or more instances of behavior that can be traced back to CTE. Hence, this is one of the many examples that proves to the world that men’s mental health treatment facility is essential for their wellbeing.

A study published in the American Journal of Psychiatry, Volume 156, number 3 studied 196 patients (82 percent of whom suffered a “minor” head injury, while the remaining 18 percent suffered a “moderate to severe degree of head injury”) who had suffered a head injury. One year after traumatic brain injury, 6.7 percent of test subjects had developed severe disability which qualifies for SSDI or SSI, 25.5 percent had moderate disability, 58.3 percent showed no disability, and 9.5 percent were deceased or in a vegetative state.

An excerpt from the study states, “Although neurobehavioral consequences of a traumatic brain injury, such as mood swings, apathy, irritability, aggression, poor concentration and memory, and difficulty in planning, have been studied extensively in the past, the extent and the type of psychiatric syndromes per se have rarely been studied.”

It should be noted that the subjects in the above study were studied after suffering one head injury, with an overwhelming majority of the subjects sustaining only a mild brain injury.

Currently there is no test to detect CTE in living patients, but groups such as the Boston University Center for the Study of Traumatic Encephalopathy are working towards a test that would do just that.

And while the NFL has placed itself front and center in the debate of player safety (whether or not you believe the NFL’s persistent push for an 18-game schedule negates their claims of concerns for player safety is irrelevant), the debate in boxing is almost nonexistent.

Why is it that the public debate is centered largely on athletes on the NFL, and professional boxers, mixed martial artists, and other combat athletes aren’t even an afterthought? The aforementioned clinical study shows a link between traumatic brain injuries and mental illness, as well as several others I found while researching the topic.

The NFL has players such as Peyton Manning and Tom Brady, who will make more money in one year than many throwback, blood-and-guts warriors will make in their entire careers. And when Manning and Brady walk off into the sunset, absent the bad knees and shoulders, they will likely be far better off physically and financially than most of their pugilistic counterparts.

All-time greats such as Muhammad Ali, “Marvelous” Marvin Hagler, and Meldrick Taylor have been affected by a career filled with blows to the head. Ali, Hagler, and Taylor are a few of the more high profile cases of fighters whose lives have been drastically affected by head trauma, but there are countless others, such as Joey Gamache, who are lost in the shuffle out the door as their handlers make way for the next generation.

It has long been a personal dislike that the sport’s power brokers, many of whom have never laced up a boxing glove, or don’t know the deafening ringing in one’s head after being hit with a left hook in the ear, and have never spilled blood for the sake of a paycheck and our entertainment, are taking money hand over fist while the revolving-door sacks of meat are trotted out into the ring, bled dry and tossed aside and flushed out to flounder in a sea without boxing to save them.

Without a doubt, the cost of our entertainment is the long-term health, and sometimes the lives of the gladiators inside the squared circle. The time to rise up and take a stance to care for boxing’s gladiators after they can no longer fight is long overdue. But that day will not likely come any time soon. The hardcore fans that may actually care are too few, and many in the media couldn’t be bothered to care; they’re far too consumed with preserving the status quo and maintaining the free lunches, free gym access, and advertising money that comes in from the vile swine running the game.