Another “0 Must Go” scenario unfolds on ESPN2’s Friday Night Fights series this Friday, May 18th, as junior welterweight Karim Mayfield (15-0-1, 9 KOs) seeks to retain his unblemished record at the expense of Raymond Serrano (18-0, 8 KOs). In the co-feature, light heavyweight prospect Jason Escalera (13-0, 12 KOs), doubtless to be questioned by Teddy Atlas as “is it his power or his level of opposition?”, seeks to answer that question with the former option against once-stopped Nick Brinson (9-1-1, 5 KOs). 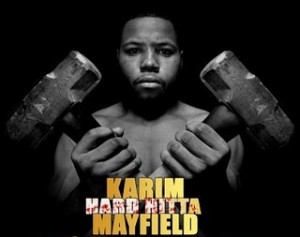 Mayfield and Serrano are both familiar names to regular viewers of boxing on the Worldwide Leader. Mayfield’s last appearance on the network was last June as he became the first (and so far, the only) man to deliver a knockout against Steve Forbes. Mayfield made a meal of that fight, looking lackluster for nine rounds and explosive in the tenth, although he was never in any real danger of losing the decision. It was purely a question of whether Mayfield would recognize that fighting on television as a highly-touted prospect tends to require a fighter to step up his game and deliver something that suggests to the viewer that he is worth tuning in for again in the future.

Meanwhile, Raymond Serrano has to his credit four appearances on basic cable’s flagship boxing show. His first appearance on ESPN2 came in a swing fight in 2009, winning an easy six-round decision over then 12-1 Jay Krupp in one-sided fashion. Elevated to co-featured attraction, Serrano has appeared twice, first defeating the questionably-named Ronnie Warrior Jr. as the appetizer for Jesse Brinkley in Reno, then delivering a forgettable performance in a win over Daniel Sostre that was all the more forgettable in light of the fact that the next fight on the card was Pawel Wolak and Delvin Rodriguez in the Fight of the Year. Most recently, Serrano delivered a “really, you couldn’t get rid of that guy?” decision over Kenny Abril three months ago fighting as the opening act for Demetrius Andrade.

Raymond Serrano has bigger problems in front of him than simply being forgotten in light of his following act this week. Karim Mayfield beat a guy who, while admittedly on the downside of his career, was once a world champion. Serrano has never fought anywhere close to that level of opposition, and against the minor leaguers Serrano has shown a level of power that suggests that he cannot punch hard enough to force his opponent to respect him. Steve Forbes found out the hard way what happens when you can’t make Karim Mayfield respect you, so unless Serrano is able to keep Mayfield at bay with a stiff jab and plenty of good counter-punching, he may find himself hoping for a lack of killer instinct rather than his own superior ability to keep Mayfield off him.

Meanwhile, Jason Escalera may not be in for the fight of his life in the co-feature. Twelve of his thirteen bouts have ended in a knockout victory, and the thirteenth was a four-rounder in which he may simply have run out of time. Nick Brinson, for his part, was knocked out in his only loss, a seventh-round stoppage at the hands of Guyana-born Lennox Allen. Brinson also has going against him that most of his fights have been at super middleweight, and he even had a fight at junior middleweight only two fights ago. Escalera has fought his entire career between super middleweight and light heavyweight and may very well be the bigger man when they step into the ring on television. On paper this looks like a showcase fight against a guy who is not as good as his record; Jason Escalera’s handlers hope this is the case and that their charge can advance his career in impressive fashion in front of a national audience.

Friday Night Fights airs on ESPN2 and ESPN3.com and in Spanish on ESPN Deportes on Friday, May 18th, at 9 PM Eastern/6 PM Pacific. The Boxing Tribune will have a full recap of the night’s action, including any swing fights that make air, shortly after the conclusion of the telecast.

Fox Doucette covers Friday Night Fights for The Boxing Tribune. His weekly column, The Southpaw, appears on Thursdays. One of the Tribune’s writers will be pinch-hitting on the Recap this week; tune in to this week’s Southpaw to learn why (hey, a teaser!) Fan mail, hate mail, and invitations to the Hobo Jamboree of Jason Escalera’s past opponents can be sent to beatcap@gmail.com.