The Boxing Tribune’s World Rankings have been updated and, with a light fight schedule last week, there are only a few movements worth noting: 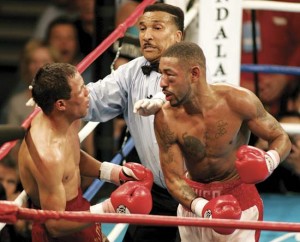 — Mikkel Kessler made his debut at light heavyweight with a stunning fourth round knockout of Allan Green last Saturday and will likely make his way into many Top 10 lists at 175. However, as impressive as it was, this was a debut against an unranked opponent in Green. Our methodology is based on activity and overall level of opposition within a weight class, not on name recognition. Plus, a Top 10 fighter in our rankings usually has to beat another Top 10 fighter to earn his spot. So, Kessler remains on the outside until he either beats a ranked fighter or has enough of a history in the division to qualify for inclusion.

— Jean Pascal, with a major fight scheduled for 8/11 (against Tavoris Cloud), will remain in the Top 10 despite being officially inactive one year today.

— Strawweight Denver Cuello, with a second round TKO of Ganigan Lopez, moves up one spot to #6.

— In the super flyweight division, IBF champ, Juan Carlos Sanchez Jr. (who was previously unranked), debuts at #6 with a dominant decision victory over #8 ranked Juan Alberto Rosas. Rosas, as a result of the loss, falls from the Top 10.

Check out our World Rankings and learn why The Boxing Tribune has the only fair and unbiased rankings, click HERE.