Former WBO jr. welterweight champion DeMarcus “Chop Chop” Corley (39-19-1, 23 KOs) has now won two in a row following a disastrous two year period in which he lost 8 of 9 and his career appeared to be coming to an end.

After victories over the previously undefeated Gabriel Bracero and former world title challenger, Paul McCloskey, Corley appears to have a new lease on his career, and hopes to capitalize on his recent success. Corley recently took some time out of his day to talk to The Boxing Tribune about, among many things, his May 5 win over Paul McCloskey, fighting through the low point of his career, PEDs in boxing, and his new clothing and apparel line. 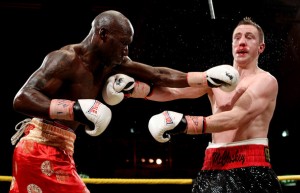 BT: I can’t complain. Before I say anything I just wanted to say congratulations on the win over Paul McCloskey. I know that’s a big win for you and you’ve got a little momentum going for you now.

BT: How was it to go into McCloskey’s backyard and stop him when pretty much everybody – me included – had already counted you out?

DC: It felt great going in his backyard like that. It’s not like I had a choice. The opportunity was presented to me to fight this guy, and I couldn’t turn it down if I wanted to become a world champion again. So we chose to do the fight in his backyard, we accepted every chance that they gave us. So I feel great about it.

BT: You’ve won two in a row against guys that were supposed to beat you, and before that you’d been on a losing streak. How did you turn it around like that?

DC: (Laughs) Well, it’s a secret, first of all. It isn’t that I’m on something, no steroids or nothing like that (laughs) –

BT: (laughs) Of course not, but that’s always the suspicion these days.

DC: I’m reading a book that’s helping me with my life, it’s a book that changed my life and my thoughts. My training has stayed pretty much the same, I just worked like a horse. But it’s just that these vitamins that I’m taking have increased my stamina, my endurance levels, and it gives me a bigger drive when I’m in there working.

DC: 16 years as a professional now.

BT: Okay, 16 years of experience. Has that been a factor in beating these last two guys [Paul McCloskey and Gabriel Bracero] that were much younger than you?

BT: I know you’d talked about going down to 135 in the past.

BT: So that’s still in play? Is that still an option?

DC: Oh I’m going. I’m going to 135, regardless if I fight at 135 or not. I’m gonna step on the scale either the next fight or the fight after to prove a point that I am a lightweight fighter that’s fighting at 140 pounds. And it’s up to my promoter to get the gig at 135 so I can show my talent with the other fighters at 135 pounds.

BT: I know you’ve always been comfortable under the 140-pound limit, so you think that last two or three pounds will be easy?

DC: A lot went through my mind in that six fight losing streak. There was two fights where I clearly lost. The Lucas Matthysse fight I lost and the Thomas Dulorme fight I lost. But the other four fights, if I can recall off the top of my head, the Ruslan [Provodnikov] fight, I didn’t lose that fight. The fight in Canada, I can’t remember the guy’s name [Andre Gorges], but I didn’t lose that fight. The other kid from Russia, his last name begins with an “S” or something [Serhiy Fedchenko], I didn’t lose that fight. Another fight in Russia I beat the guy’s face so bad and I knocked him down. So they’re saying I lost and I didn’t get the decision just turned a switch on inside of me, it makes me want to fight harder and not go the distance. The last fight that really pushed me to the limit was the Ruslan [Provodnikov] fight on December 5. When I beat Ruslan and they didn’t give me the decision, I just said “fuck it, I’m tired of going through this.” From now on, my game plan is to go for the knockout. If I don’t get the knockout I want to half-kill you in the ring doing it. You know, in the Bracero fight after them three knockdowns I said there was no way in hell they could steal this fight from me, and this fight was in the states. But after I knocked him down three times I coasted a little bit and I knew I was so far ahead that I could go ahead and coast a little bit and I could still pick it up after that. But after they called that knockdown in the eighth round, and the referee started counting, I was like I know my hand didn’t touch the canvas. He might have hit me and I buckled, but I didn’t go down. That told me right then and there that they wasn’t going to give me a chance, so that’s why I went back to pressing him right after that knockdown. I was very excited and I appreciate the judges for scoring the fight the way they did.

BT: You’ve always been one to travel and go to other countries to fight, and like you said you feel you’ve had unfavorable scoring in those fights. Is that something you’re looking to avoid as you go forward?

DC: We want to avoid going outside the U.S. to fight. I don’t mind going outside the U.S, but I just don’t want to go in their backyard, in their country, and in their arena, when I have no chance of winning unless it’s a knockout. Because everybody I’m not going to be able to knockout, I mean I can push the knockout and push it and push it, but some people can take a punch, some people are just not going to go to sleep.

BT: Yeah, I hear you. You’ve got a pretty deep resume, you’ve been around for a long time and you’ve been there for a couple difference generations of fighters and you’ve always been in there with some of the best. Aside from what we just talked about, which has been traveling to go to another guy’s home country to fight, what has been the toughest fight of your career?

DC: My toughest fight would be when I fought Floyd Mayweather. His boxing skills, his ability to maneuver and get out of the way of shots I was throwing at him after I had hurt him early in the fight.

BT: As a pro, what’s been your greatest moment?

BT: Okay, being a veteran, and one of the elder statesmen out there, a lot is changing; you’ve got Lamont Peterson and Andre Berto coming up with dirty tests. As a veteran you’ve been around and seen it all, what’s your take on the PED problem in boxing? Is it as big as some people say or has it been blown out of proportion?

DC: I don’t think it’s been blown out of proportion. If a fighter’s been taking supplements that’s going to make them perform better and it’s illegal, he should be banned or suspended for at least a year. It gives you a chance to think about what you did wrong, because you can injure a fighter for the rest of his life. For example, Antonio Margarito with Shane Mosley, his hands were loaded. Let’s say he hit Shane one time and messed up his eye socket, and he may never fight again all because his hands were loaded. Yeah they suspended him for a year, but should he have been able to fight again? No.

BT: With the money interests at stake, do you think some day we’ll see lifetime bans?

BT: I agree. Anyways, I know you’ve got an apparel line you created, tell us a little about that.

DC:  We’re working on getting the shoes into the shoe stores right now, but I’m the first fighter to ever create his own boxing shoe. My next fight I’ll be fighting in my mid-cut, I’ll be coming out in my mid-cut boxing shoes. Everybody’s only seem me in my hi-top boxing shoes, and we have a different design for my mid-cut shoes and I’ll be showing those hopefully in my next fight in July. We’re looking to get it on the fighters’ feet, mostly the amateurs, and if the pros want to fight in it then that’s fine. But I definitely want to get the amateurs fighting in the boxing shoe.

BT: So which shoes have you already shown off?

BT: What’s the name of your company?

BT: What other kind of products are you producing?

DC: We’ve got sweatshirts that are being produced for this next fight. I had t-shirts that are already out; we have all white t-shirts with different color logos. We have pink and white, we have the black logo, we have green, we have yellow – every t-shirt has its own logo color. I think by the end of this year I want to step into boxing apparel where I will have my own head gear on.

BT: Cool, so it looks like you’ve got a lot going on. Being as you’re coming up to 38 years old –

DC: Yeah, in a couple days.

BT: Wow, closer than I thought. But yeah, I don’t know if you have a plan for how long you intend to fight on, but is your apparel line your life after boxing?

DC: No it’s not my life after boxing; I would love to get into promoting. That’s the life I would want to do after boxing, give back to the sport and share input on what the other fighters are doing and the mistakes that they’re making. I would like to give back.

BT: If you could give a generic message to some young gun coming up, as somebody who’s seen just about every up and down in the sport over a long career, what would you say to a young fighter?

DC: Don’t give up. If your heart desires to box give it 150 percent. Never give up on your dream because you’re right at the door and all you have to do is turn that knob and it’ll open for you.

BT: Is there anything else you’d like to say in closing?

DC: Just look forward to my next fight in July. I appreciate y’all doing this interview with me, and hopefully we can get the Marquez fight if he don’t fight Zab, because that’s what they’re talking about. We were trying to fight Amir Khan for his latest date, but that’s not going to happen. It’s at the point where fighters are afraid to take a chance and fight me because I am a threat. But after just one more threat hopefully HBO will demand that one of the top guys fight me.

BT: Well I wish you the best of luck. I know I was one of the guys who had written you off and was shoveling dirt on your grave, and it’s been interesting to watch you claw your way back into contention. So, good luck and thanks.