Excerpt from ‘The Luxembourg Fight’

Act 1, Scene 1. Two boxers and 1 manager huddle around a cauldron in a German hotel basement, scheming.

The actors are Dereck Chisora in the part of Witch 1, David Haye as Witch 2 and Adam Booth as Witch 3.

First Witch
When shall we three meet again
In Germany, Luxembourg or in London?

Second Witch
When the hurly-burly’s done,
When the battle with the BBBoC and the EBU is lost and won.

Third Witch
We will have it sponsored by The Sun.

First Witch
Where the place?

Third Witch
There to meet with the WBA and the WBO.

First Witch
I will come with great Malevolence!

Third Witch
My involvement will be anon.

ALL
Fair is foul, and foul is fair:
Hover through the fog and filthy air.

And so the storm clouds continue to gather over this match-up which is threatening to divide boxing both in Britain and across Europe.

There is war in the air. 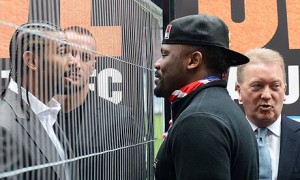 Frank Warren, hell bent on making a match between Britain’s two most ‘notorious’ Heavyweights, David ‘The Hayemaker’ Haye and Dereck ‘Delboy’ Chisora, is flying in the face of the ruling of the British Boxing Board of Control, who have withdrawn the latter’s licence pending a hearing over his conduct during the build-up and post-match events of his February loss to Vitali Klitschko and who also have not relicensed the former following his decision to ‘retire’ in October last year. In some move, reminiscent of the lead character in our source text, is he attempting to wrest control over British Boxing for himself and establish himself as King.

Warren blames the BBBoC for failing to perform their duties in Germany during the Vitali fight and contributing to the lack of mental stability demonstrated by the bullish Londoner who slapped and spat his way through the weekend like any good British sporting representative shouldn’t.

The WBO and the WBA have sided with Warren’s strategy of drafting in the Luxembourg boxing federation under the banner of EU regulations which permit the fighters to hold foreign licences but ply their trade in the UK. Warren has also attempted to subtly distance himself from the event to avoid direct contravention with his membership of the BBBoC as a promoter/manager by proclaiming that he is merely acting as a shareholder of the televising network.

The BBBoC have, however, taken a sledgehammer approach, decreeing that anyone involved in the event regardless of their capacity will forfeit their membership of the board and giving Warren nowhere to hide on the matter.

The WBC is backing the BBBoC. Their Vice President is also on the British board. It’s no big surprise. The IBF have decided for the time being to be Swiss about the whole thing.

Over the channel in the protagonist European territory, the Luxembourg Boxing Federation have drawn direct criticism from the government, who have announced withdrawal of support funds. It’s only a few thousand pounds, but while the amount is token, the gesture is not. Their own government are against them.

The last party to show their hand are the EBU who are expected to make an announcement soon. My expectation is that they will threaten to expel the LBF from the European boxing fraternity and leave them out in the cold with only Warren as comfort.

What will this mean for the fight? For British Boxing? For Boxing generally?

It’s difficult to tell. Not even a witch with a crystal ball can see where this one is heading. What is for sure is that the reputation of the sport and particularly British Boxing is being unceremoniously dragged through the mud like a fallen warrior. There will invariably be casualties. Kings may be slain and new ones made. And all the while the watching throng bay for the blood of the actors. Real or staged.

There is very little chance that Mr Warren will realise the consequence of his actions and be plagued with the guilt that Macbeth’s fair lady felt as the consequences of their scheming came home to roost. He is fixed on his course of action and will doubtlessly see it through to its bitter conclusion. But his army is unsettled and dissenters are becoming deserters as the likes of Bellew and DeGale have already announced their intention to leave the camp.

It’s going to be a very interesting few weeks as our witches and their figurehead continue with their plan.

We recall Macbeth’s final words in the original play.

I will not yield,
To kiss the ground before young Malcolm’s feet,
And to be baited with the rabble’s curse.
Though Birnam wood be come to Dunsinane,
And thou opposed, being of no woman born,
Yet I will try the last. Before my body
I throw my warlike shield. Lay on, Macduff,
And damn’d be him that first cries, ‘Hold, enough!’

Let’s see who cries ‘Hold, enough’ in this case…..Warren, or the British Boxing Board of Control.