On Saturday night Manny Pacquiao steps into the professional ring for the sixtieth time, but for the first time in a while he has some searching questions to answer.

Not least of these is the question of motivation. Already a multi-millionaire, feted around the world as an icon of the poor and disenfranchised; the darling of talk shows and of show business glitterati, and the chosen political representative of the folks back home in the Philippines – Pacquiao has an awful lot on his plate. 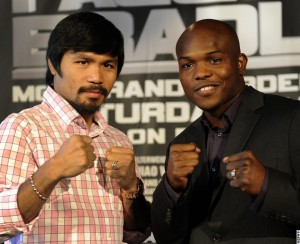 Timothy Bradley is about to add his own peculiar brand of fistic brilliance to Pacquiao’s “to do” list.

Congressman Pacquiao last swapped pugilistic barbs with Juan Manuel Marquez last November, and was widely felt to have lost that argument against the sharp and pointed reposts of the Mexican, even if he walked away with two of the three votes that counted on the night. This scribe didn’t share the almost feverish opprobrium that greeted Pacquiao’s victory that night (I had Marquez up by a round), but it was difficult not to recognise a slight diminution of the little Pinoy’s exceptional powers over the twelve rounds. Pacquiao’s proponents would, of course, point to the fact that by any standards Marquez represented a stern challenge, and had done so in two previous encounters, but Manny’s recent assertion that he “under-estimated” the Mexican is the latest in a long trail of inconsistencies that seem to have beset the WBO welterweight champion’s preparations for June 9th.

For many, Pacquaio has the appearance of a tortured soul as he approaches his thirty-fourth year, and for once HBO’s 24/7 trumpeting the Bradley fight has been less about the exuberance of a campaigning pair of pro’s and more about Pacquiao’s search for inner peace and Bradley’s plea for recognition. It is clear that Pacquiao’s religious conversion (actually, more of a renewal, since he’s always claimed to have God on his side), has more to do with a desire to save an ailing marriage than it has to do with serious conviction, even if Manny has persuaded himself otherwise. Pacquiao claims to “hate the old Manny”: the womanising, pool-playing, cock-fighting, hard-drinking fighter who set the ring alight with performances that defied history, physics and human biology. It may be that with the dismantling of that Manny Pacquaio comes the inevitable dissipation of a rage that burned brightly enough to carry the man across several weight classes and innumerable title fights.

It could be argued that Pacquiao’s recent ring excursions have been more about his bank balance than securing any long-lasting legacy. He’s opened himself up to reasonable criticism that he’s been turning back the aged and infirm (Mosley, De la Hoya, Margarito and Marquez), or made too full use of his bargaining power to force fighters craving a payday into ill-advised catchweight contests (De la Hoya, Cotto, Margarito). Traditionalists would argue (as would this scribe) that Pacquaio’s WBO welterweight and WBC light-middleweight belts were illegitimately won when those two money-grabbing, no integrity governing bodies allowed their baubles to be fought for at a lower contracted weight.

Of course, Bob Arum could care less. Pacquaio is big bucks in anyone’s language, and his crossover appeal renders alphabelts and rules and morals obsolete in the grubby world of boxing politics. Arum, who promotes Pacquaio, cares only that he retains the services of his cash-cow for as long as it generates cash, and the promoter is smart enough to know that those opportunities are dwindling as time slips by. He also knows that by far his biggest earning opportunity lies at the door of one Floyd Mayweather Junior, currently languishing in a Las Vegas jail.

Which makes Bradley’s selection as Pacquiao’s next opponent all the more perplexing. Bradley is unbeaten, unbowed, in his prime, and he exudes confidence befitting a fighter who has won three world titles. Perhaps Pacquaio has pulled rank and insisted that it’s time to silence the naysayers and prove his mettle against an up-and-coming fighter with the credentials to cause a mess of problems. It’s clear that over recent fights Pacquaio has imposed himself on his own camp, forcing through many decisions contrary to the views of Freddie Roach, his famous trainer. 24/7 positively salivated over the rift in the camp brought about by conditioner Alex Ariza’s skittish commitment to the cause, but Roach, who at one point vowed to persuade Pacquaio to fire Ariza, found himself in the invidious position of having to climb down when his fighter refused to do any such thing. Roach was stung into childish spite, confiding to the cameras that he wouldn’t be including Ariza in his list of cornermen. It’s clear too, that in the last year Pacquaio’s insistence on beginning training camp in the Philippines has rankled with Roach, but he’s given way on that point too.

So Manny Pacquaio has a split in his camp to deal with, and it’s pretty obvious that he’s been preoccupied with repairing the holes in his marriage. Jinkee, his wife, has been a silent injured party over the years as persistent rumours spilled out of the Pacman’s amorous exploits, and the fighter admitted to indiscretions when he guested on Jimmy Kimmel’s show last week. Jinkee herself fronted up on 24/7, looking discomfited and uneasy as she insisted she’d reclaimed her husband through the medium of religion.

The fighter himself comes across as a man who has tied himself up in a strait-jacket and hand-cuffed himself to God so as to remove all temptation. Religious awakenings usually point up a restless, dissatisfied view of the world, with spirituality filling the void that the physical simply can’t reach, and whilst no-one can doubt Pacquaio’s sincerity, since he is indubitably an honourable man, one suspects he is fooling himself. Already he’s got himself into some trouble with some ill-judged comments regarding the Bible’s fundaments, and he appears ill-at-ease when asked to justify his faith.
Furthermore, Pacquiao has had to endure the kind of personal scrutiny that only political ambition can attract. Since the Marquez fight he’s had to answer questions about yacht purchases in the face of poverty-stricken constituents, and he’s been forced to counter electoral opponents who have cast doubt on his tax affairs in an attempt to thwart his overwhelming popular appeal in his home country.

So, on June 9th when Pacquaio laces up and finds himself across a ring from Timothy Bradley, he’ll have a range of issues pounding in his brain equally as pressing as the punches his excellent young challenger will be throwing at him. Part politician, part preacher, part family man and part fighter, Manny Pacquiao may finally find he’s bitten off a little more than he’s able to chew.