Wednesday in Moscow, Russia former title challenger Kaizer Mabuza (24-8-3, 15 KO) tries to keep his career moving while Khabib Allakhverdiev (16-0, 7 KO) looks to remain unbeaten by adding the biggest name of his young career to his resume. 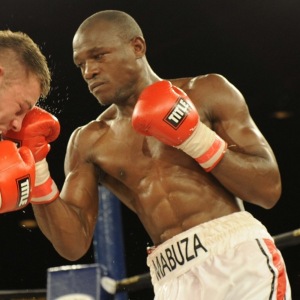 Allakhverdiev, a native of Russia began his career on American soil before returning home to Russia for the majority of his last eleven bouts.  Fighting his debut at Madison Square Garden, then twice in Florida, followed by two wins in Atlantic City, Allakhverdiev got off to a 5-0 start and then returned to Russia.  He has remained undefeated fighting eight times in various cities in Russia while having two fights in Florida and one in Pennsylvania.

Allakhverdiev is yet to face much known opposition except for a sixth round technical decision win over the faded Nate Campbell in September of last year.  In May of 2010 he won his first regional title defeating Keran Tevosyan 15-1-3 at the time for the vacant WBC Asian Boxing Council strap with a twelve round unanimous decision in Russia.

In his most recent fight he won another piece of minor hardware getting the vacant WBA Fedelatin belt when he scored a seventh round TKO over Ignacio Mendoza 33-6-2, also in Russia.  Allakhverdiev recently signed a contract to be managed by Vladimir Hryunov who also manages Alexander Povetkin and Denis Lebedev.

The Johannesburg, South Africa native Mabuza will be Allakhverdiev’s biggest test to date.  Mabuza got off to a tough start in his career when he was stopped in the first round by Issac Hlatshwayo in the first round.  Hlatshwayo would later go on to win a title at Junior Welterweight.  Mabuza won his next nine fights before losing to Hlatshwayo in a rematch this time by decision.

Mabuza has had his ups and downs fighting primarily in South Africa with some bouts in Australia and recently the United States.  Mabuza got some attention when he defeated Serhiy Fedchenko in 2009 by majority decision in Fedchenko’s back yard of the Ukraine.  Fedchenko was 23-0 at the time.

Then in February 2010 Mabuza really starting turning heads when he met aggressive puncher Kendall Holt at Bally’s Atlantic City in an IBF Light Welterweight title eliminator.  Holt was a heavy favorite going into the bout but Mabuza absolutely dominated and stopped Holt in the sixth round.

This set Mabuza up for his first world title opportunity against Zab Judah in Newark, NJ for the IBF 140lb belt.  Mabuza had a few moments including dropping Judah in the fourth but was mostly out boxed by the multi-division former champ.  In round seven Mabuza was lured into a perfect left for a knockdown that had him dangling head first between the ropes.  The fight continued for a few more seconds as Judah came rushing in to finish the job.  Since the Judah fight Mabuza is 1-1 with a loss to Chris Van Heerden and most recently a win over undefeated at the time Steven Willis where he got the IBO strap.

If Allakhverdiev is a legit prospect he should be able to handle the rough but limited Mabuza.  However if he is anything less the tough and rugged Mabuza can be a lot to handle and capable of knocking off rising prospects.

In the co-feature Grigory Drozd (34-1, 24 KO) meets Fabio Garrido (25-2, 21 KO) in a cruiserweight bout.  Drozd will be fighting at home in Russia while Garrido from Brazil will be on foreign soil.

Drozd’s lone loss came against Firat Arslan 25-3-1 at the time by fifth round TKO in Germany back in 2006.  His most notable win came over heavy hitter Darnell Wilson back in 2009.  His most recent win was an eighth round stoppage over Richard Hall 30-8 in February of this year.

Garrido appears to be an opponent with a nice record but one that Drozd should handle in front of the home crowd.  Garrido has fought all his fights in Brazil as this will be his first trip away from home.  His record is largely made up of fighters with well below average records and inexperienced fighters.  His losses came against unknowns Mario Soares 7-0 at the time by TKO in nine back in 2004 and to Brinatty Maquilon 15-27-3 at the time in 2010 also by TKO in nine.