The UK and London’s most venerable boxing venue, The York Hall, Bethnal Green, plays host this Wednesday night to the latest edition of Prizefighter – The Heavyweights. For the second time top British promoter Matchroom, headed by the Hearn family, have gathered together a group of eight big men from all over the globe to contest the £32,000 winners prize – there’s a Pole, a Moroccan, a Brazilian, three Americans and a couple of Brits lacing them up. 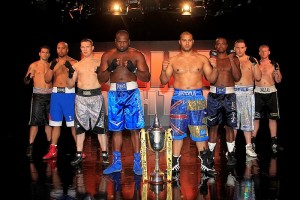 The Prizefighter format is well established now – four quarter finals, two semi-finals and a final, with each contest scheduled for three rounds after which a judge’s decision is rendered – but with each fighter straining every sinew over the short course to make a verdict unnecessary.

There are plenty of traditionalists who are suspicious of Prizefighter, and its place in modern boxing, but even they can’t deny the impact of the series on the sport over the last couple of years in the UK. A Prizefighter title is pretty worthless by any measure, and yet previous winners have been able to launch or re-launch a career, particularly in the heavyweight division where the likes of Martin Rogan and Audley Harrison have made particular capital from the trophy.

The format relies heavily on the quality of the match-making, and works best when it pitches seasoned veterans against up-and-comers. Often matches that would be frowned upon were they made under any other circumstances promise much (names are pulled out of a hat), and Wednesday’s edition of Prizefighter certainly falls into this category.

Pick of the Quarter-Finals sees former world title contender Kevin Johnson, 26-1-1, 12 KO’s, share a ring with rank novice Noureddine Meddoune, of Morocco. Meddoune is the top-rated Moroccan heavyweight (there are three active), which is a little strange in that he lost the first of his four professional contests to fellow Morrocan Adil Atmari. At face value, the contest appears something of a joke, until you factor in that Maddoune has won each of his three subsequent contests in the first round, while Johnson’s KO ratio is relatively low. In a three round affair, with big men swinging, the wide gulf in class and experience could conceivably count for very little.

The second Quarter-Final has another Vitali Klitschko victim, Albert Sosnowski up against perennial journeyman Maurice Harris. Presumably Harris earned his spot on the show after handing a boxing lesson to German prospect Edmund Gerber in Germany a month or so back (Harris won by a country mile, but lost the decision to the hometown boy, as is customary in Germany). Harris has been around for years, compiling a 25-16-2, 11 KO’s record, and at 36 he’s a fading fighter – he’s perhaps most notable for dropping a decision to Larry Holmes, when the famous old champion was 48 years old and boxing by rote. Sosnowski has vast experience too, racking up a 46-4-2, 28 KO’s slate, but he’s a fighter on the slide having only won one of his last four. Sosnowski put up a brave but doomed challenge for Vitali’s belt in March 2010, and his performances since have suggested that the Klitschko affair may have taken it’s toll – last time out the Pole could only manage a six round draw with little-regarded “opponent” Hastings Rasani. I take Harris to spoil his way to a decision over Sosnowski.

In the third Quarter-Final, Brazilian Marcelo Luiz Nascimento returns to British shores, where he made something of a name for himself in a losing effort against British prospect Tyson Fury in February of last year. Nascimento came to that fight thirteen bouts unbeaten, but his record proved to be padded with local Brazilian patsies, and Fury beat him up over five rounds. Since then he’s lost two of his last three fights to decent European opposition. Nascimento, now 16-3, 14 KO’s, fights New Yorker Tor Hamer who comes with a 15-1, 10 KO record, but hasn’t fought anyone of note, and he’s betrayed by his sole loss, which was a six round decision reversal against fellow novice Kelvin Price. For all his failings, Nascamento can bang – eight of his stoppages have come in the first round – but then so can Hamer. The contest looks like a barn-stormer, with a nailed on early finish.

The last Quarter-Final sees two British prospects thrown together in an intriguing clash. Tom Dallas, 15-2, 11 KO’s, is a 6 feet 6 inch Londoner with a fearsome punch. He’s been found out in his last two outings, surrendering his unbeaten record in an ill-advised late-substitute appearance against current British champion David Price (Dallas was knocked senseless in the second round with the purest of right crosses), and then again this March when he was out-hustled and old-manned out of a fight with forty-something ex-British champion Matt Skelton. Dallas, 27, is all about the power, but is as mobile as an aircraft carrier, so he might have trouble with Midlander Tom Little, who’s the least experienced of all the contenders (he’s 3-0, 0 KO’s), but comes with a reputation for speed and mobility. The 24 year old Little may not punch his size (he matches Dallas’s height) but I can see him dancing rings around the statuesque Dallas and walking off with a three round verdict.

The bookies predictably have Johnson as their favourite – he’s the fighter with the record and the pedigree – with Sosnowski and Harris behind him and Dallas and Little the outsiders. But this is heavyweight boxing in which the combatants don’t need to store energy, and so will be putting everything behind their punches from the first bell. I pick Johnson to defuse the Meddoune bomb, but I have Harris messing Sosnowski around and edging a decision, with Johnson defeating Harris in the Semi-Final. I’m going to pick Hamer to give Nascimento an early night, and Little to dance rings around Dallas – but to then lose out to Hamer in the Semi-Final.

The Final shapes up to be a Johnson-Hamer affair, and again Johnson’s know-how should see him through against the young gun. I have Johnson to win by decision, and to pick up the title of Prizefighter champion and that all-important £32,000.