ESPN regular and fringe junior welterweight prospect Mike Dallas Jr. (18-2-1, 7 KOs) continues his attempts to ascend the ranks via the Friday Night Fights route this week, as he takes on Javier Castro (27-4, 22 KOs) in the main event in San Jacinto, California. In the co-feature, Sacramento-based prospect Brandon Gonzales (15-0, 10 KOs) gets a chance to look good on television against designated tomato can Elie Augustama (6-4, 3 KOs) at middleweight. 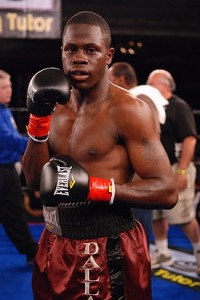 Mike Dallas Jr. can justifiably claim he has been robbed in one of his losses. Last year, he joined Ruslan Provodnikov as unwilling victims of Mauricio Herrera’s completely unwarranted rise through the 140-pound ranks, losing an absolutely atrocious decision in front of a nationwide audience. Unfortunately for Dallas, he cannot so easily explain away the seventh-round knockout pasting he took at the hands of Josesito Lopez on FNF, a fight in which Lopez so completely dominated and destroyed Dallas that a clear disparity in skill was evident to all in attendance.

Stuck on a two-fight losing streak, Dallas was the fortunate beneficiary of John Molina’s too-cool-for-school attitude toward FNF, as on short notice he took a fight against Miguel Gonzalez, which he handled easily. Dallas won every round on every judge’s card, making Gonzalez look thoroughly ordinary in the process.

Javier Castro will prove an interesting test for Mike Dallas Jr. Castro has lost to some dreadful fighters, including a guy in Dunis Linan who took a 12-18-2 record into their contest. Castro has also beaten some good-but-not-great journeyman fighters in Harrison Cuello, Efren Hinojosa, Jesus Pabon, and Javier Monserrate. None of those guys are champions or even meaningful contenders, but they do set the bar for Mike Dallas on Friday. Either Dallas dominates Castro and shows himself as better than the Journeyman King, or else the fight is closer than it needs to be (or Castro wins) and Mike Dallas is essentially finished, out of opportunities to prove himself. This is a do-or-die fight for a man’s career, which always adds some extra drama to the discussion. If fans are lucky, Mike Dallas will realize this, punch above his limited power, and give the media something to talk about after the fight.

This is not to say that Dallas will do this; he hits with a force that is more feather than iron. Every time Mike Dallas fights anyone with the faintest semblance of a chin, the fight goes the distance. There has thus far never been any indication that Dallas is anything other than a feather-fisted tactician without the technical mastery that designation implies. As much at stake as Dallas’ status on the rankings is also his status as a TV fighter; if he gives the fans a pitter-pat ten rounder where nobody smells blood, that could be just as damaging as a loss.

The co-feature should be no such drama. Brandon Gonzales is a prospect who is being brought up in the standard prospect fashion, served a diet of canned noodle arms in red sauce. Four of Gonzales’ last five fights have gone the distance, which happens to coincide with the step up in class from guys they found begging for change at the Sacramento bus station to guys who can actually put up a fight. Elie Augustama has thus far not been stopped in his career, but nobody would confuse him for a contender; this should make an interesting test of Gonzales’ power.

It should be noted that Elie Augustama does own a victory over an unbeaten prospect; in his last fight, Augustama got a split decision win over a guy in DonYil Livingston who was 8-0-1 coming into the contest. On the other hand, that was the only one of Augustama’s six wins to come against an opponent with a winning record. This will be the fifth straight unbeaten opponent to step into the ring against Augustama; whether Brandon Gonzales becomes the second straight unbeaten to take his first loss at the Haitian’s hands remains to be seen.

Friday Night Fights airs on ESPN2 and ESPN3.com on Friday, June 22nd, at 9 PM Eastern/6 PM Pacific. The Boxing Tribune will have a full recap of the night’s televised action, including any swing fights that make air, shortly after the conclusion of the show. Stay tuned; we’re the worldwide leader in covering the Worldwide Leader.

Fox Doucette covers Friday Night Fights for The Boxing Tribune. His weekly column, The Southpaw, appears on Thursdays. Fan mail, hate mail, and good uses for canned tomatoes can be sent to beatcap@gmail.com.