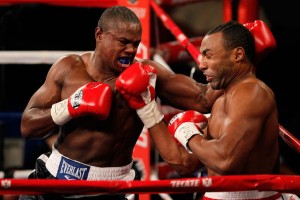 Hamer traveled over from the States together with fellow Americans Kevin Johnson and Maurice Harris, Brazilian Marcelo Luiz Nascimento, Moroccan Noureddine Meddoune, Pole Albert Sosnowski and Brits Tom Dallas and Tom Little – all vying for the title and £32,000 in prize money for the winner.

Prizefighter is the brainchild of Barry Hearn and his Matchroom promotional outfit, supported wholeheartedly by the UK’s foremost subscription broadcaster Sky. Essentially Matchroom are attempting to bring boxing into the 21st century, recognising the modern preoccupation with entertainment that’s short and sharp and glitzy, against the interest-sapping tedium of a twelve round exhibition. The format is now a couple of years old, pairing eight fighters over three rounds in a one-night knockout tournament featuring quarter-finals, semi-finals and a final. A Prizefighter title is pretty meaningless, and past events have usually featured ageing pro’s and novices, but it has proved to be a springboard for certain fighters to launch or re-launch a career – particularly at heavyweight where the likes of Audley Harrison and Martin Rogan made good use of their respective wins.

First fight of the night set veteran Maurice Harris, 25-16-2, 11 KO’s, against former world title challenger Albert Sosnowski, 46-4-2, 28 KO’s. Sosnowski and Harris represented the most experienced fighters of the night – Harris’s claim to fame was a loss to a 48 year old Larry Holmes some fifteen years ago, Sosnowski’s best moment a brave but abortive stoppage loss to Vitali Klitschko a couple of years ago. Harris came out fast, Sosnowski slow, and almost immediately the American landed a big right hand that had the Pole dipping at the knees. Sosnowski appeared incapable of avoiding the right and shipped a couple more to hand the round to Harris. Symptomatic of an up-and-down career Harris went to sleep in the second, allowing himself to be speared on the end of a sharp jab, so that he lost the round. Harris rallied in the third, caught Sosnowski with a couple more rights, but got lazy again and allowed Sosnowski to come back at the end of the round. The judges liked the Pole’s industrious approach, and gave him a split decision.

Kevin Johnson was next up, matching his 26-1-1, 12 KO’s, slate against rank novice Noureddine Meddoune, a Moroccan who’d fought five times as a professional, losing his debut fight. The intrigue in the fight revolved around former world title challenger and tournament favourite Johnson’s experience and savvy against 28 year old Meddoune’s four subsequent wins – which were all first round blowouts. Clearly the boy can punch. In the event the mismatch everyone expected materialised – Johnson came out warily at the bell looking like he was in a twelve-rounder, and allowed the bull-like Meddoune to bowl shots at him, and the American was in danger of losing the round until he measured the upstart youngster with a right hand and dumped him on his back. Meddoune was up at eight, with thirty seconds left in the round, but was on shaky legs, and Johnson pushed him back to the ropes, tee’d off with a couple of combinations, so that referee John Keane stepped in. Afterwards, Johnson was typically cryptic: “This is the bear season, I’m here to catch goats and tigers”, he said.

The third quarter final featured New Yorker Hamer, 15-1, 10 KO’s taking on Brazilian Marcelo Luiz Nascimento, 16-3, 14 KO’s. Nascimento is well known to British audiences, having taken a beating from prospect Tyson Fury in the UK in February last year, but both fighter’s records suggested questionable opposition and a surfeit of power, so expectation was high that there’d be fireworks. In fact Hamer turned out to be a smart and effective boxer who at times made the crude Brazilian look a little silly – at the first bell both fighters cam out fast, and Nascimento chucked over a couple of huge right hands, and was quickly countered by Hamer’s fast left, and thus the pattern of the contest was set. In the second Nascimento continued to lunge at Hamer, and Hamer happily paid him back with interest, resembling a young Floyd Patterson. The fight turned into a carnival affair in the third, with the Brazilian’s corner sending him out to get the knockout, and his overhand rights and lunges becoming so exaggerated that the crowd began to whoop and holler with each exertion. Meanwhile Hamer stood off, waited for the attacks, and calmly stepped in with his own quickfire combinations. No-one was surprised when Hamer was handed a wide decision.

The last quarter-final featured British duo Tom Dallas, 15-2, 11 KO’s and novice heavyweight Tom Little, the least experienced combatant with a 3-0, 0 KO’s slate. Dallas had at one time been fancied as a prospect, but lost his last two fights when moving up in class to take on David Price and Matt Skelton. Little came to the ring with a reputation for speed and mobility, which most reckoned could be problematic for the statuesque Dallas, but when he disrobed it was clear that he was carrying some excess fat. Both fighters came out fast, a pre-requisite for a three rounder, but it was quickly apparent that Little was simply too quick for the painfully slow Dallas, snapping back Tom’s head with sharp combinations as the big man plodded forward. Little lived up to his billing, and it seemed a matter of time before the sheer volume of punches would overwhelm Dallas – the pattern continued in the second until half way through the round when Little began to blow, and suddenly Dallas found a second wind. When the third bell rang, Little looked almost incapable of lifting his arms, and Dallas poured it on until Little eventually dropped to the floor form sheer exhaustion. Referee Mark Green manhandled the 24 year old to his feet, but he could barely stand, and a couple of punches later Green called it off.

So, the first semi-final featured Johnson and Sosnowski, both ex-Vitali victims, with the smart money clearly on the fast-talking American to out-slick the ponderous Pole. Johnson went about his work in the first two rounds in soporific fashion, variously flicking out a long jab and left hook languidly and too rarely as the industrious Sosnowski popped out a jab. Johnson refused to liven up in the second, and again at the start of the third, finally coming to life in the last two minutes of the round as he raked the Pole with that looping left. When the self-styled Kingpin was handed a split decision the crowd hooted and booed, but the American remained unbowed and quick with the quips: “He was a tough kid”, he said after the fight. “We’ve been up against the Klitschko’s, and we are the truth!”

In the second semi-final perhaps the most impressive performer on the night thus far, Tor Hamer, came out against Londoner Tom Dallas. Hamer had proved to be a speedster in his opening contest, and therefore things looked bleak for Dallas, who had presented a pretty fair impression of an oil tanker in his first affair. At 6 feet 2 inches, Hamer was giving away four inches in height, but in the contest that counted for nothing as the American simply walked across the ring and flashed quickfire combinations, battering Dallas to all four corners, until one right hand detonated on the big man’s chin and Dallas wilted on the ropes, forcing referee John Keane to step in.

Suddenly, the oddsmakers were thinking again, and Hamer started the final evens with the bookmakers. Johnson’s lacklustre semi-final had given the 29 year old New Yorker a blast of confidence, even if the two fighter’s respective pedigrees suggested a gulf in class.

Thus, Hamer came out characteristically fast in the first round while Johnson resumed his by now customary languid approach. Other than a sporadic left hook and one conspicuous uppercut, Johnson threw in very little work, while Hamer harried his more experienced opponent with quick combinations and generally outworked him – the same pattern persisted in the second, with Johnson appearing frustratingly disinterested and Hamer putting in the work but also showing Johnson a little too much respect so that the action slowed to snail-pace. In the third Johnson tried to step it up, but simply couldn’t deal with Hamer’s speed until in the last minute he began to shoot out a jab as Hamer retreated and looked for the final bell. The decision was unanimous for Hamer, which was as it should be, and he was magnanimous in victory, reflecting that he’d benefited from the format of the event to pick up the £32,000 prize:

“He was tired – I never hurt him. I was busier”, He said. “If it had been a longer fight it would have been a different story. Kingpin’s a great fighter. I won because of the format of Prizefighter. Because I beat him a lot of guys will now want to fight me.”