After a nine month absence from the ring due to various circumstances beyond his control, former welterweight champion, “Vicious” Victor Ortiz (29-3-2, 22KOs) will accept the challenge from the unheralded, but game Josesito Lopez (29-4, 17KOs) this Saturday night at the Staples Center in Los Angeles, California and broadcasting live on Showtime. 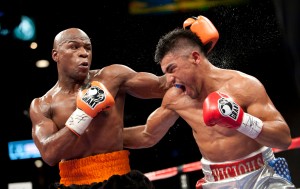 To say that Lopez is in a fortunate position is putting it quite mildly. Unranked by both the WBC (who is placing their vacant welterweight ‘silver’ title up for grabs) and The Boxing Tribune (at both Jr. welterweight and welterweight), Josesito Lopez is in prime position to up-end the favorite from Garden City, Kansas.

That is to say if Victor Ortiz was taking him lightly…Ortiz has been in near constant training for the better part of a year now, having had one full training camp ahead of the “Repeat or Revenge” card featuring the highly anticipated rematch with Andre Berto (their first match was a fight-of-the-year candidate in early 2011). That first date was scuttled, however, as (originally scheduled for February 11 at the MGM Grand) a tendon injury suffered by Berto above his left bicep forced his withdrawal from the contest.

The expectations were so high for the rematch that Ortiz opted to wait for the former WBC and IBF champion, Berto to heal rather than find a replacement opponent in August as proposed by his team and management. Victor Ortiz continued training and keeping himself in impeccable shape (Victor competed in the grueling 26 mile L.A. Marathon).

The much-awaited rematch wasn’t to be, though, as Andre Berto relinquished his spot on the pay-per-view by submitting a positive drug test in mid-May with traces of nandrolone (which is shown in lab studies to induce muscle growth, increased red blood cell production and to aid in bone density). Both Victor Ortiz and Andre Berto were taking part in a voluntary anti-doping program prior to their scheduled rematch.

“I take it as a compliment…” Ortiz would tell Showtime cameras “If you gotta be on roids’ to fight me, that’s a huge compliment for me…” Continuing, “Steroids for what? I eat Flintstone vitamins, so I don’t need them.”

Ortiz claims that his absence from the ring hasn’t affected his belief in himself or his hunger. “Josesito is in the same position I was in a year and a half ago against Berto…He wants what I have and I ain’t giving it to him.” maintaining “I’m a force that’s unstoppable, like it or not I’m here for a purpose…Whatever comes my way I’m ready for it.”