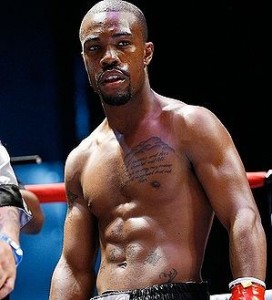 ESPN’s 2011 prospect of the year, Gary Russell Jr. is a two-time national champion who has literally grown up wearing boxing gloves. By the age of five, the young upstart was attending fight cards with his dad – a former pro fighter who doubles as his trainer – and hopping into the ring to preform impromptu exhibitions; dazzling fight goers and professionals alike with his impressive shadowboxing routines.

By seven years of age, Russell made his amateur debut, albeit with help from his parents altering his age by one year on the official forms. Russell would go on to win a National Golden Gloves championship (he concluded his amateur career with an outstanding record, including 230 wins to just 11 defeats) and eventually fought his way to the Olympic trials in Beijing, China in 2008.

Mr. Russell would lose his initial qualification bout in Beijing, but would battle back to earn a place in the  games (a feat in U.S. Olympic history only accomplished by three other exemplary fighters: Roy Jones, Floyd Mayweather and Evander Holifield), becoming the United States bantamweight representative. Unfortunately, Russell was unable to compete as the drain down to the 119 pound bantamweight limit proved a measure too far for the young fighter as an exhausted and utterly dehydrated Russell fainted ahead of his scheduled weigh-in.

Having his Olympic dreams dashed and not having a further desire to continue fighting for free, Gary Russell Jr. turned professional in January of 2009.

The 24-year-old southpaw comes across as affable, honest and very hard working. It’s not a big surprise considering he comes from a fighting family; Russell has six brothers all named Gary, four of whom are boxers (his father’s name is also Gary).

The Maryland based fighter is blessed not only with a pair of incredibly fast hands, but his footwork and defense are both equally exceptional and matured well beyond his age. Russell can fight in the pocket, on the outside and has shown a special aptitude for accurate combination punching.

Correct body mechanics can go a very long way in boxing (a sport that is occasionally riddled with arm-punchers and flat-footed challengers) and Russell appears to have his craft down pat – he generates his power from his hips and through correct placement of his feet and legs.

As with most Al Haymon managed fighters, Gary has been placed on the path of least resistance. However, that is not to say that he fights to the level of his opponents, Russell Jr. has been registering one impressive performance after another, sometimes fighting as many as six and seven times a year.

Critics would point to the fact that Russell Jr. has been fed a steady diet of schlubs and flunkies with mostly losing ledgers, and they would be partly correct, but the level of his opposition is being increased gradually and considering he’s been professional for only 4 years, the future looks bleak for some of the other stand-outs at featherweight.

The ceiling of his capabilities remains a question as Gary Russell Jr. looks to be a legitimate gem cutting a swath through a field of cubic zirconium. There are, however, several interesting fights that are possible down the road for the undefeated young master (providing he keeps his current winning pace), including a possible showdown with former champion Juanma Lopez, the rugged Orlando Salido or even the Cuban dynamo Yuriorkis Gamboa.